Walmart vs. Amazon: Battle of the Behemoths

This article was published by The McAlvany Intelligence Advisor on Monday, April 3, 2017: 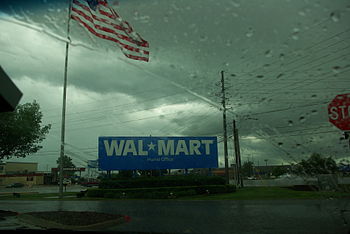 In one corner is Amazon, the book-seller that Jeff Bezos founded in 1994 that is now the most valuable retailer in the United States as measured by market cap: $425 billion as of March 31. In the other corner is Walmart, the world’s largest retailer when measured by revenue – $485 billion in 2016.

Amazon’s path to the finals is littered with the bodies of its former competitors, some still twitching but whose death is certain: Sears, J.C. Penney, Abercrombie & Fitch, Macy’s, and Target. Walmart is determined not to be carrion in this epic battle.

Accordingly, Walmart has made some serious moves by investing billions not only in remodeling thousands of its existing brick-and-mortar stores but, more importantly, in expanding its existing technology. Last Thursday it moved three of its top IT people into senior management positions as it responds to the changing shopping habits of its customers. The company’s focus is handheld devices, which are now “the linchpin of a customer experience that blends online and in-store shopping,” as noted by Kim Nash in the Wall Street Journal. It is focusing in areas where Amazon has no presence: groceries and prescriptions. The company is working on technologies that will let pharmacy customers order refills online through their mobile app and consequently reduce the time waiting in line to pick them up to as little as five minutes.

For those shopping for groceries online, the improved technology will not only allow for easier ordering, but easier paying as well through its Walmart Pay mobile payments technology. It will also announce the arrival of a customer to pick up his order so that he spends less time waiting there as well. In addition Walmart is expanding its non-grocery pickups as well, giving it another advantage over Amazon’s Prime, which typically provides two-day delivery.

Walmart tried a blatant frontal attack on Amazon’s Prime membership, which costs $99 a year, when it offered its Shipping Pass at $49. When that strategy failed to move any significant portion of Amazon’s 35 million Prime customers over, it dropped the fee to zero.

The company had a heart-to-heart conversation with top management of CPG (consumer packaged goods) suppliers last month just outside Bentonville to inform them of the company’s new objective: to have the lowest price on 80 percent of its sales. The pressure was applied to top people at Procter & Gamble (Tide, Pampers, Gillette), Unilever (Dove, Hellmann’s, Lipton), PepsiCo (Pepsi, Mountain Dew, Gatorade), Mondelez (Oreo, Nabisco, Dentyne), and Kimberly-Clark (Kleenex, Depends, Kotex) in that meeting.

They were informed that in order to meet that objective, makers of these CPGs would have to shave at least 15 percent off their wholesale prices in order to stay on Walmart’s shelves. Otherwise, said upper management, the company would pull any products not meeting the new standard and replace them with private brands.

Consumers will likely notice the difference shortly: some products will be missing, others bearing private labels taking their place. The packaging on the old favorites will change, reflecting efforts to improve shelf visibility and turnover and reduce shipping and handling costs. They will not notice that CPG makers will cut a deal with Walmart to help with shipping costs when they order online.

Customers will not notice the results of Walmart’s $3 billion purchase of Jet.com last summer, a move to obtain the services of its president Marc Lore. Lore was given a mandate to do for Walmart.com what he did with Jet.com: cut 15 percent off any other online retailer’s price, including Amazon’s.

Amazon is hardly waiting around to respond to Walmart’s moves. While Walmart is focusing “on items customers shop the most, including household essentials such as baby necessities, pet products, food like cereal and peanut butter, cleaning supplies and beauty favorites, as well as top electronics and toys,” according to a company spokesman, Amazon is selling the world just about everything else. As of December, Walmart offers for sale, in-store and online, 4,259,605 products. Amazon? 356,227,986 products. Or, put another way, Walmart sells barely one percent of what Amazon does. And Amazon continues to add new products as they become available.

This is a war the free market engages in eternally, a war in which all parties to the conflict benefit. First and foremost is the consumer: He has more choices, faster service, more convenient shopping, lower prices, all with less hassle. In all ways that can be measured, the consumer is benefitting from this war.

In addition, both companies will get larger, they will hire more people (even as they go robotic), they will pay them more (especially as they become more adept with both companies’ increasing concentration on technology), their suppliers will find ways to become even more efficient, and their stockholders will enjoy better returns.

The only losers are those who have already left the field, or will do so shortly: Sears, Target, etc. Everyone else even remotely involved in the conflict benefits. The ripple effect can scarcely be measured. After all, the free market is built around one single theme: how can the customer with the money be better served at lower cost?

Recode.net: Amazon and Walmart are in an all-out price war that is terrifying America’s biggest brands

The Motley Fool: Amazon vs. Wal-Mart: Which Has the Better Shipping Deal?

Fortune: Amazon and the Race to Be the First $1 Trillion Company

What Is Jet.com? And How to Use It

How many products do Walmart and Amazon sell?

attack Free Market private ripple effect Technology War
This entry was posted on Tuesday, April 4th, 2017 at 5:35 am and is filed under Free Market. You can follow any responses to this entry through the RSS 2.0 feed. Both comments and pings are currently closed.
Many of the articles on Light from the Right first appeared on either The New American or the McAlvany Intelligence Advisor.