This article appeared online at TheNewAmerican.com on Friday, March 24, 2017: 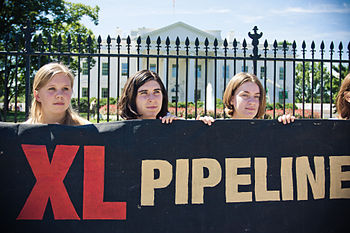 With the signing of the cross-border permit by the State Department on Friday, the real work on completing Phase IV of the Keystone Pipeline from Canada to refineries on the U.S. Gulf Coast begins. TransCanada, the owner and operator of the pipeline, still thinks the project is viable economically even though it has been stalled for 16 months by the previous administration. In a press release, TransCanada’s CEO Russ Girling said:

This is a significant milestone for the Keystone XL project. We greatly appreciate President Trump’s administration for reviewing and approving this important initiative, and we look forward to working with them as we continue to invest in and strengthen North America’s energy infrastructure.

He’s also very interested in recouping the costs already sunk into the project since it was first announced in 2008.

The project has been a lightning rod for environmentalistsm who have labored mightily and, until recently, with great success in delaying and questioning the need for the pipeline short cut through Montana, South Dakota, and Nebraska. The first three phases already in place deliver more than a million barrels a day of crude oil from the Canadian tar sands deposits, and completion of the fourth phase will expand that capacity. When completed it will allow light crude from the Bakken Formation in Canada and North Dakota to flow more efficiently (by mixing with the heavier Canadian crude and travelling through larger diameter pipes for a shorter distance) to refineries in Roxana, Illinois and Port Arthur and Houston, Texas.

The project has a long way to go. Environmentalists have threatened more lawsuits, especially concerning the Sand Hills of Nebraska where the pipeline is planned to be built. Diana Best of Greenpeace is gearing up for the new fight: “We will resist these projects with our allies across the country and across borders, and we will continue to build the future the world wants to see,” she declared.

That world she wants to see involves using rail cars and tank cars to continue to move the crude demanded by customers and consumers all across the country and the world.

Perhaps she envisions a world where towns are wiped off the map when oil-laden rail cars derail, as in the Lac-Megantic rail disaster in July 2013. Nearly 50 people there died and almost every building was lost by the resulting fire.

According to the Fraser Institute, resistance by such groups as Greenpeace “is sending oil to market by modes of transport that pose higher risks of spills and personal injuries such as rail and road transport.”

Assuming the project is approved by South Dakota and Nebraska (where regulators from the state’s Public Service Commission will be holding public hearings on the project), and allowed by the courts in the coming lawsuits, the project will take between one and two years to complete. It will require more than 40,000 construction workers including those who actually put the steel pipes into the ground along with all the support services that will be required. The Canadian Energy Research Institute puts the total estimated jobs created over the next 20 years at more than 100,000, while the American Petroleum Institute is even more optimistic, at closer to 500,000.

The pipeline is expected to generate tax revenues for the states through income taxes, property taxes, and land leases which are estimated to total $20 billion over the project’s lifetime.

And this fails to account for any impact that lower oil prices might mean for the average American family, who not only drives but also uses and consumes petroleum by-products ranging all the way from golf balls and bicycle tires to antifreeze and guitar strings.

In light of all these benefits, and especially TransCanada’s willingness to move ahead with the project despite all these years of delays, the ultimate beneficiary will be the American and the world consumer of energy.

The best part is that it’s hardly likely that the completion of Phase IV of the Keystone XL Pipeline will take another nine years.

Economy Energy Environment green impact Jobs lawsuit North Dakota Oil Prices Texas
This entry was posted on Saturday, March 25th, 2017 at 6:39 am and is filed under Energy, Free Market. You can follow any responses to this entry through the RSS 2.0 feed. Both comments and pings are currently closed.
Many of the articles on Light from the Right first appeared on either The New American or the McAlvany Intelligence Advisor.