This article appeared online at TheNewAmerican.com on Monday, March 13, 2017: 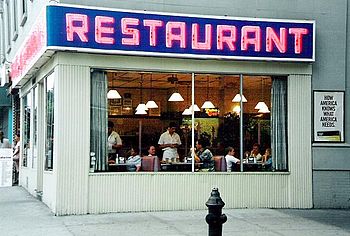 Instead of increasing their menu prices in response to increased minimum-wage levels, restaurant owners are burying their increased labor costs at the bottom of each tab. The increase, between three and four percent, only comes after the customer has completed his meal. The increase also increases the tip customers leave behind as most customers leave a gratuity based on the check’s total. This is going to raise the average customer’s check, which has already increased by nearly 11 percent since 2012, close to five or six percent.

Some restaurant and fast-food owners aren’t burying the increase but are instead calling attention to it so that customers know that they’re the ones actually bearing the brunt of the forced increase in the minimum wage. Sami Ladeki, the owner of six Sammy’s Woodfired Pizza & Grill restaurants in San Diego and eight others across California, used to call it a “California mandate” but removed it after getting a call from the city attorney. Ladeki, who says he makes a profit of around one percent charging $12 to $14 a pizza, told the Wall Street Journal: “This is not sustainable. People are not going to pay $15 or $20 for a pizza.”

David Cohn owns 15 restaurants in San Diego and put in the surcharge, saying, “We want people to understand there is a cost. How do we stay in business with margins shrinking and competition increasing?”

Ask Bill Clinton. After all, he was the economic “expert” in 2014 when was pushing for a national minimum-wage increase:

I think we ought to raise the minimum wage because it doesn’t just raise wages for the three or four million people who are directly affected by it, it bumps the wage structure everywhere…. The estimates are that 35 million Americans would get a pay raise if the federal minimum wage was raised…. If you [raise the minimum wage] in a phased way, it always creates jobs. Why? Because people who make the minimum wage or near it are struggling to get by, they spend every penny they make, they turn it over in the economy, they create jobs, they create opportunity, and they take better care of their children. It’s just the right thing to do, but it’s also very good economics.

It’s very bad economics, but an increasing number of people are buying the fallacy. Since 2014, 27 states have implemented minimum-wage increases, 20 of them in 2017 alone. Most of those states raised them through ballot measures (Alaska, Arizona, Arkansas, California, Colorado, Florida, Maine, Missouri, Montana, Nevada, New Jersey, Ohio, Oregon, South Dakota, Washington, and the District of Columbia), while legislatures decided this was a good idea in Connecticut, Hawaii, Maryland, Massachusetts, Michigan, New York, and Vermont.

Ed Rensi was the CEO of McDonald’s for 16 years and has strong opinions about the impact a national minimum-wage increases is likely to have:

I guarantee you if a $15 minimum wage goes across the country you’re going to see a job loss like you can’t believe. It’s cheaper to buy a $35,000 robot that it is to hire an employee who’s inefficient making $15 an hour bagging French fries.

It’s already happening. Late last year McDonald’s announced that every one of its 14,000 stores nationwide will be replacing cashiers with automated touch-screen kiosks, starting with its stores where high-minimum wage laws were already in place: Florida, New York, San Francisco, Boston, Chicago, Washington, D.C., and Seattle.

As small business owners grapple with increased labor costs, the outcomes are predictable. Proponents claim that increased minimum-wage laws will increase the standard of living of workers, reduce poverty levels, and boost the economy as this “new” money circulates through the economy. The reality is that rising minimum-wage laws increase unemployment and poverty and make it even more difficult for small business owners to remain profitable. Those owners won’t be hiring new people but instead will ask more from their existing employees. They will be asking their workers to extend their hours, take a cut in benefits, or else be faced with the need to terminate them altogether.

This is the price of economic ignorance, which is bringing back the fundamental economic law: “There ain’t no such thing as a free lunch!” When it comes to increases in labor costs mandated by governments, it’s the customer who pays, the very people minimum-wage laws are said to help.

Bill Clinton Boston Economy impact Jobs Minimum Wage profit reality Small Business Unemployment wage
This entry was posted on Tuesday, March 14th, 2017 at 5:36 am and is filed under Free Market, Politics. You can follow any responses to this entry through the RSS 2.0 feed. Both comments and pings are currently closed.
Many of the articles on Light from the Right first appeared on either The New American or the McAlvany Intelligence Advisor.