This article appeared online at TheNewAmerican.com on Wednesday, March 1, 2017: 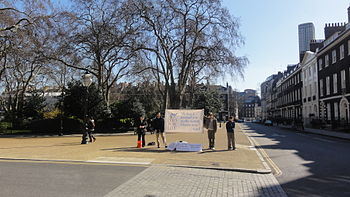 Four people from the ’40 Days for Life’ campaign protesting outside the Bedford Square offices of the British Pregnancy Advisory Service (BPAS), a provider of abortion services.

More than two dozen pro-life supporters gathered on Tuesday night in front of a Planned Parenthood facility in Washington, D.C., to pray, kicking off a 40-day prayer vigil across the land. Now in its 13th year, 40 Days for Life has similar teams in 340 locations in 40 different countries this year.

Katie Yoder, heading up the team, said the mere presence of believers saves lives: “It might be something as subtle as a car driving up to the clinic, and then slowing down and going past, [with] nobody ever walking into the clinic. Or it might be a couple walking in and out, and you don’t really know if they decided to go through with an abortion or not. But [our] presence does make a difference.”

This place is the gas chamber of our time. We need to have a physical presence here. It’s not enough that we’re pro-life in the work that we do or how we speak to friends and family. That we’re present here makes a difference.

40 Days for Life began following a 90-minute prayer session by four individuals in Bryan-College Station, Texas, in 2004. One of those attending, David Bereit, decided to help expand the session. Over the next two-and-a-half years, the vigil was replicated in six other cities. By 2010, those prayer vigils occurred in 238 locations around the world, from the United States to Australia, England, Northern Ireland, and Denmark.

Following the 2013 campaign, the group said that more than 100,000 people from more than 3,600 churches participated, in 253 locations across 10 countries. It said that they were aware of almost 12,000 lives being saved as a result of its efforts, with workers at Planned Parenthood facilities quitting their jobs, and 73 clinics being closed.

In 2014, Bereit wrote 40 Days for Life: Discover What God Has Done … Imagine What He Can Do, summarizing 40 incidents where lives were saved thanks to the efforts of the group. This year supporters in 340 cities around the world will be participating, tying the vigil to Ash Wednesday, the start of the season of Lent, leading up to Easter.

Supporters are encouraged by then-candidate Donald Trump’s explicit promise of defunding Planned Parenthood if he were elected president back in September. In his letter inviting people to join his Pro-Life Coalition, Trump said “I am committed to

Defunding Planned Parenthood as long as they continue to perform abortions, and reallocating their funding to community health centers that provide comprehensive health care for women; and

Making the Hyde Amendment permanent law to protect taxpayers from having to pay for abortions.

They are further encouraged, now that he is president, that Trump is starting to fulfill some of those promises. On January 24, he signed an executive order barring federal funds from being used to support organizations around the world that promote abortion, including funds going to the International Planned Parenthood Federation.

And this is only the beginning, according to Melanie Israel of the Heritage Foundation: “[Trump’s] administration will have more opportunities to pursue pro-life policies in the weeks and months to come, such as ending taxpayer funding for the abortion industry.”

Much like The John Birch Society, groups such as 40 Days for Life are increasingly successful in moving believers in life and freedom off their couches and into action campaigns, including influencing legislators and bringing the pro-life issue to the attention not only of those entering abortion clinics such as Planned Parenthood but to the general public as well. Starting in 2004 with just four praying individuals, 40 Days for Life has grown to more than 100,000 keeping faith. The Society, starting with just a dozen liberty-minded people in 1958, likewise has educated and then galvanized many hundreds of thousands to get involved in the freedom fight. There’s much work to be done and groups such as 40 Days for Life and the Society are doing it.

Abortion courage Donald Trump Executive Order faith John Birch Society Liberty Planned Parenthood
This entry was posted on Thursday, March 2nd, 2017 at 6:17 am and is filed under Education, Religion. You can follow any responses to this entry through the RSS 2.0 feed. Both comments and pings are currently closed.
Many of the articles on Light from the Right first appeared on either The New American or the McAlvany Intelligence Advisor.