Americans Eating Out Less Thanks to Higher Prices

This article appeared online at TheNewAmerican.com on Friday, February 24, 2017: 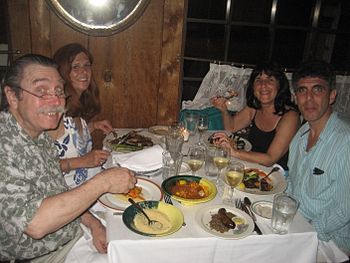 A Reuters/Ipsos survey released on Tuesday revealed that one-third of U.S. adults are eating out less frequently than they were just three months ago. Two-thirds of those staying home said it was because of higher restaurant prices. This news comes on top of reports that restaurant traffic was flat for all of 2016. In fact, the industry as a whole has gained just one percent in traffic since 2009.

Apologists for the industry offered all manner of explanations: higher costs of eating out due to minimum-wage laws forcing establishments to raise their menu prices; lower grocery prices for meats, poultry, fish, and eggs making eating at home more attractive and less expensive; competition from other full-service restaurants, fast food, delivery and take-out shops, concession stands, buffets, cafeterias, on-line delivery services (think Dominos), vending machines, and mobile venders. There’s competition from new “meal kit” companies such as Blue Apron, which started in August 2012 and by September 2016 was delivering eight million pre-portioned meals every month to its customers. And then there are big-box grocery stores offering inside fast-food offerings along with seating areas, turning them into “grocerants.”

Little is being said about the possibility that the decline is a harbinger of a decline in the overall economy. The first such suggestion came from financial services company Stifel Financial back on July 26: “Today, we adopt a Bearish outlook for Restaurants as we confidently believe that, at a minimum, the simultaneous deceleration of Restaurant industry comps across all categories … within our most recent [survey] … reflects the start of a U.S. Restaurant Recession…. If history is a guide, we warn investors that restaurant industry sales tend to be the “Canary that Lays the Recessionary Egg.”

A month later, second quarter sales for 2016 were disappointing for many of the industry’s major chains, including Burger King, Chipotle, McDonald’s, Shake Shack, Wendy’s, and Zoe’s Kitchen. And that news came on top of an announcement from Ruby Tuesday that it was closing 95 of its restaurants.

Then, in December, Restaurant Finance Monitor reported that same store sales in November shrank by 1.3 percent, marking nine straight monthly declines. This was a result of a decline in foot traffic, which fell 3.3 percent in November after falling 3.4 percent a month earlier. Quick-service restaurants — QSRs, which account for 80 percent of all food-service visits — dipped in November for the first time in five years.

When this information is considered in conjunction with the fact that housing prices have increased by double digits across the country, the median Consumer Price Index (CPI) rose in January by 0.3 percent (3.7 percent on an annualized basis), and the history that recessions generally occur approximately every four to six years, the stage may be set for another recession. Stifel called the decline in restaurant sales and traffic a “Canary that lays the Recessionary Egg,” a mixed metaphor that just might be right. As economist Gary North expressed, “The decline in people’s willingness to go out to eat looks to me like a pin aimed at these bubbles.”

bubble Consumer Price Index Economy Establishment Recession wage
This entry was posted on Saturday, February 25th, 2017 at 6:56 am and is filed under Economics, History. You can follow any responses to this entry through the RSS 2.0 feed. Both comments and pings are currently closed.
Many of the articles on Light from the Right first appeared on either The New American or the McAlvany Intelligence Advisor.