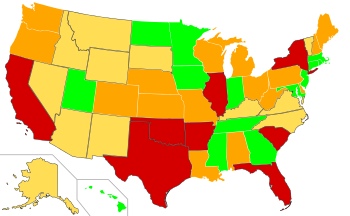 Residents of New Hampshire are enjoying a long-awaited expansion of their Second Amendment rights with the signing into law on Wednesday of a bill allowing them to carry a firearm without first obtaining government permission. The third time “is a charm,” it is said, and this bill passed on the third attempt. The previous two attempts passed both state houses but were vetoed by previous Democrat governors.

SB12 ensures New Hampshire citizens are guaranteed the fundamental right to carry a firearm in defense of themselves and their families, as prescribed by Article 2a of our state constitution. This common sense legislation aligns our concealed carry laws with that of our neighboring states of Vermont and Maine and states across the country.

This is about safety. This is about making sure that the laws on our books are keeping people safe while remaining true to the Live Free or Die spirit that makes New Hampshire the great state that it is. This is a commitment I made to the people of New Hampshire and I am proud today to fulfill that commitment, signing SB12 into law.

Republican Party Chairman Jeanie Forrester added, “This new law secures our constitutional rights, catches us up with our neighbor states and makes it easier for people to defend their lives and property.”

New Hampshire has allowed “open carry,” but required anyone carrying a firearm concealed to apply for a permit to do so. It needed to be renewed every four years, and was issued by law enforcement officials only if they deemed it to be “suitable” to do so. Now, New Hampshire joins Alaska, Arizona, Idaho, Kansas, Maine, Mississippi, Missouri, Montana, Vermont, West Virginia, and Wyoming in allowing their citizens to carry unrestricted.

Right behind New Hampshire are Texas, Kentucky, Utah, and North Dakota, all of which have similar legislation pending.

Constitutional carry, also referred to as “permitless carry,” “Vermont carry,” or “unrestricted carry,” is the legal carrying of a handgun, either openly or concealed, without the requirement of a government permit. To purists it implies that the only permit required is that provided by the Second Amendment to the Constitution.

With 12 states now allowing unrestricted carry, and another four about to follow them, the carrying of a firearm is becoming increasingly commonplace. This bodes well for public safety, as well as for personal protection, as those bent on harming others must assume that potential victims are prepared to defend themselves with a firearm, whether they carry one or not. When “gun free” zones are finally eliminated, then citizens on campuses, in schools, businesses, malls, and government buildings will enjoy that additional benefit as well.

common sense Concealed Carry Constitution defense Democrat Kansas legislation North Dakota Republican rights Second Amendment Texas
This entry was posted on Friday, February 24th, 2017 at 6:33 am and is filed under Politics, Second Amendment. You can follow any responses to this entry through the RSS 2.0 feed. Both comments and pings are currently closed.
Many of the articles on Light from the Right first appeared on either The New American or the McAlvany Intelligence Advisor.