This article appeared online at TheNewAmerican.com on Tuesday, February 21, 2017: 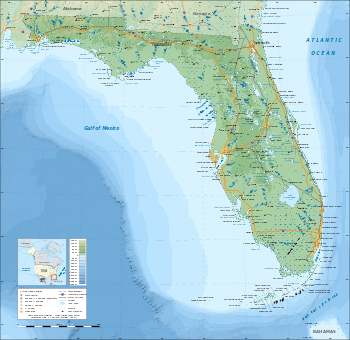 Topographic map of the State of Florida,

With about two dozen gun-related bills being filed ahead of next month’s 60-day legislative session scheduled to begin in Florida, the state continues to earn its nickname “The Gunshine State.” Most people would likely anticipate that those bills contain restrictions on gun ownership in light of the Pulse nightclub massacre in Orlando last June, the deadliest mass shooting in U.S. history. Instead, most of them promote increased gun freedom, with many likely to pass the Republican-controlled legislature and then move on to Republican Governor Rick Scott’s desk for signing.

Bills filed by Republicans would

On the other hand, bills filed by the outnumbered Democrats would

Legislators are acting because of grassroots pressure, and the driving force for the past 30-odd years behind the grassroots education effort has been led by Marion Hammer, a 4-foot-11 dynamo who has created the groundswell of support for the Second Amendment almost singlehandedly. Working as a lobbyist for the National Rifle Association (NRA) since the late 1970s, she focused the attention of gun owners on changing the state’s concealed carry permitting process from “may issue” to “shall issue.” Today one in every 14 Floridians has a concealed carry permit.

She built and then rallied grassroots support for the state’s “stand your ground” law, that has become a model for the majority of the states that have adopted such a law.

She claims that she is an educator and not a persuader:

I’ve never considered myself a persuader. I view myself more as an educator. When I educate with facts and common sense and reason, then [opponents] are going to be with us.

Education and knowing the truth [are] a powerful thing.

And she is persistent almost to the point of being annoying. If a bill is presented, and it fails to pass despite her efforts and those of her supporters, it’s presented again in the next session. Said Hammer:

Our goal is to restore the Second Amendment to the full intent of the Founding Fathers and to protect freedom at all costs.

As long as there are people who want to deny your rights, somebody is going to have to be out there fighting to protect them.

The parallels to the educational efforts of The John Birch Society are uncanny. First comes education, followed by action. The society has enlisted hundreds of thousands of concerned Americans over the years who’ve learned that “you can’t fight something with nothing.” The society focuses on those few issues that have a fighting chance of being successful, which explains the society’s success despite its relatively small numbers.

David Cole, a law professor at Georgetown University Law Center, explained why Hammer (and, indirectly, The John Birch Society) has been successful:

[This] recognition of an individual right to bear arms was not imposed from the top down by five [Supreme Court] justices, but developed from the bottom up, through decades of advocacy….

The story is not unique to the NRA and the Second Amendment. Often, the key actors … are “we the people”, acting in associations of like-minded citizens, and engaged in advocacy far beyond the federal courts.

As William Norman Grigg noted in his 2001 book, Global Gun Grab, “The JBS devotes its efforts to the strategy employed by the Founding Fathers in the decades leading up to American independence: educating the citizenry in sound principles of government; warning the public about the existence of an organized, covert threat to our liberties and free institutions; and mobilizing patriots in an organized, principle–centered effort to defeat the enemies of freedom.”

Using these same principles, NRA warrior Marion Hammer and her host of supporters has turned Florida, the Sunshine State, into the Gunshine state. The current bevy of bills being offered to the state’s legislature supporting the Second Amendment is simply the result of that strategy.

Concealed Carry Constitution Education Freedom guns John Birch Society justice law Liberty National Rifle Association power rights Second Amendment truth weapons
This entry was posted on Wednesday, February 22nd, 2017 at 6:59 am and is filed under Politics, Second Amendment. You can follow any responses to this entry through the RSS 2.0 feed. Both comments and pings are currently closed.
Many of the articles on Light from the Right first appeared on either The New American or the McAlvany Intelligence Advisor.