This article appeared online at TheNewAmerican.com on Friday, February 17, 2017: 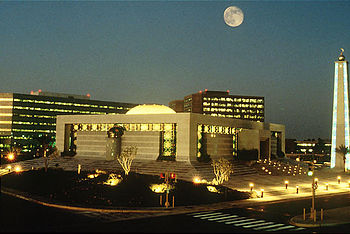 Under Saudi Arabia’s “National Transformation Program” (NTP), being pushed by Deputy Crown Prince Mohammed bin Salman, the sale of up to five percent of the country’s crown jewel, Saudi Aramco (officially the Saudi Arabian Oil Company), would boost private employment and diversify the kingdom away from oil. The initial public offering (IPO), if and when it happens, would be the largest IPO in history and value Aramco at around $2 trillion, making it the largest publicly traded energy company in the world.

The funds raised would flow into a “sovereign wealth fund,” which would then invest in foreign and national companies in the private sector. This, it is hoped, would entice others to join in turning Saudi Arabia into more of a capitalist economy rather than a state-controlled one.

In Salman’s grand scheme, Aramco’s IPO would be the first of several planned to make his country look and feel more like Western democracies, with public disclosures and full transparency necessary to entice investors to take a minority interest in other state-owned properties in addition to Aramco.

The problems facing Salman are daunting. Aramco has been treated by the royal family as its private piggy bank for decades, as well as funding the kingdom’s cradle-to-grave welfare for its citizens. Aramco builds schools, hospitals, and sports stadiums, and sells its natural gas to the government-owned utilities well below its costs. It funds the royal family’s incursions into Yemen and other military adventures. Unwinding the tangle of interests, demands, and commitments to make Aramco acceptable to foreign investors is a gargantuan undertaking. Admitting as much is Khalid al-Falih, the new Saudi energy minister: “Extensive rewiring of our financials and the relationship [of Aramco] with the government … would require a significant amount of time.”

It’s also counter to Saudi Arabia’s penchant for secrecy over its oil and gas reserves and just what the company’s lifting costs and therefore its profitability actually are. In order to make attractive those shares of a minority interest in what is now a 100-percent state-owned-and-operated company, those and other disclosures will be required. Investors will also demand significant assurances that the new public company won’t continue to be treated as it currently is. Falih didn’t help any with his comment that the government will continue to make “sovereign decisions” regarding the company’s production and investments: “[Investors] are going to have to accept it. It is part of the package.”

The royals are facing other problems as well. Their decision in late 2014 to flood the international crude-oil market in the hopes lower prices would drive many American oil producers out of business failed. They reversed their position with the decision by OPEC in November to curtail production, hoping that the price of crude would move significantly higher. Higher oil prices would not only enhance the value of Aramco but also reduce the annual deficits currently being run by nearly all of OPEC’s members, including the Saudis. Their deficit last year approached $100 billion, forcing them for the first time to borrow from international banks to fund its budget shortfall. But that, so far, has failed as well.

The delay in coming to market for minority shares of its oil company has the odor of desperation on the part of the royal family. Its plan to “internationalize” itself, to become a financial center through its Saudi Tadawul stock exchange; to enhance its credibility, visibility, and influence worldwide; and to turn more of its economy over to private interests (and shift some of the costs of its welfare state onto them) appears to be close to unwinding. Unless oil prices move significantly higher (thus enhancing the value of that minority interest), the crown prince’s grand plan could be put off indefinitely.

credibility Economy Energy Oil Prices OPEC Private Sector welfare
This entry was posted on Saturday, February 18th, 2017 at 6:40 am and is filed under Economics, Energy. You can follow any responses to this entry through the RSS 2.0 feed. Both comments and pings are currently closed.
Many of the articles on Light from the Right first appeared on either The New American or the McAlvany Intelligence Advisor.