This article appeared online at TheNewAmerican.com on Friday, February 10, 2017: 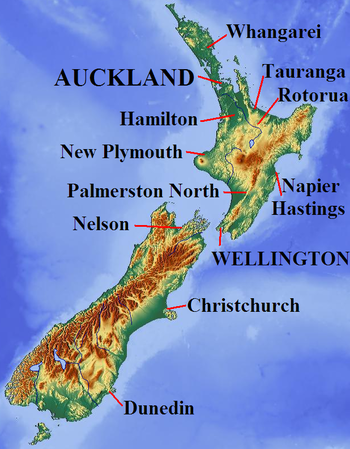 In the 48 hours following the surprise election of underdog Donald Trump in November, New Zealand websites saw a 2,500-percent increase in traffic. The New Zealand Immigration website, for example, received 88,353 visits from U.S. citizens during those 48 hours, up from 2,300 visits a day. The investor-focused New Zealand Now website received 101,000 daily hits from the United States, compared to the usual 1,500. Almost 18,000 Americans registered an interest in studying, working, or investing in New Zealand during the month of November, up from just 1,272 in November 2015. And 13,401 U.S. citizens registered with New Zealand’s immigration authorities (the first official step toward seeking permanent residency), more than 17 times the usual rate.

But the influx of the world’s elite into New Zealand began well before Trump’s victory. In the first 10 months of 2016, foreigners bought nearly 1,400 square miles of land in New Zealand, four times what they bought the year before. And in the last six years, nearly 1,000 foreigners have acquired residency there under programs that require them to make investments locally of at least a million dollars.

If a starting date for the ultra-wealthy’s concern can be set, it might be National Geographic channel’s “Doomsday Preppers” television show launched in 2012. The premiere drew more than four million viewers and, by the end of the first season, was the most popular show in the channel’s history.

A spokesman for the world’s über-wealthy, Robert Johnson, president of the Institute for New Economic Thinking, told attendees at the World Economic Forum in Davos, Switzerland, that “hedge-fund managers all over the world … are buying airstrips and farms in places like New Zealand because they think they need a getaway.”

One of those ahead of the curve is PayPal co-founder Peter Thiel, a supporter of Donald Trump and a major donor to his election campaign. He became a joint U.S.-New Zealand citizen in 2011 and then invested $10 million in buying up 477 acres of pristine land on the South Island. When asked why, Thiel mentioned several things: It’s nice to have a getaway from the busy world of commerce, it’s far away from the San Andreas fault, New Zealand’s political climate is relatively benign compared to the United States, an EMP (electro magnetic pulse) isn’t likely on an island thousands of miles away from major population centers in Europe and the United States, saber-rattling by Russia and the Middle East are far-distant concerns, and so forth.

Steve Huffman, the founder and CEO of Reddit, said he isn’t so much concerned about a “doomsday” triggering event itself, but the aftermath. That’s one of the reasons he decided to have laser surgery on his eyes: “If the world ends — and not even if the world ends, but if we have trouble — getting contacts or glasses is going to be a huge pain. Without them, I’m [in trouble].” His preparations include “a couple of motorcycles … a bunch of guns and ammo … [and] food. I figure that, with that, I can hole up in my house for some amount of time.”

Antonio Garcia Martinez, author of the controversial Chaos Monkeys about the dark side of Silicon Valley, has gone a step farther than Huffman. He bought five wooded acres on an island in the Pacific Northwest and brought in generators, solar panels, and thousands of rounds of ammunition, claiming that “You just need so many things to actually ride out the apocalypse.” He added: “I think people who are particularly attuned to the levers by which society actually works understand that we are skating on really thin cultural ice right now.”

When asked about his prepping plans, Tim Chang, the managing director of venture capital firm Mayfield Fund, responded openly: “There’s a bunch of us in [Silicon] Valley. We meet up and have these financial-hacking dinners and talk about backup plans people are doing. It runs the gamut from … stocking up on Bitcoin … to figuring out how to get second passports … to having vacation homes in other countries. I’ll be candid: I’m stockpiling … real estate to generate passive income but also to have havens to go to. I have this kind of terror scenario: ‘O my God, if there is a civil war or a giant earthquake that cleaves off part of California, we want to be ready.'”

For many it’s not fear of a doomsday event so much as common sense. Yishan Wong, who was CEO of Reddit from 2012 to 2014, told Evan Osnos, the writer of “Doomsday Prep for the Super-Rich” for The New Yorker: “Most people do not necessarily think a collapse is likely. They consider it a remote event, but one with a very severe downside. So, given how much money they have, spending a fraction of [it] to hedge against this … is a logical thing to do.”

Osnos interviewed the CEO of another large tech company who echoed Wong: “I actually think [prepping] is logically rational and appropriately conservative…. Our food supply is dependent upon G.P.S., logistics and weather forecasting, and those systems are generally dependent on the Internet, and the Internet is dependent on [the domain name server]. Go risk factor by risk factor, acknowledging that there are many you don’t even know about, and you ask, ‘What’s the chance of this breaking in the next decade?’ Or invert it [and ask] ‘What’s the chance that nothing breaks…?’”

Options for the elites seeking shelter from the coming difficulties continue to expand. There’s the 37,000-acre Resort at Paws Up in Greenough, Montana, not far from Missoula. It offers “glamping” — a portmanteau of “glamour” and “camping” — where guests can “rough it” in luxury. For instance, there are no overhead lights, so guests must get used to the dark. The high-end tents don’t have WiFi either, so that guests can get used to going without that as well. The resort has a shooting range set up in a ghost town setting which includes archery, shooting 3D animal targets, and tomahawk throwing.

The resort has a 25,000-square-foot shopping center, Wilderness Outpost, featuring custom-made knives for hunting, cooking, building shelters from tree branches, and self-defense, along with work gloves, designer casual clothing and boots, and other products for the high-maintenance elites.

It includes a workshop that teaches edible plant identification, fly-fishing in the nearby Blackfoot River, and foraging in the Flathead National Forest. There’s even the Grizzlyman Fitness Trail, a one-mile-long forest obstacle course featuring a ropes course, ladders, monkeybars, and single-file bridges.

For those members of the ruling class seeking more protection closer to home, there’s the Survival Condo Project started in 2008 by Larry Hall. He bought an empty Atlas missile silo near Wichita, Kansas, for $300,000, refurbished it for another $10 million, and sold out the project shortly after it came on the market. Writes Hall: “The fact is, you can find other solutions for ‘survival living.’ Though none of the options today offer the peace of mind that comes with our state-of-the-art technologies, combined with the comfort and luxury that is offered through our Survival Condo opportunity. Nothing even comes close.”

The 200-foot deep apartment complex comes with redundant electric sources and water supplies with 75,000-gallon reserve tanks. It’s equipped with air-filtration systems to protect against nuclear, biological, and chemical attacks. The complex grows its own food underground using hydroponics. A full unit (1,820 square feet) was priced at $3 million, a half-unit (900 square feet) was offered for $1.5 million, while prices for the Survival Condo Penthouse units (3,600 square feet) started at $4.5 million. It features blast doors that protect against nuclear attacks and 500 mph winds. Hall is building another one three times as large, in face of increasing demand. That one will have a bowling alley.

About the only thing left out of the equation is the collapse of the division of labor in the event of such a catastrophe, man-made or not. William Fortschen’s first novel One Second After, published in 2011, covered that in detail. He followed it up with a sequel, One Year After, in 2016. Fortschen’s foresight completes what the elites have started: How does one survive if the division of labor in an advanced economy collapses? Some of the options being offered the elites, such as the Survival Condo Project, guarantee safe and protected living for up to five years.

But what happens after that?

How much better would it be for these whose purchasing power seems to have exceeded their common sense to invest in programs and strategies designed to restore civilization to its former foundations? That way they wouldn’t need to worry their hearts about how to avoid a coming collapse.

ammunition attacks common sense division of labor Elite guns immigration Internet power Real Estate
This entry was posted on Saturday, February 11th, 2017 at 6:49 am and is filed under Economics, Politics. You can follow any responses to this entry through the RSS 2.0 feed. Both comments and pings are currently closed.
Many of the articles on Light from the Right first appeared on either The New American or the McAlvany Intelligence Advisor.