Dakota Access Protesters Pollute the Environment They Claim to Cherish

This article appeared online at TheNewAmerican.com on Monday, February 5, 2017: 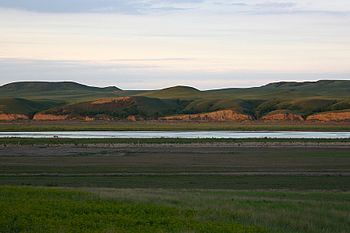 The U.S. Army Corps of Engineers announced last Friday that the site that protesters have occupied near the Dakota Access pipeline will be closed on February 22 to “prevent injuries and significant environmental damage in the likely event of flooding in this area. Without proper remediation, debris, trash and untreated waste will wash into the Cannonball River and Lake Oahe.”

The cleanup started a week ago, involving volunteers from one of the activist groups responsible for the mess, the Thunder Valley Community Development Corporation, along with officials from nearby Cannonball. So much trash has accumulated since the first protesters arrived last August that front-end loaders, dump trucks, and skid-steer loaders were brought in to remove it. Thunder Valley’s executive director estimated that “we’ll be here eight to 10 hours a day, all week.”

The governor of North Dakota, Doug Burgum, warned that “it is paramount for public safety, and to prevent an environmental disaster, that the camps be cleared prior to a potential spring flood,” adding that the cleanup is “an important step toward addressing the safety and environmental risks posed by imminent flooding.”

The governor failed to note that so much trash and human waste had accumulated that the cleanup is expected to take weeks. Once the debris has been cleared, an environmental cleanup will follow. Even Dave Archambault, tribal chairman for the Standing Rock Sioux and a leader in the protest movement, was astonished at just how much trash, garbage, rotting food, tents, teepees, sleeping bags, blankets, canned goods (open and sealed), food, equipment, human excrement, and even dozens of automobiles had been left behind: “There’s more than anticipated, and it’s under a lot of snow. I wouldn’t say it’s going to get done in days; it’s going to take weeks.”

Most of the cost will be borne by the tribe, which has received an estimated $6 million in donations from those supporting the protesters. The balance will be provided by volunteers from nearby Cannonball, and local health and environmental agencies supported by local taxpayers. So far the tribe hasn’t asked the state for any financial assistance.

The mounds of trash left behind by the protesters are in danger of polluting the very environment they said they cherished. Scott Davis, North Dakota’s commissioner for Indian Affairs, obliquely noted the hypocrisy: “It’s unfortunate,” he said. “That just goes against what they’re fighting against … leaving that stuff and abandoning it … obviously [endangering] the environment and the river.”

Adding to the staggering hypocrisy, the few hundred remaining of the estimated 10,000 protesters who came and went during the protests resisted the cleanup, blocking Highway 1806 leading into and out of the protest area and preventing the dump trucks from entering or exiting. Morton County emergency manager Tom Doering somehow hid his frustration when he closed the highway until the protesters could be removed: “It just wasn’t safe, given that they had blocked the road. It was doubtful that they were going to let the trucks in, and then the operation pretty much took all day to evict the protesters.” Seventy-six of them were arrested.

The camp is close to where the Cannonball River flows into the Missouri River, which is a water source for millions of people downstream, including the Sioux Indian tribe. Thousands have camped there since August to protest a pipeline that they worry will threaten drinking water and Native American burial sites.

danger Environment health Hypocrisy media North Dakota risks
This entry was posted on Tuesday, February 7th, 2017 at 6:18 am and is filed under Politics. You can follow any responses to this entry through the RSS 2.0 feed. Both comments and pings are currently closed.
Many of the articles on Light from the Right first appeared on either The New American or the McAlvany Intelligence Advisor.