Trump, Nieto Agree to Dial Down Rhetoric Over Border Wall 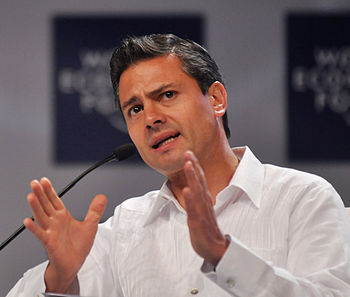 The flurry of tweets following President Trump’s signing of the Border Security and Immigration Enforcement Improvements executive order last Wednesday resulted in the Washington Post describing “a deep rift” between the United States and Mexico, and Mexico’s former Foreign Minister Jorge Castañeda labeling the situation a “crisis” that is “going to last a long time.” On Thursday, Mexican President Enrique Peña Nieto (shown) canceled a face-to-face meeting he was to have with President Trump this Tuesday after Trump suggested it would be better to cancel the meeting if Mexico refused to pay for the border wall Trump promised to build.

The tempest died down immediately after President Trump and Mexican President Peña Nieto had a nice long chat by phone on Friday. Following that call — originally scheduled to for 10 minutes but lasting more than an hour — the White House said it would reschedule “in the near future” a face-to-face meeting between the two.

Following that phone conversation, a joint statement was issued stating that future negotiations — about the wall, who is going to pay for it, and other concerns about drug and arms trafficking across the southern border — would be private. A White House official said: “The attitude was, ‘Let’s figure out how to get it done. You know my [Trump’s] position on this.’ It doesn’t help to negotiate this in public.” The Mexican government assented: “The presidents agreed for now not to talk publicly about this controversial issue.”

The spark that lit the tinder was the executive order mandating that U.S. federal agencies start construction of the wall along America’s southern border. It was necessary not only to fulfill one of President Trump’s primary campaign promises, but also, noted the order, because “Aliens who illegally enter the United States without inspection or admission present a significant threat to national security and public safety.”

The order called it a “clear and present danger” (referring to the rationale used by the Supreme Court in 1919 in its unanimous decision in Schenck v. United States): “Among those who illegally enter are those who seek to harm Americans through acts of terror or criminal conduct. Continued illegal immigration presents a clear and present danger to the interests of the United States…. It is the policy of the executive branch to … secure the southern border of the Unites States through the immediate construction of a physical wall on the southern border.”

Trump tweeted early Thursday morning: “The U.S. has a $60 billion trade deficit with Mexico. It has been a one-sided deal from the beginning of NAFTA with massive numbers … of jobs and companies lost. If Mexico is unwilling to pay for the badly needed wall, then it would be better to cancel the upcoming meeting.”

Mexican President Nieto tweeted back: “We have informed the White House that I will not attend the working meeting planned for next Tuesday with @POTUS. Mexico reiterates its willingness to work with the United States to reach agreements that favor both nations.”

Concerns about a trade deficit are overrated. The analogy of a shopper spending $100 at Walmart is useful. When he leaves the store, he has just created a trade deficit of $100. The store has his $100 while the customer has the goods. Economists call this a “deficit.” The fact that both Walmart and the customer are better off is irrelevant to them.

There are other far more important issues to be resolved between Mexican President Nieto and Trump: maintaining friendly relations with the two nations bordering each other; cooperating on halting the flood of criminal aliens, terrorists, and armaments across the border into the United States; and protecting the flow of investment capital between the two countries (including the $26 billion of “remittances” that Mexicans living in the United States send to their families back home every year).

That’s why it’s important to ignore the Armageddon warnings from the Washington Post and others, and concentrate instead on what transpired during that hour-long conversation on Friday between the two top officials. During the joint news conference on Friday with British Prime Minister Theresa May, Trump said his phone call with Nieto was “very, very friendly,” adding, “I think we have a very good relationship, the president and I … We are going to be working on a fair relationship and a good relationship.”

After all, added a White House official: “A 10-minute call doesn’t become an hour-long call if it’s not going well.”

Executive Order Illegal Immigration immigration media private Spending Surplus terrorists threat Twitter
This entry was posted on Monday, January 30th, 2017 at 5:45 pm and is filed under Economics, Politics. You can follow any responses to this entry through the RSS 2.0 feed. Both comments and pings are currently closed.
Many of the articles on Light from the Right first appeared on either The New American or the McAlvany Intelligence Advisor.