Court Rules That Those Carrying Concealed Are Presumed to Be Dangerous

This article appeared online at TheNewAmerican.com on Monday, January 30, 2017: 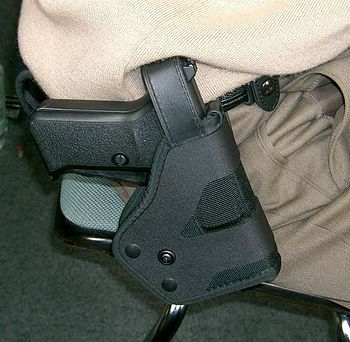 The U.S. Court of Appeals for the Fourth Circuit (Maryland, North Carolina, South Carolina, Virginia, and West Virginia) ruled last week that an individual carrying concealed gives up essential Fourth Amendment rights under the presumption that since he is armed, he is also dangerous.

The ruling issued on Monday, January 23, United States v. Robinson, reversed an earlier decision by the court’s three-judge panel, claiming that the Supreme Court, in two relevant decisions, concluded that “armed and dangerous” meant “armed and therefore dangerous” rather than “armed” as a fact and “dangerous” based on reasonable judgments surrounding the case.

A tip received by Ransom, West Virginia, police on March 24, 2014 that a man was seen in a parking lot in an area well-known for drug-trafficking had just loaded a pistol and then put it into his pants pocket sent two police cruisers to the area. A lawful traffic stop ensued when officers noted that an individual matching the tipster’s description was riding as a passenger without his seatbelt fastened. When asked to step out of the car the passenger, Shaquille Montel Robinson, complied without resistance. When asked if he was armed Robinson didn’t answer but gave what the office described as a “weird look.” The officer took this to mean: “I don’t want to lie to you, but I’m not going to tell you anything [either].”

The officer then performed a “Terry frisk” and found a firearm in his pants pocket. The other officer on the scene then recognized Robinson as a convicted felon and arrested him for illegal possession of a firearm.

Robinson moved to have the evidence suppressed, claiming that the frisk violated his Fourth Amendment rights [to wit: “The right of the people to be secure in their persons, houses, papers, and effects, against unreasonable searches and seizures, shall not be infringed.”] as the two officers “had no articulable facts demonstrating that he was dangerous since, as far as the officers knew, the state [of Virginia] could have issued him a permit to carry a concealed firearm.”

Nor will we adopt a rule that would effectively eliminate Fourth Amendment protections for lawfully armed persons.

The Justice Department under the Obama administration demanded that the court reconsider the three-panel’s decision, and last week the full court reversed. The 58-page ruling is based upon a single, and fatal, assumption, as articulated early in the ruling: “We reject Robinson’s argument [and Harris’ ruling] and affirm, concluding that an officer who makes a lawful traffic stop and who has a reasonable suspicion that one of the automobile’s occupants is armed may frisk that individual for the officer’s protection and the safety of everyone on the scene.” It added confirmation that the mere existence of a firearm is enough to allow a Terry frisk:

The danger justifying a protective frisk arises from the combination of a forced police encounter and the presence of a weapon…. [Emphasis added.]

The court proceeded to dismantle Robinson’s claim that the mere presence of a firearm poses no danger to the arresting officers, especially since he could, under state law, have a permit to carry a firearm concealed. The court claimed that the “risk inherent in all traffic stops is heightened exponentially when the person who has been stopped is armed with a weapon that could unexpectedly and fatally be used against” the officer in a matter of seconds. Therefore, held the court, “when the officer reasonably suspects that the person he has stopped is armed, the officer is warranted in the belief that his safety … [is] in danger … thus justifying a Terry frisk.”

The court then leaned on two Supreme Court decisions — Pennsylvania v. Mimms and Terry v. Ohio — to justify its decision to find against Robinson:

Established Supreme Court law imposes two requirements for conducting a frisk, but no more than two: first, that the officer have conducted a lawful stop … and second, that during the valid but forced encounter, the officer reasonably suspects that the person is armed and therefore dangerous.

In both Terry and Mimms, the Court deliberately linked “armed” and “dangerous,” recognizing that the frisks in those cases were lawful because the stops were valid and the officer reasonably believed that the person stopped “was armed and thus dangerous.”

The use of “and thus” recognizes that the risk of danger is created simply because the person … is armed.

To be clear the circuit court is ruling against the gun and not against any behavior on the part of Robinson. The mere presence of a gun, ruled the court, makes its owner not only “armed” but also “dangerous.”

Judge James Wynn added his assent to the court’s ruling but complained that it didn’t go far enough:

This case is not about traffic stops or “weapons” — it is about firearms and the danger they pose to law enforcement officers….

[The answer is] “yes” to both questions.

His diatribe against the mere presence of a firearm continued:

Confronting the inescapable reality that lawfully-stopped individuals armed with firearms are categorically dangerous reflects the heightened danger posed by firearms….

In sum, individuals who carry firearms — lawfully or unlawfully — pose a risk of danger to themselves, law enforcement officers, and the public at large.

Accordingly, law enforcement officers may frisk lawfully stopped individuals who the officers reasonably suspect are carrying a firearm because a detainee’s possession of a firearm poses a categorical “danger” to the officers.

Judge Wynn then expounds further on the impact this ruling has on those carrying lawfully:

The majority decision today necessarily leads to the conclusion that individuals who elect to carry firearms forego other constitutional rights, like the Fourth Amendment right to have law enforcement officers “knock-and-announce” before forcibly entering homes….

It is difficult to escape the conclusion that individuals who choose to carry firearms necessary face greater restriction on the concurrent exercise of other constitutional rights, like those protected by the First Amendment.

It’s no wonder then that the National Rifle Association (NRA) says this ruling by the Fourth Circuit “may be the most anti-gun ruling from any court in the modern era.”

So does Judge Harris, who wrote the majority opinion for the original decision by the three-judge panel but strongly dissented from the court’s reversal:

Today’s decision … undoubtedly will have implications for police use of force.… If a police officer reasonably believes that a suspect poses a “threat of serious physical harm” [merely by lawfully possessing a firearm], he may use deadly force to protect himself.

The court’s decision is abominable because it signals out the possession of a possible deadly tool to lose one’s constitutionally protected rights, and that’s wrong. First, the Constitution protects both the Second and Fourth Amendments equally, and the Founders didn’t put in wording allowing one to preempt the other. It is, in fact, pure sophistry, the rationalizing of breaking of the Constitution. The police in this case did not pull over the man for suspected violence, but for a missing seatbelt, and there was no indication that the man would turn violent — hence no reasonable reason to frisk him. Also, if the mere possession of a potentially deadly weapon is cause to lose one’s constitutional rights, any time an American gets within swinging length of a policeman, the officer should then be able to overturn that person’s constitutional rights, as hands and feet are used hundreds of times a year to kill people.

If the Fourth Circuit Court’s decision isn’t challenged and overturned, not only will those carrying concealed become second-class citizens and lose their Second and Fourth Amendment rights, they could also, during a simple traffic stop, lose their lives.

Constitution danger firearms First Amendment Fourth Amendment justice law National Rifle Association Obama resistance rights Supreme Court violence weapons
This entry was posted on Monday, January 30th, 2017 at 5:36 pm and is filed under Fourth Amendment, Second Amendment. You can follow any responses to this entry through the RSS 2.0 feed. Both comments and pings are currently closed.
Many of the articles on Light from the Right first appeared on either The New American or the McAlvany Intelligence Advisor.