This article appeared online at TheNewAmerican.com on Thursday, January 26, 2017: 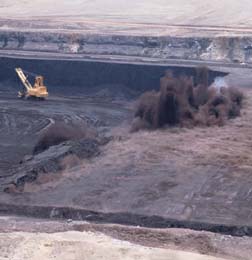 To facilitate mining of a coal seam in Gillette, Wyoming, blasting was used to loosen the coal after the overburden was removed. Approximately half a million tons of coal in a seam 80 feet thick was loosened by this single blast.

House Majority Leader Kevin McCarthy explained in an op-ed in the Wall Street Journal on Tuesday just how Congress is planning to roll back numerous egregious and harmful rules promulgated by the Obama administration: the Congressional Review Act (CRA). The CRA was included in the “Contract With America Advancement Act of 1996” and allows Congress to review, and to cancel by majority rule, new federal regulations issued by federal agencies. There’s a window of 60 “legislative” days to disapprove, which explains some of the Trump administration’s haste in pushing to repeal them. Once passed by both houses, repeals then become effective with President Donald Trump’s signature.

There are plenty of targets, but McCarthy focused on just three: the Interior Department’s Stream Protection Rule impacting the coal-mining industry, new methane gas regulations that would cost up to $1 billion and force many small energy developers out of business, and the Social Security Administration’s new rule that states that if a S.S. recipient needs a third party to manage his finances, he will be added to the gun background check list.

The CRA shouldn’t be necessary. If Congress hadn’t unconstitutionally allowed power it alone possesses under the Constitution to make laws to pass over to the executive branch’s various and sundry regulatory agencies, the problems with the Obama administration’s overreach wouldn’t exist in the first place. Those agencies have grown into Leviathan, issuing rules, regulations, and mandates far beyond those imagined by Congress. Now Congress is in the backward position of having to limit the regulations pouring out of that unconstitutional “fourth branch” of government. The child is now threatening its parent.

Parsing the language of the Interior Department’s rules on its expanded regulation of coal miners proves the point:

Under [the Surface Mining Control and Reclamation Act of 1977], the regulatory authority may not approve a permit application [from a coal mining company] unless the application demonstrates, and the regulatory authority finds, that the proposed operation would not result in material damage to the hydrologic balance [i.e., streams and rivers] outside the permit area.

How does a coal mining company, in its application, “prove” a negative? How does it satisfy a bureaucratic unelected unaccountable and invisible agency that it will cause no harm, or at least not enough harm to avoid trespassing on that agency’s environmental sensitivities? What assurance does a coal mining company have that said agency won’t change the rules arbitrarily and capriciously in the future? Would not such future uncertainty tend to dampen said coal company’s interest in developing its reserves?

Similar charges could be levied against the federal agency issuing its rules on methane emissions, but the best example of egregious overreach is the Social Security Administration’s new rule that allows it to “deem” who shall have his or her name entered into the National Instant Criminal Background Check System (NICS) based on whether or not they receive third-party assistance in managing their finances. Here’s what the SSA says it will do:

We will identify, on a prospective [in the absence of evidence of any proclivity towards criminal activity] basis, individuals who receive Disability Insurance benefits … or Supplemental Security Income (SSI) payments … who meet certain criteria, including … a finding that the individual’s mental impairment meets or medically equals [various] requirements.

And just how, pray tell, would such “identification” take place? The SSA responds:

And just how is that “issue of capability” to be determined? Again, the SSA provides the guidelines its bureaucrats should follow in making that determination:

If so, do you think this difficulty indicates [that] the beneficiary cannot manage or direct the management of [his or her] funds?

If the answer, by this nameless, faceless unaccountable bureaucrat, is yes, his or her name is entered into the NICS.

The agency then condescends to tell the soul who just had his Second and Fourth Amendment rights under the Constitution obliterated that they have just done so, and that if he cares to contest this arbitrary and capricious decision by said unnamed bureaucrat, he is free to hire an attorney and seek redress. Guilty until proven innocent.

Where is due process? Where is the beneficiary allowed to defend himself or explain himself or offer an explanation? What happens to the right to face his accuser in a court of law?

When Chris Cox, executive director of the National Rifle Association’s Institute for Legislation Action (NRAILA), learned of McCarthy’s plan of attack to repeal this particular rule, he was delighted:

Congress’ decision to review the Obama administration’s back-door gun grab is a significant step forward in restoring the fundamental Constitutional rights of many law-abiding gun owners.

The NRA has been fighting this unconstitutional government overreach since it was first discussed, and we look forward to swift congressional action to overturn it.

Those in the energy industry will likely be equally ebullient once Congress has righted the wrongs imposed by federal agencies on its businesses. Representative Greg Walden (R-Ore.), chair of the House Energy Committee, told Reuters that using the CRA will not only wipe out entire regulations but forbid them from writing new versions in their place.

In effect Congress’ use of the CRA will be equivalent to hacking off some of the branches of the Fourth Branch’s tree, but leaves the trunk and the root intact. It’s a start, but only a start.

bureaucrat Constitution Donald Trump Energy EPA Fourth Amendment legislation National Rifle Association power Regulations Regulatory Agencies Social Security
This entry was posted on Thursday, January 26th, 2017 at 8:47 pm and is filed under Energy, Politics. You can follow any responses to this entry through the RSS 2.0 feed. Both comments and pings are currently closed.
Many of the articles on Light from the Right first appeared on either The New American or the McAlvany Intelligence Advisor.