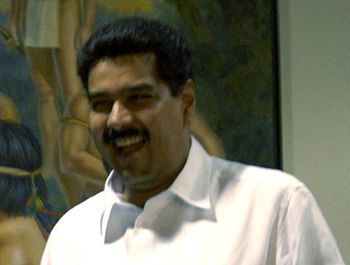 Venezuela’s Marxist dictator, Nicolas Maduro (shown), fired the head of his country’s central bank on Friday. Without fanfare or any public statement from either Maduro or his banker, Nelson Merentes, the firing is the latest move by the president to place the blame for the collapse of his country anywhere but where it belongs: on his socialist policies.

For months The New American has tracked the retrogression of a country which was once one of the leading economies in South America to a banana republic where people are starving, sick people are dying for lack of care, and a black market has replaced a once-thriving free economy. Last June, the New York Times was finally forced to admit the cause:

The threats Venezuelans face today are not the result of foreign or domestic conspiracies [as charged by Maduro], but Mr. Maduro’s disastrous leadership. On his watch, the country’s health system has atrophied so severely that scores of Venezuelans are dying every week because of chronic shortages of medicine and ill-equipped hospitals….

This crisis has exposed the hollow promise of socialist policies Mr. Maduro and his predecessor, Hugo Chávez, have peddled since the late 1990s.

It started with the establishment of the welfare state, premised on the assurance that everyone can live at the expense of everyone else. Chávez was voted into the presidency in 1998 and continued to stay in power by a citizenry temporarily enjoying the rise in their standard of living funded by oil revenues. Chávez passed the baton to former taxi-driver Nicolas Maduro in 2013, who continued to believe that the welfare state could be maintained even as oil revenues on which it relied dropped.

As his government went into deficit, Maduro and his central banker, Merentes, borrowed, spent and created new money to keep the dream afloat. At one point in late 2015, central banking printing presses couldn’t keep up with the demand for paper currency, and so officials ordered cargo planeloads of it to be shipped in from abroad.

As prices rose as a result of the infusion of new money into the economy, Maduro followed the disastrous historical pattern: price controls. Those controls didn’t allow entrepreneurs to make a profit, so they stopped producing. The shortages were met by government rationing, along with attacks on capitalism as the cause.

In the summer of 2016, Maduro removed all pretenses by giving control of what was left of the food chain to his number one military commander, calling the move the Great Sovereign Supply Mission. Once government controlled the food supply, it controlled the people. It also allowed those in the military the opportunity to overcharge for the food, engaging in graft of historic proportions.

The natives became restless, evidence by food riots, long lines of citizens waiting to buy whatever might be left on the shelves of grocery stores, and political pushback. Poltitical opponents of the president thought there was enough left of the country’s constitution to vote Maduro out, but alas, it was too late. Maduro had replaced members of both the Supreme Court and the Electoral Council with his cronies. He the began rounding up members of his opposition, many of whom then simply disappeared.

On January 8 Maduro announced a 50-percent hike in the minimum wage — the fifth such increase in the last year, in which it has been raised it by more than 400 percent. That puts the minimum monthly salary at 40,683 bolivars, or about $12.

Eight days later Maduro, following a policy announced in December, scrapped the all-but-worthless 100 bolivar note, replacing it with new paper currency ranging from 500 bolivars (about 15 cents) to 20,000 bolivars (about $6). In making the announcement, the president repeated his charge that the new bills were necessary because of “price-gouging” by unscrupulous capitalists, the Mafia, and an economic war being waged on his country by the United States.

Since Maduro’s central banker hasn’t released any reports on the economy since late 2015, Reuters has to rely on the International Monetary Fund for its view. The IMF, reported Reuters, estimates that Venezuela’s economy, which shrank 15 percent last year, will drop another 20 percent this year. And inflation, which ravaged the currency last year by 800 percent, is expected to reach 1,600 percent in 2017. That would reduce the purchasing power of the new 20,000 bolivar note from the equivalent of six American dollars to just one. Put another way, a single arepa — a cheese-stuffed corn cake, which cost 1,000 bolivars a year ago (about $1) — will cost at least 4,000 bolivars (still about $1) in the new year.

Real remedies are scant in the media. Some, such as the New York Times, blame Maduro. Others accuse Merentes, the former head of the country’s central bank. After all, they say, he’s been overseeing his country’s economic and political destruction for the last 18 years, first as a politician, then as a professor, then as an advisor to first Chávez and then Maduro, and finally as the head of the central bank.

Some, such as Reuters, think the solution involves lifting the price controls, removing the food chain from the control of the country’s military, rolling back or eliminating altogether the hundreds of nationalizations the government has enforced, and so on. Others, such as the IMF, think Venezuela’s salvation lies with the institution of a “hard currency,” the lack of which has, according to that international central bank, “led to scarcity of intermediate goods and to widespread shortages of essential goods — including food — [which is] exacting a tragic toll. Prices continue to spiral out of control.”

Still others, such as Forbes’ contributing editor Tim Worstall, think the solution is a replacement of the present central bank with another form of central banking.

No one is pointing at the institution of central banking itself and the hubris which drives it: the notion that mathematicians and politicians such as Merentes can run an economy. No one has noted the real foundational cause of Venezuela’s increasing misery: the Venezuelans themselves. Up until Maduro removed their ability to influence government by stacking the court and the electoral council with his cronies, Venezuelans had repeatedly reelected first Chávez and then Maduro.

If blame is to be placed anywhere, it must, finally and firmly, be on the citizens themselves. Once enjoying a rich, robust and replete welfare state, Venezuelans thought that state could continue forever just by reelecting those who inflicted it upon them in the first place. Few considered what would happen when, inevitably, the currency became worthless, options were eliminated, and the music stopped. That lesson is now being taught to the hapless, helpless, and starving people of Venezuela.

attacks Central Bank Currency Deficit dictator Establishment hubris IMF Inflation Minimum Wage politician Price Controls Supreme Court wage welfare
This entry was posted on Monday, January 23rd, 2017 at 4:17 pm and is filed under Uncategorized. You can follow any responses to this entry through the RSS 2.0 feed. Both comments and pings are currently closed.
Many of the articles on Light from the Right first appeared on either The New American or the McAlvany Intelligence Advisor.