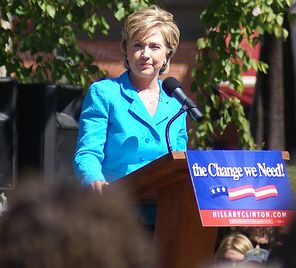 As noted by the New York Observer, these cuts indicate that “the organization’s clout was predicated on donor access to the Clintons, rather than its philanthropic work.”

Suggestions that the CGI, which called itself a “networking” adjunct to the Clinton Foundation, was primarily an influence-peddling scheme to enrich the Clintons in exchange for “access” arose in October. That’s when the anti-secrecy group WikiLeaks published e-mails from Doug Band, a co-founder of CGI, indicating how the “pay for access” scheme worked. The Washington Post, a supporter of the Clinton candidacy for president, laid bare the details:

The memo, made public Wednesday [October 26] by the anti-secrecy group WikiLeaks, lays out the aggressive strategy behind lining up consulting contracts and paid speaking engagements for Bill Clinton that added tens of millions of dollars to the family’s fortune, including during the years that Hillary Clinton led the State Department. It describes how Band help run what he called ‘Bill Clinton, Inc.’, obtaining ‘in-kind services for the President and his family — for personal travel, hospitality, vacations and the like.’

The closing of CGI confirmed Peter Schweizer’s conclusions in his book Clinton Cash: The Untold Story of How and Why Foreign Governments and Businesses Helped Make Bill and Hillary Rich, that there are “serious and alarming questions of judgment, of possible indebtedness to an array of foreign interests, and ultimately, of [Hillary’s] fitness for high public office.”

As Forbes noted in its review of the book, “The timing of policy decisions or international deals relative to donations, transcends coincidence” while Harvard Law School professor Lawrence Lessig observed, “On any fair reading, the pattern of behavior that Schweizer has charged is corruption.”

As Schweizer reveals, the pattern is predictable and repeated frequently: “Introductions are made. A deal is struck — usually to exploit natural resources such as uranium, oil, or timber, on a large and highly profitable scale. Soon after that, enormous contributions are made to the Clinton Foundation from those who benefited from the deal, while Bill is commissioned to deliver a series of highly-paid speeches. Moreover, some of these deals require approval or review by the U.S. government [which] fall within the purview of a powerful senator [Hillary] or secretary of state [Hillary].”

Schweizer revealed how Hillary was involved in facilitating the transfer of nearly 50 percent of U.S. uranium output to Russia, benefiting large donors to her foundation. He revealed how Bill was paid enormous sums for speeches given to foreign governments and businesses which just happened to have matters pending before the State Department while Hillary was secretary. He exposed how a visit by the Clintons to Colombia was followed by the grant of lucrative logging rights to a Canadian billionaire who also happened to be a Clinton Foundation donor.

But the river of financial largess in exchange for access has dried up. After all, when there’s no influence to peddle, what other reason would there be to contribute?

Bill Clinton Corruption Hillary Clinton power profit Scandal secret Wikileaks
This entry was posted on Tuesday, January 17th, 2017 at 6:30 am and is filed under Crime, Politics. You can follow any responses to this entry through the RSS 2.0 feed. Both comments and pings are currently closed.
Many of the articles on Light from the Right first appeared on either The New American or the McAlvany Intelligence Advisor.