Call Them “Suppressors,” Please, Not “Silencers”: Bill to End Their Restrictions Proposed 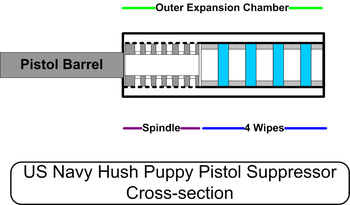 The bill in the U.S. House to end the excessive restrictions on gun suppressors is called “The Hearing Protection Act,” but is labelled a “fakery” by its detractors. Introduced last Monday by Representatives Jeff Duncan (R-S.C.) and John Carter (R-Texas), Duncan called H.R. 3799 a health issue:

I’ve been shooting since I was a young child — beginning with plinking with a .22 rifle and dove hunting with my dad. My hearing has been damaged because of gun noise.

Had I had access to a suppressor, it may have protected me, as well as millions of other Americans, from this sort of hearing loss.

This is a health issue.

For his part Carter added:

Suppressors do not make guns silent or dangerous. They are simply a form of hearing protection, both for the shooter and their hunting dogs.

Not so, wrote Michael Hiltzik in the Los Angeles Times, claiming it’s an “absurdity,” a “fakery,” and a “smokescreen” that would increase “the dangers of firearm violence.” He called it “a marketing ploy” by greedy gun manufacturers, who had the bill titled in such a way as to hide its real intent: further deregulation of firearms.

The law concerning suppressors has been in effect since 1934 with passage of the National Firearms Act (NFA), a reaction to gun violence inflicted by mobsters during Prohibition using machine guns. It imposes a $200 fee on those seeking to purchase one and an intensive background check that often takes nine months to complete. Even so, there are an estimated 900,000 gun owners who have gone to the trouble and the expense to own one legally. And none of them is a criminal.

In fact, Steve Chapman, a writer for the liberal Chicago Tribune for 17 years and formerly an associate editor for the liberal New Republic magazine, came clean in his January 14 article “Gun silencers are nothing to fear.” A graduate of Harvard University, where he served on the staff of the Harvard Crimson, the daily student newspaper, Chapman had every motive to echo Hiltzik, but he didn’t. Instead, he noted that as Chicago is coming off a ghastly year of gun violence (more than 3,500 shootings and more than 750 gun homicides), the Chicago Police Department told him, “We seldom recover silencers. Sometimes [we] may get a gun with a makeshift silencer, but even that is rare.”

Looking further, Chapman noted a study for the 10-year period between 1995 and 2005 in which there were only two federal court cases involving the use of a silencer in a murder. As Chapman explained: “That works out to [be] one serious silencer-related crime per year, in a country that, in 2015, had 16,740 homicides and 417,000 robberies.”

Chapman added, “If silencers were truly valuable to ordinary criminals, there would undoubtedly be a thriving black market and plenty of crimes committed with them.” But in 2015 the Bureau of Alcohol, Tobacco, Firearms and Explosives (still known as BATF) traced only 125 silencers, and not all of them were connected to violent crime. Besides, even a “minimally clever miscreant” can get the same noise reduction by using a towel or a pillow, noted Paul Clark, writing in the Western Criminology Review.

Moreover, suppressors do not generally make guns silent; they make them less loud. This is true especially for bullets that travel faster than the speed of sound, which is most bullets in most guns. And they tend to be very large, not an attribute that most criminals are looking for.

Under the present law, the only thing absurd is that one wanting to buy a suppressor for his firearm would have to undergo a vastly more difficult, expensive, and time-consuming application than he did in buying his firearm in the first place! All that the Hearing Protection Act would do is make those requirements the same.

But the mere notion of rolling back a law dating from 1934 based on common sense has put the Violence Policy Center into a tizzy, claiming that increased availability of suppressors would “enable mass shooters and other murderers to kill a greater number of victims more efficiently.”

The bill is also being introduced into the Senate by Republican Senators Mike Crapo (Idaho), Rand Paul (Ky.), and Jerry Moran (Kan.). A similar bill was introduced in the last Congress but never made it out of committee. This year its prospects are a lot brighter, especially because its opponents can only call it “absurd,” a “marketing ploy,” and a “fakery,” rather than articulate an argument against it. The only part anti-gunners got right is that The Hearing Protection Act, if passed, would be a de facto reduction of laws restricting the rights of owners of firearms to buy suppressors for them. Modest though it might be, its passage would still be a victory for the Second Amendment in the long war against guns.

common sense Crime firearms health Liberal rights Second Amendment
This entry was posted on Tuesday, January 17th, 2017 at 6:21 am and is filed under Politics, Second Amendment. You can follow any responses to this entry through the RSS 2.0 feed. Both comments and pings are currently closed.
Many of the articles on Light from the Right first appeared on either The New American or the McAlvany Intelligence Advisor.