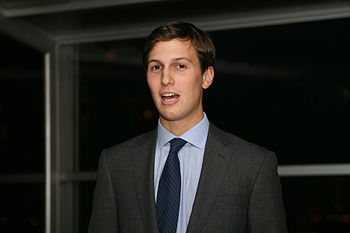 We’ve discussed this with the Office of Government Ethics. I’m very comfortable that this arrangement is appropriate under the rules. The [OGE] has given us advice and we [have] followed it.

The anti-nepotism rules don’t apply to “the immediate office of the president,” said Gorelick, and besides, Congress has passed a law saying that the president can have “total discretion” over whom he picks for his staff.

To be sure there is little conflict of interest, Kushner is ridding himself of nearly every bit of his $200 million investment portfolio. He is resigning as CEO of Kushner Companies, the real estate firm that he inherited from his father and built into a major presence in New York City. He is also resigning as publisher of his newspaper, the New York Observer. He is selling his stocks in foreign companies, and is divesting himself of his interest in his company’s property at 666 Fifth Avenue, as well as his interest in his brother’s firm, Thrive Capital. And Gorelick will be there to advise him on when he must recuse himself, as necessary, on matters that could relate to his wife’s businesses and his other remaining holdings.

Of course, the president is free to seek advice from anyone he wishes, even if the nepotism rule did apply. Kushner will serve as a non-paid staff advisor so he won’t even be a government or administration employee.

The primary reason behind Trump’s selection of Kushner as an advisor, perhaps one of his most trusted advisors, is that Kushner, according to Forbes magazine, put Trump in the White House. As Trump’s campaign began, it started from ground zero: little staff, no money, no plan, little political experience. Trump was, and is, an outsider, and he had to build his campaign from the ground up.

Unencumbered with strategies that were soon to be shown as outdated and irrelevant, Kushner initially deferred to experts in the field of data management, targeting, and fundraising online. By June last year Kushner, with the help of Brad Parscale, a web designer from San Antonio, had built a 100-person data gathering, management, and analysis team dubbed “Project Alamo.” Slowly, Kushner and his team, made up mostly of volunteers, began to learn that traditional means of messaging — TV, radio, and print advertising — just weren’t as effective as much less costly social networking through Facebook and Twitter. As the team’s abilities expanded, and Kushner’s hard-headed decision-making style refined its efforts, the Trump campaign began to focus on those networking tools “as key tools not only for spreading Trump’s message but also targeting potential supporters, scraping massive amounts of constituent data, and sensing shifts in sentiment in real time,” according to Forbes’ reporter Steven Bertoni.

Kushner was, and is, a realist. If something wasn’t working, it was jettisoned in favor of something that was:

As the campaign began to gain traction, “Project Alamo” morphed into an advisory team for Trump, dictating every campaign decision: travel, fundraising, advertising, even rally locations and the speech topic at each of them.

Eric Schmidt, the Google billionaire, admitted that Kushner learned something that traditional media people, and the Hillary Clinton campaign, didn’t:

Jared understood the online world in a way that traditional media folks didn’t. He managed to assemble a presidential campaign on a shoestring, using new technology, and [they] won.

That’s a big deal. Remember all those articles about how they had no money, no people, no organizational structure? Well, they won, and Jared [Kushner] ran it.

In less than 10 days, Donald Trump will be president, and he will need Kushner more than ever. He has learned the advantages of social networking: learning what people are thinking, what they want or don’t want, what’s concerning them, all in real time and without having the message twisted and massaged and spun by the anti-Trump media.

All Kushner has done is change not only how future presidential elections will be won or lost but how the winner will continue to connect with the people responsible for the victory.

Donald Trump elections Eric Schmidt Google Hillary Clinton media politics Technology Twitter
This entry was posted on Wednesday, January 11th, 2017 at 6:41 am and is filed under Politics. You can follow any responses to this entry through the RSS 2.0 feed. Both comments and pings are currently closed.
Many of the articles on Light from the Right first appeared on either The New American or the McAlvany Intelligence Advisor.