This article was published by The McAlvany Intelligence Advisor on Friday, January 6, 2017: 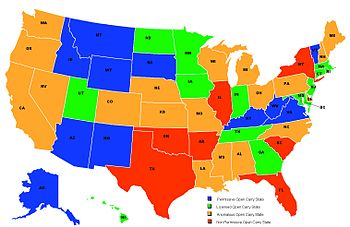 Perhaps Rep. Richard Hudson (R-N.C.) can be forgiven. After all this is just the start of his second term representing North Carolina’s Eighth Congressional District. And only a few of his votes pertained directly to the Constitution. So perhaps his voting record, as measured by the John Birch Society’s Freedom Index, isn’t really representative of his understanding of the precious document he has now sworn twice to uphold and defend.

His score of just 66 out of 100 would require remedial after-school homework in most schools in the country.

What is unconscionable is the support others who should know better are giving his bill to give the federal government the power to enforce concealed carry reciprocity across the sovereign states.

In Hudson’s statement, it all sounded very nice:

Our Second Amendment right doesn’t disappear when we cross state lines, and this legislation guarantees that. The Concealed Carry Reciprocity Act of 2017 is a common sense solution to a problem too many Americans face. It will provide law-abiding citizens the right to conceal carry and travel freely between states without worrying about conflicting state codes or onerous civil suits.

As a member of President-elect Trump’s Second Amendment Coalition, I look forward to working with my colleagues and the administration to get this legislation across the finish line.

But a close look at the language he is proposing reveals this:

[Under this new federal law] a person who carries or possesses a concealed handgun … may not be arrested or otherwise detained for violation of any law or any rule or regulation of a State or any political subdivision thereof related to the possession, transportation, or carrying of firearms…. (emphasis added)

In other words, those sovereign states, making up their own laws concerning the right to keep and bear (and travel with) firearms, as it is their sovereign right to do, would have that precious privilege erased by the federal government.

Supporters of Hudson’s bill should know better. There’s the Institute for Legislation Action, a branch of the NRA, whose director, Chris Cox, said:

Congressman Hudson’s legislation provides a much needed solution to a real problem for law-abiding gun owners. The Hudson bill would ensure that victims of crime like Pennsylvania concealed carry holder Shaneen Allen do not face decades of imprisonment merely because they took an erroneous turn into another state.

There’s Erich Pratt, the executive director of Gun Owners of America (GOA) who was pleased to announce his group’s “strong support” of Hudson’s bill, adding that “this legislation would simplify the puzzling variation of concealed carry across the states and make American safer by letting citizens defend themselves when they travel.”

When a similar bill was presented to the last Congress, it was supported by more than 200 members of the House who also could not see its dangers but only its benefits. At the time Constitutional attorney Joe Wolverton summed up the case against the bill:

The problem plaguing Americans [is] looking to Washington, D.C. for permission to do that which is beyond their authority to rule….

Our Republic was not founded by men and women who looked to government for the green light for the exercise of timeless rights that have been enjoyed by their ancestors for years….

[Any] federal law that would force states to recognize concealed carry permits issued by others states … would be unconstitutional.

To say that such a bill would have helped Shaneen Allen in her difficulty misses the point. She thought her Pennsylvania concealed carry permit would apply in New Jersey. She offered, against nearly all legal advice, the information to the New Jersey policeman (who stopped her for illegally changing lanes without signaling) that she was carrying, that she had ammunition, and had a Pennsylvania concealed carry permit. Her abysmal ignorance not only of the law but of the proper way to handle a police traffic stop, nearly cost her 10 years in jail. New Jersey Governor Chris Christie interceded at the last minute, allowing her time to learn her lesson and get on with her life.

To say that Hudson’s bill would solve the problem of the various often confusing tangle of state laws is also to miss the point: there are resources on the internet (see Sources below) for travelers to keep current with state regulations about carrying concealed.

To say that Hudson’s bill would advance reciprocity more rapidly also misses the point: more than 30 states (on their own, without federal interference) have already come to various agreements about reciprocity.

But Hudson’s bill raises more issues, and creates more problems, than it solves. His bill, if it were to become law, would abrogate states’ laws on the matter. It would extend federal power where it has no business being. It further solidifies the ham-handed interpretation of the 14thAmendment that increasingly is used to force states to adhere to limitations expressly applied only to the federal government.

It also creates the potential for disaster in the future. The 115th Congress is expected by many to push back on some laws, rules, regulations, and executive orders implemented by the previous administration. But what if, in the more distant future, a different congress with a different outlook, decides simply to repeal Hudson’s law? Where is the backstop for such a move, when the states will have been taken out of the picture?

The use of force is the giveaway in understanding Hudson’s bill. The problems it is supposed to solve are already being solved at the state and the individual level.

The bill was immediately referred to the House Judiciary Committee where it will likely reside for months until Trump’s “100-day” agenda has been completed. By then, perhaps wiser heads will prevail and drop Hudson’s bill into the trash bin of history where it belongs..

ammunition Chris Christie Concealed Carry Constitution Constitutional dangers Executive Order Federal Government firearms Freedom John Birch Society legislation NRA rights Second Amendment the law understanding
This entry was posted on Saturday, January 7th, 2017 at 6:45 am and is filed under Politics, Second Amendment. You can follow any responses to this entry through the RSS 2.0 feed. Both comments and pings are currently closed.
Many of the articles on Light from the Right first appeared on either The New American or the McAlvany Intelligence Advisor.