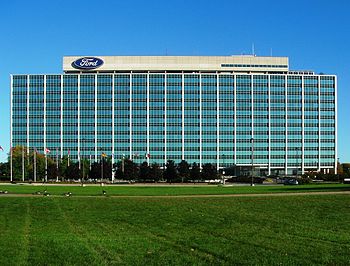 When Bill Ford, Ford Motor Company’s executive chairman, called President-elect Donald Trump on Tuesday to inform him of his company’s decision to cancel its plans to build a new plant in Mexico and instead shift some of those new jobs to Michigan, liberal eyebrows were raised. Was this a “capitulation” to Trump? Was it a “sell-out?” Was it a “peace offering?”

CNN’s Poppy Harlow interviewed Ford’s president and chief operating officer Mark Fields following the company’s announcement, attacking him mercilessly with loaded questions. She peppered him with insinuations that his company had made a political decision based upon the perceived new under-the-table realities under the incoming Trump administration. She pressed him for specifics on any deals that he and Ford made with Trump administration officials, implying that it smacked of crony capitalism.

To his credit Fields kept his cool, smiling all the way through the seven-minute interview — available for viewing at CNN.com. He explained that the decision was driven by market forces: low gas prices have made small, economical vehicles like the Focus less attractive to buyers who are snapping up larger vehicles such as the Expedition instead. There are also other market influences: growing demand for autonomous vehicles, especially as the e-hailing industry continues its remarkable growth and California’s demands for zero-emission vehicles in order to do business there.

Realists such as Rebecca Lindland, a senior analyst at Kelley Blue Book, said that Ford’s decision resulted from a convergence of politics and market forces: “If the business case is there to make this decision, and then I can make somebody like Donald Trump look better, OK, go with it.… All these worlds are colliding to make an announcement like we saw [on Tuesday] from Ford possible.”

The market pressures facing Ford are immense: Sales of its small Focus were off 17 percent last year, while sales of its much larger and much more profitable Expedition jumped 46 percent. Ford is investing $4.6 billion in plans to deliver more than a dozen new models by 2020, half of them either hybrids, electric, or AVs.

Much was made by the media about how much it was going to cost Ford to move those jobs from Mexico — where workers earn $5.50 an hour — to the United States where the average auto worker makes $28 an hour. Surely, goes the story, the move is going to cost Ford millions to bring those jobs back to the United States. Surely, there must have been some type of under-the-table deal cut to justify the decision?

Doing the math disabuses any such conclusion. Labor costs are estimated to make up just 10-15 percent of the total costs to build a vehicle, a percentage that continues to decline with the increased use of robots. Despite the labor cost disparity, other considerations balance out the decisions — considerations such as the potential for lower, perhaps much lower, corporate income taxes. With Ford’s net income in excess of $7 billion annually, that is a consideration for future planning. Other considerations are the possibility — probability? — of less onerous government regulations and Corporate Average Fuel Economy (CAFE) requirements.

There are also the unions to keep happy. The excitement expressed by Ford workers when they learned that jobs were returning to the United States bordered on exuberant. And the United Auto Workers union, which represents Ford workers, was “thrilled” with the news.

The Flat Rock, Michigan, plant where the new jobs are expected, was threatened with closure during the recession. More recently it has seen temporary layoffs mount owing to slowing sales of the company’s Mustang. Now, the new infusion of $700 million to build new models will revive the plant and keep the workers happy, as well as their union, and Donald Trump.

Oh, and there’s the not insignificant matter of incentives. Michigan has offered tax benefits and credits to Ford to enhance the decision to return those jobs to Flat Rock.

To call the decision by Ford a “sell-out” or a “capitulation” to the incoming administration is to dreadfully and inaccurately politicize a decision made in an environment with many interests involved. It’s not always about politics, and the mainstream media personalities like Poppy Harlow are simply going to have to get used to it.

Capitalism Crony Capitalism Donald Trump Economy Ford Motor Company growth incentive Jobs Liberal Mainstream Media politics Recession Regulations
This entry was posted on Thursday, January 5th, 2017 at 6:57 am and is filed under Economics. You can follow any responses to this entry through the RSS 2.0 feed. Both comments and pings are currently closed.
Many of the articles on Light from the Right first appeared on either The New American or the McAlvany Intelligence Advisor.