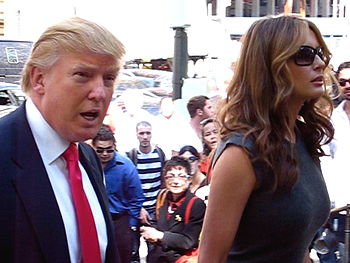 President-elect Donald Trump announced on Wednesday that 5,000 new jobs are being planned by Sprint in the United States, and another 3,000 jobs are being created here by a satellite venture company in Florida called OneWeb. Said Trump:

Because of what’s happening and the spirit and the hope, I was just called by the head people at Sprint and they’re going to be bringing 5,000 jobs back to the United States and taking them from other countries.

They’re bringing them back to the United States and Masa [Masayoshi Son — a Japanese entrepreneur and billionaire] and some other people were very much involved in that, so I want to thank them.

And OneWeb, a new company, is going to be hiring 3,000 people and that’s very exciting [as well].

It’s unclear at the moment where Sprint’s jobs are coming from, but it is clear that they will be sales, customer service, support, and call center people placed inside new stores and call centers all across the country. Sprint has announced that it is already talking with officials from various states and cities to “find the right locations” (read: take advantage of the best tax and other incentives being offered) for them, and the company expects to have everything up and running no later than the end of March 2018.

A press release issued by SoftBank, Son’s $50 billion venture capital fund, last week announced that Son was investing $1 billion in a half-interest in OneWeb Satellites, a Florida start-up with plans to build hundreds of satellites to be placed in low-Earth orbit over the next 10 years, bringing Internet access to many unconnected areas of the world. In that release Son said:

Earlier this month I met with President-elect Trump and shared my commitment to investing and creating jobs in the U.S.

This is the first step in that commitment.

America has always been at the forefront of innovation and technological development and we are thrilled to be playing a part in continuing to drive that growth as we work to create a truly globally-connected ecosystem.

The plans by Softbank to expand Sprint (which it already controls) and purchase a half-interest in a startup naturally have been in the works for months, if not years. So how much credit Trump should take over the new job creation is an open question.

What isn’t open is Trump’s commitment to keep his promise, as evidenced by his agreement with Ford and Carrier to keep jobs at home, and by positive statements from U.S. Steel and AT&T that the environment for adding jobs in America is much more agreeable now than it was just a month ago.

To his credit, Trump is working with Japanese billionaire Masayoshi Son, who is also in the habit of keeping his promises. As those jobs materialize, it will be important that people are being put to work in jobs that didn’t exist until Trump helped create the environment attractive to billionaires such as Son, encouraging them to move ahead with their plans.

Donald Trump Environment growth incentive Innovation Jobs
This entry was posted on Monday, January 2nd, 2017 at 7:21 am and is filed under Free Market, Politics. You can follow any responses to this entry through the RSS 2.0 feed. Both comments and pings are currently closed.
Many of the articles on Light from the Right first appeared on either The New American or the McAlvany Intelligence Advisor.