This article appeared online at TheNewAmerican.com on Monday, December 26, 2016: 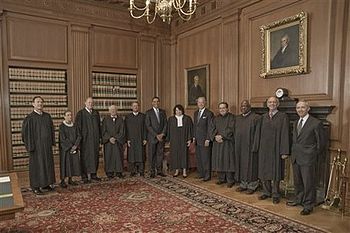 In his acceptance speech at the Republican National Convention, President-elect Donald Trump said: “The replacement of our beloved Justice Scalia will be a person of similar views, principles and judicial philosophies…. This will be one of the most important issues decided by this election.”

With the election decided, reality is beginning to set in on both sides of the aisle. John Malcolm, senior legal fellow at the Heritage Foundation, said that each of Trump’s 21 potential nominees to replace Scalia is “outstanding … with a breadth of legal experience who have each distinguished himself.” Malcolm might well say that, as six of the eight people he recommended to the Trump transition team turned up on Trump’s list.

But the opportunity to reshape the judicial environment in the United States extends far beyond filling the Scalia vacancy. There are 104 current vacancies (including Scalia’s) all across the federal bench, with 38 of them termed “judicial emergencies” — where a court’s backlog of cases exceeds 600, or where the vacancy has lasted longer than 18 months. Thirteen of those 104 are on federal appeals courts, 82 are in U.S. district courts, and the remainder are in courts of special jurisdiction (i.e., the U.S. Court of Federal Claims).

The 9th U.S. Circuit Court of Appeals bears special mention. The largest (with 29 judges) and the most liberal (it has one of the highest Supreme Court reversal rates), Trump will have the opportunity to tone it down by filling four vacancies there.

Since the Supreme Court handles an average of 75 cases a year, most of Trump’s impact will be felt at the lower levels where tens of thousands of cases are adjudicated every year. And while the Supreme Court focuses on the Constitution, the lower courts have the opportunity to set the legal tone on everything from state gun laws to abortion to immigration to voting rights.

President Obama turned many of the courts in his direction during his time in office. For example, he appointed far more female and minority judges than any other president in history. In addition, when Obama took office there was only one openly gay or lesbian judge on the bench. He appointed 11 more. In addition, only one of the 13 regional circuit courts had a majority of Democratic-nominated judges, but today nine do.

Russell Wheeler of the liberal Brookings Institute lamented that Trump’s impact on the legal and judicial environment could be massive, predicting that in less than four years Republican appointees would hold about half of the 673 district judgeships, while they hold just a third now.

Resistance is building against the Trump juggernaut. Senate Democrats, holding 46 seats (plus 2 Independents who usually vote Democratic), have already indicated that they intend to fight nearly every one of Trump’s cabinet nominees. California Senator Dianne Feinstein heads up the group, informally calling itself “the resistance.” That group is more than likely going to resist Trump’s judicial nominations as well, slowing down the process.

Given Trump’s determination to fill Scalia’s vacancy first, it’s likely that he won’t get much traction on other nominations until June at the earliest. By that time it’s estimated there will be even more openings (perhaps 120 or more) for him to fill. With the passage of time Trump’s potential influence on the country’s legal system could grow even larger.

It will happen over time, just not overnight.

Abortion Constitution Democrat Environment Harry Reid Heritage Foundation immigration Liberal Mitch McConnell reality resistance rights Supreme Court
This entry was posted on Tuesday, December 27th, 2016 at 7:45 am and is filed under Constitution, Politics. You can follow any responses to this entry through the RSS 2.0 feed. Both comments and pings are currently closed.
Many of the articles on Light from the Right first appeared on either The New American or the McAlvany Intelligence Advisor.