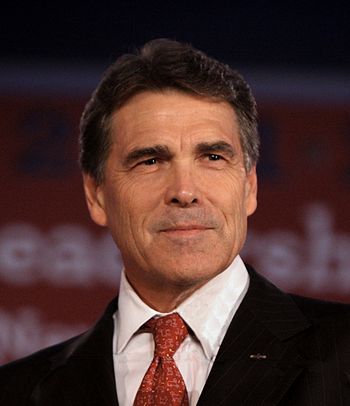 Former Texas Governor Rick Perry (shown) said that it’s likely his first presidential run ended during a Republican debate in 2011. He ran on a platform of cutting government and when he was asked by a moderator which agencies he would eliminate, Perry responded:

I will tell you, it is three agencies of government when I get there that are gone: Commerce, Education, and the… what’s the third one there? Let’s see… Oops.

It was his inability to remember the third one — the Department of Energy — that he later claimed was a major factor in his dropping out of the race.

He gave himself a “second chance” to run in 2016, but was the first to drop out when his campaign failed to gain traction or financing. Now Perry has a “third chance”: this time to run the department he threatened with extinction five years ago.

A successful governor — the longest administration in Texas history and the second longest of any governor ever — Perry was reelected by substantial margins before finally retiring in 2013 after 14 years in office.

Perry is going to have his hands full running the agency he wanted to abolish. With a budget approaching $30 billion a year and 13,000 employees, plus another 93,000 contractors, his agency not only oversees energy “policy” but also the nation’s aging arsenal of nuclear weapons. In fact, 60 percent of his budget is dedicated to nuclear safety and nuclear production for military purposes, nuclear waste disposal, and research. His agency also directs research in genomics.

He spelled out his conservative philosophy in the fly leaf of his 2012 book Fed Up! Our Fight to Save America From Washington. It served as a template for Trump’s slogan “Make American Great Again” three years before Trump began his campaign:

We are fed up because deep down we know how great America has always been, how many great things the people do in spite of their government, and how great the nation can be in the future if government will just get out of the way.

Our fight is clear. We must step up and retake the reins of our government from a Washington establishment that has abused our trust.

In February Perry joined the board of directors of Energy Transfer Partners (ETP), which owns and operates some 62,500 miles of oil and natural gas pipelines. ETP is the same company trying to complete the Dakota Access pipeline near Cannon Ball, North Dakota. No doubt Perry is hoping to get some help for the project from his new boss. Trump spokesman Jason Miller said the crude oil conduit is “something that we support construction of, and we’ll review the full situation once we’re in the White House and make an appropriate determination at that time.”

Conservative cutting Department of Energy North Dakota oil Republican Rick Perry
This entry was posted on Wednesday, December 14th, 2016 at 6:54 am and is filed under Energy, Politics. You can follow any responses to this entry through the RSS 2.0 feed. Both comments and pings are currently closed.
Many of the articles on Light from the Right first appeared on either The New American or the McAlvany Intelligence Advisor.