This article appeared online at TheNewAmerican.com on Wednesday, December 7, 2016: 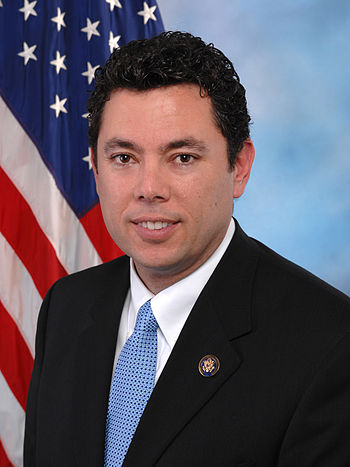 With the help of Representative Jason Chaffetz (R-Utah – shown)), the chairman of the House Oversight and Government Reform Committee, President-elect Donald Trump is narrowing his focus on just how, starting on his first day in office, he plans to start cutting government.

Trump made many promises on the campaign trail, many of them glittering generalities:

Trump has already announced a hiring freeze beginning on his first day in office (relying on natural attrition to reduce the federal workforce), but that, according to plans now being finalized, will be just the beginning. He plans to “green light” the firing of poor performers, place a ban on “official time” — doing union business on company time — and present legislation that would change retirement plans for new employees. This last proposal is one that Chaffetz has pushed: setting up self-directed 401K plans in place of defined benefit plans that federal employees now enjoy. The latter place a special burden on taxpayers who guarantee those benefits regardless of the amount of monies paid into the plan.

Vice President-elect Mike Pence also offered a recommendation that he put in place as Indiana’s governor: performance bonuses for truly outstanding work instead of “automatic” raises that are based only on longevity on the job.

Many of Trump’s changes have been in the works for years but political intransigence has stalled many of them. Even the liberal Washington Post admitted:

Many inside and outside government agree that change to the way federal workers are hired, promoted and disciplined is long overdue. Employees under investigation for breaking the rules can sit at home for years — collecting paychecks and benefits — while their cases drag on.

Performance rankings are widely panned as a joke because the vast majority of workers are rated as exceeding expectations or doing outstanding work.

Federal workers are seldom fired for poor performance — and it can take years for managers to make a successful case for dismissal for misconduct.

In fact, civil service rules are so onerous that most managers, faced with even the most egregious cases of poor performance, don’t even bother to move to fire a government worker: It’s easier just to put up with it. Consequently, this stat from the Bureau of Labor Statistics doesn’t surprise: about 0.5 percent of civil servants get fired every year. That’s one out of every two hundred.

Civil service protections were put in place more than 130 years ago, but they have long ago outlived their initial purpose: to keep administrations from using jobs as a “spoils” system to reward party supporters. Today, according to Paul Light, a professor at New York University, “The civil service system fails at almost everything it was designed to do. It’s very slow at hiring, negligent in disciplining [and] permissive in promoting.”

One thing missing from the conversation is the one thing that would work best at reducing government: following the limitations placed on the federal government by the Constitution. Under Article 8, the duties have been enumerated, limited, and then guaranteed under the 10th Amendment: “The powers not delegated to the United States by the Constitution, nor prohibited by it to the States, are reserved to the States respectively, or to the people.” Just following the Constitution would, it has been estimated, cut the government by at least 80 percent.

In the present environment, however, Trump may get a little help from an unexpected source: government employees themselves. A poll taken by the Government Business Council back in January showed that, in the event of a Trump victory in November, 14 percent of those government employees polled said they would “definitely” consider leaving their jobs, while another 11 percent said that “maybe” they would quit. Most of those polled declared themselves to be Democrats, so if they keep their word, the new administration would see a sharp decline in government payrolls by the very people who oppose him and his policies. Without lifting a finger, Trump would be keeping one of his most serious and determined promises.

Constitution cutting Donald Trump Federal Government Fraud Jobs Mike Pence Retirement taxpayer
This entry was posted on Thursday, December 8th, 2016 at 6:34 am and is filed under Constitution, Politics. You can follow any responses to this entry through the RSS 2.0 feed. Both comments and pings are currently closed.
Many of the articles on Light from the Right first appeared on either The New American or the McAlvany Intelligence Advisor.