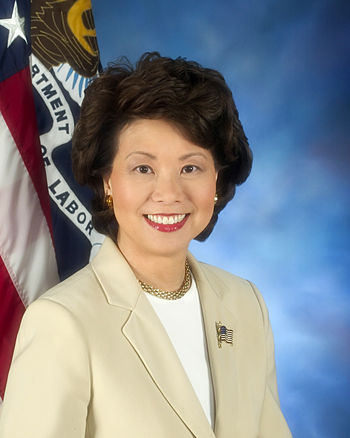 President-elect Donald Trump picked Elaine Chao shown) for secretary of the U.S. Department of Transportation on Tuesday, raising concerns about her connections with the Republican establishment as well as China. Some of those concerns are balanced by her affiliations with pro-freedom and pro-free market organizations.

If confirmed, she will face a host of issues, including managing a $1 trillion program to rebuild the nation’s infrastructure of bridges, tunnels, airports, railroads, ports, waterways, and pipelines (assuming the package is funded by Congress). She will be tasked with reducing or eliminating the “burdensome regulations” often derided by Trump during his campaign. There are the ongoing issues of safety recalls due to airbag failures affecting some 50 million vehicles that were recalled in 2015. She will be challenged with finding a way to accommodate drones flying in U.S. airspace, and completing a “comprehensive review” of the government’s present fuel economy and emissions standards. There’s talk of privatizing the air traffic control system. And her agency will continue to monitor General Motors in its ongoing issues with ignition-switch failures that have allegedly resulted in 124 deaths.

Chao arrived in the United States on a freighter in 1961 at age eight along with her family, who were fleeing the communist revolution on mainland China. After obtaining degrees from Mount Holyoke College and the Harvard Business School, she worked her way up to vice president of syndications at the Bank of America and then worked in international banking for Citigroup. Following that, she served as deputy transportation secretary in the George H.W. Bush administration.

She then was named director of the Peace Corp, after which she worked for four years as president and CEO of United Way, rebuilding that group’s credibility following a financial scandal involving the previous president.

There are both “pluses” and “minuses” about Chao’s nomination by Trump to be his transportation secretary.

She has been heartily endorsed by former Secretary of Transportation James Burnley under President Ronald Reagan, who said that Chao “knows DOT [the Department of Transportation] and its issues well” and “is a strong believer in free markets, and I expect she will approach most economic issues from that perspective.”

A not-so-friendly endorsement came from Thomas McGarity, a law professor at the University of Texas and author of Freedom to Harm, a book about the labor department that included some of Chao’s tenure. He told the Associated Press that she is likely to be “skeptical” of adding new regulations and may in fact attempt to roll some of them back. He added “She’s not going to be especially inclined to second-guess the [automobile] industry when they say that [a new technology] is safe.” McGarity added that Chao is “a strong advocate of letting the markets function as they will [and] not intervening into private sector arrangements.” Under Chao, OSHA (the Occupational Safety and Health Administration) — part of the Department of Labor — didn’t issue a single significant new safety regulation for four years.

Also on the “political” plus side for Trump, Chao has been married to Senate Majority Leader Mitch McConnell since 1993, which could prove politically useful when Trump brings his gigantic infrastructure funding bill to the Senate (assuming it gets past the House first).

Another plus: she served as a board member of Bloomberg Philanthropies until that group decided to back the Sierra Club’s “Beyond Coal” initiative that would hurt coal miners in her state of Kentucky. Then she resigned.

She also got a “negative” endorsement from the mouthpiece of the liberal establishment, the New York Times, which described Chao as “an unapologetically ambitious operator with an expansive network, a short fuse, and a seemingly inexhaustible drive to get to the top and stay there.” This negative endorsement is rated as a plus for Chao.

She worked closely for many years with both Bushes, unequivocal establishment insiders, while her stints with the Bank of America and Citigroup added their luster to her already expanding resume.

She is a member of the world-government-promoting Council on Foreign Relations (CFR) and was part of a coalition of former Bush administration officials that came out at the last minute in support of Donald Trump, including former Treasury Secretary John Snow, former U.S. Attorney General John Ashcroft, and former Health and Human Services Secretary Tommy Thompson.

At a ceremony in Shanghai in 2013 Chao said, “The U.S.-China relations[hip] is among the most important bilateral relationships in the world. And as such, there is no other alternative but to have a harmonious and a cooperative relationship. As with any relationship, there are bound to be ups, downs, disagreements, but in the overall scheme of things, in the overall direction, for the benefit of the world, [the] U.S. and China must get along, and must find a way to do so.” This, it must be remembered, is the same Chinese government that murdered tens of millions of its citizens, and that sponsors organ harvesting through kidnapping, as shown in a documentary by NTD Television in 2012.

On top of all that, there is the nasty bit of business that was exposed by the liberal Nation in October 2014: One of the cargo ships belonging to Chao’s father, the owner of Foremost Maritime Corporation, the Ping May, was found, during a routine inspection by Colombian authorities, to contain ninety pounds of cocaine. It was headed from Colombia to the Netherlands. The Nation gleefully reported further that Chao’s family had made substantial gifts to the couple while supporting financially McConnell’s run for the Senate that year.

Chao’s checkered history, though not enough to prove that Trump has sold out, is certainly enough to raise a red (pun intended) flag. The hope is that Trump is smart enough to know when he’s being manipulated into taking positions that he opposes by the likes of Elaine Chao.

China communist Council on Foreign Relations Donald Trump Establishment Free Market Freedom George W. Bush Heritage Foundation Mitch McConnell politics Private Sector Regulations Ronald Reagan Technology
This entry was posted on Thursday, December 1st, 2016 at 6:35 am and is filed under Free Market, Politics. You can follow any responses to this entry through the RSS 2.0 feed. Both comments and pings are currently closed.
Many of the articles on Light from the Right first appeared on either The New American or the McAlvany Intelligence Advisor.