Trump Meets With Former Banker Who Wants to End the Fed

This article appeared online at TheNewAmerican.com on Tuesday, November 29, 2016: 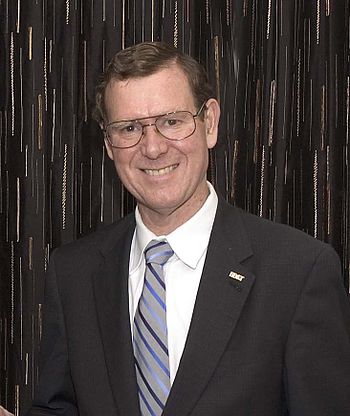 Donald Trump met with former banker John Allison on Monday in a meeting that was largely ignored by the mainstream media. It remains unclear whether Allison was being interviewed for the job of secretary of the Treasury or was just giving Trump some advice from a free market perspective.

Either way, it’s a breath of fresh air in an era where statism and excessive hubris (the idea that mere politicians and economists can guide, even stimulate a $20-trillion-dollar economy with monetary policy) has reigned for decades.

Right after graduating Phi Beta Kappa from the University of North Carolina in 1971, Allison joined Branch Banking and Trust Corporation (BB&T). By 1989 he was the CEO and had turned a small rural North Carolina bank with $4.5 billion in assets into a behemoth with current assets approaching a quarter of a trillion dollars. After retiring, he took over the presidency of the Cato Institute, leaving that position in 2015 but remaining on its board of directors.

In his formative years Allison discovered free market author Ayn Rand through her bestseller Atlas Shrugged, which has continued to have an impact on him ever since. He gave a copy of the book to every senior executive at the bank and always urged new employees to read it as part of their initial training. His charitable foundation gives grants to local colleges to explore how the free market works. Allison calls Rand’s book “the best defense of capitalism ever written.”

He opposed the Supreme Court’s decision in the controversial eminent domain case Kelo v. New London, explaining: “The idea that a citizen’s property can be taken by the government solely for private use is extremely misguided. In fact, it’s just plain wrong. One of the most basic rights of every citizen is to keep what [he] owns.” And then, in a quote that made him famous (or infamous, depending on the audience), Allison declared of his bank:

As an institution dedicated to helping our clients achieve economic success and financial security, we won’t help any entity or company that would undermine that mission and threaten the hard-earned American dream of property ownership.

In other words, his bank wouldn’t help finance any entity seeking to build a project on land seized by eminent domain.

Allison is a vocal critic of Dodd-Frank, the massive law that was enacted in response to the Great Recession. He has called for its repeal, especially the noxious unaccountable Consumer Financial Protection Bureau.

Allison saves most of his ire for the Federal Reserve. In an interview with Dan Indiviglio on the Atlantic Business Channel last year, he stated:

We wouldn’t have had a bubble in the economy if the Fed hadn’t printed too much money. It ended up in the housing market because of Freddie Mac and Fannie Mae, those two giant government-sponsored enterprises.

So it wasn’t really the regulatory structure that created the problems, it was government policy from the Fed and [then] through Freddie Mac and Fannie Mae.

In 2012 he told reporters at the Pittsburgh Tribune-Review that if he were in charge, he would end the Fed, adding:

I believe that as long as the Fed exists, Congress can print money. And it doesn’t matter if they are Democrats or Republicans; they would rather print money than tax people. They want to spend because that buys votes, [but] they don’t want to tax people because that loses votes.

Though Donald Trump has not called for ending the Fed, he has called for auditing the Fed and has criticized it. On February 22 he tweeted, “It is so important to audit the Federal Reserve.” And he warned on September 26 in his first presidential debate with Hillary Clinton, “We are in a big, fat, ugly bubble…. And we have a Fed that’s doing political things…. The Fed is being more political than Secretary Clinton.” One of Trump’s campaign strategists and advisors, Roger Stone, stated of Trump: “He’s not a big fan of the Fed. He is scaring the central bankers; he is scaring the Washington/Wall Street/D.C. consultant/lobbyist class. He’s deeply suspicious of the Fed and I think he is open-minded about the Fed. I’d suspect [that if Trump wins in November] you’d get an audit of the Fed.”

In a column published this week, former presidential candidate Ron Paul urged the president-elect not only to audit the Fed as promised, but to end it: “Those of us who understand that changing monetary policy is the key to making America great again must redouble our efforts to convince Congress and the new president to audit, and then end, the Federal Reserve.”

Whether Allison is interviewing for the position of Treasury secretary or just giving advice to Trump on monetary policy, the fact that he is speaking to the president-elect about it from a free market perspective is most encouraging. It’s a breath of fresh air blowing through the fetid swamp of Washington, D.C.’s statism and excessive hubris.

Ayn Rand bankers bubble Capitalism Cato Institute Central Bank Donald Trump Economy Eminent Domain Fannie Mae Federal Reserve Free Market Great Recession hubris Mainstream Media Monetary Policy politician Ron Paul Statism Supreme Court Wall Street
This entry was posted on Wednesday, November 30th, 2016 at 7:09 am and is filed under Free Market, Politics. You can follow any responses to this entry through the RSS 2.0 feed. Both comments and pings are currently closed.
Many of the articles on Light from the Right first appeared on either The New American or the McAlvany Intelligence Advisor.