Who Will Be the Next DNC Chair?

This article was published by The McAlvany Intelligence Advisor on Monday, November 14, 2016: 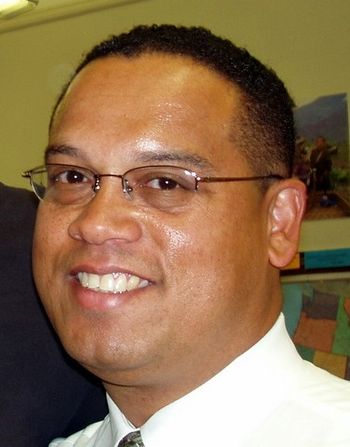 With Debbie Wasserman Schultz out as DNC chair in July, and Donna Brazile’s temp job as interim chair ending shortly, top Democrats are searching for just the right person to bring the Democrat Party back from extinction following its near obliteration last Tuesday. He must be able to think on his feet, survive scandals, bury opponents, deflect accusations, accept high-risk endorsements, and vote against the Constitution. If he’s black, that’s a plus. If he’s a radical Muslim, even better.

Enter Keith Ellison (pictured above), member of the House from Minnesota.

Ellison said he’s up for the job and will make a formal announcement on Monday.

The first Muslim elected to the House of Representatives in 2006, he offended many by turning down the Bible during his “photo-op” swearing-in ceremony and using a Quran instead. This outraged Dennis Prager:

For all of American history, Jews elected to public office have taken their oath on the Bible, even though they do not believe in the New Testament, and the many secular elected officials have not believed in the Old Testament either. Yet those secular officials did not demand to take their oaths of office on, say, the collected works of Voltaire or on a volume of New York Times editorials, writings far more significant to some liberal members of Congress than the Bible. Nor has one Mormon official demanded to put his hand on the Book of Mormon. And it is hard to imagine a scientologist being allowed to take his oath of office on a copy of “Dianetics” by L. Ron Hubbard.

So why are we allowing Keith Ellison to do what no other member of Congress has ever done – choose his own most revered book for his oath?

The answer is obvious – Ellison is a Muslim.

Ellison has a raft of credentials completely acceptable to the Democrats making the choice: he is a leader of the House Progressive Caucus, he is a former steering committee member of the communist National Lawyers Guild, he received an endorsement from the Communist Party USA, he was arrested (along with seven other far-left Democrats) for blocking traffic on Independence Avenue in Washington in 2013 during an immigration “rally,” he has suffered repeated suspensions of his driver’s license for his failure to pay various traffic tickets and resulting fines, he has failed to pay his income taxes for five years running, which forced the IRS to put liens on his home, he has endorsed far-left radical Louis Farrakhan, he has been repeatedly sanctioned for violating election campaign rules and was sued twice over them by the Minnesota Attorney General, he has had a 10-year close relationship with Farrakhan’s Nation of Islam as well as the Muslim Brotherhood and has accepted campaign contributions from both groups during his various reelection campaigns, and his disdain for the U.S. Constitution shows up with a Freedom Index rating of 25 out of 100.

When the Republican Party’s platform in 2012 contained a statement that “there must be no use of foreign law by U.S. courts in interpreting our Constitution and laws … nor should foreign sources of law be used in State courts [or for] adjudication of criminal or civil matters,” Ellison responded:

It’s an expression of bigotry … why do they [the Republicans] want to become the party of hate? They’re hating on immigrants … they’re demonstrating hatred toward Muslims….

Who could be more perfect than that? Ellison is a gift to the Democrats. He should win in a walk.

The Wall Street Journal: Keith Ellison, Howard Dean and the Mission Ahead of the Next DNC Chairman

Dennis Prager: America, Not Keith Ellison, decides what book a congressman takes his oath on

communist Constitution Democrat immigration Income Tax Islam Liberal progressive radical Scandal Taxes
This entry was posted on Monday, November 14th, 2016 at 4:19 pm and is filed under Politics. You can follow any responses to this entry through the RSS 2.0 feed. Both comments and pings are currently closed.
Many of the articles on Light from the Right first appeared on either The New American or the McAlvany Intelligence Advisor.