This article appeared online at TheNewAmerican.com on Monday, November 14, 2016:

Upon learning that Donald Trump named the chairman of the Republican National Committee (RNC), Reince (pronounced “rains”) Priebus to be his chief of staff, Michael Savage called him “the enemy within.” Savage, the host of a popular talk show with 20 million listeners nationwide, added:

He’s the RNC! Everything the voters rejected. He will steer Trump away from every policy we sent him to D.C. to change. He is the enemy within. He is [Paul] Ryan, [Mitch] McConnell, and the Old Guard. They do not want change. 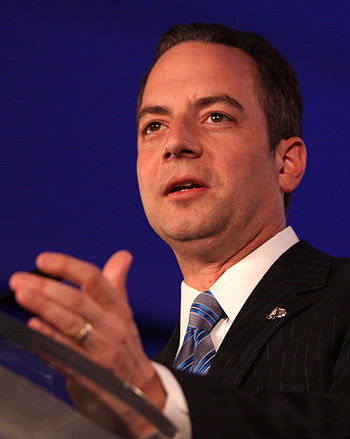 No Washington insider, regardless of who it is, should serve as President Trump’s chief of staff. Appointing Reince Priebus or any other DC establishment insider would make it more difficult, not less, for President Trump to achieve the change the people voted for. It’s time to drain the swamp — not promote insiders beholden to the Washington establishment who helped create it.

It’s apparent that Trump’s selection was based more upon Priebus’ ability to administer the operation of Trump’s coming professional life and less upon his intention to manipulate it according to an ideology that might differ from his own. In his announcement, for example, Trump gave Steve Bannon top billing as his senior counselor and political strategist, creating what the Washington Times called an “equal ranking” of authority with Priebus: “In other words, when the chief of staff and the chief strategist are at odds, one doesn’t get to overrule the other — only the president will be able to do that.”

As an administrator and a negotiator, Priebus has an impressive record. As chairman of Wisconsin’s Republican Party, he is credited with helping Paul Ryan, the speaker of the house, and Scott Walker, the present governor of the state, into power on the state level and prominence nationally. What makes this remarkable is that Wisconsin has traditionally been a Democrat stronghold, heavily influenced by union power.

He’s also a negotiator. As chairman of the Wisconsin Republican Party, he helped steer it to victories in November 2010 when it won control of the State Senate and Assembly, while putting Walker into the governor’s mansion. He was able to enlist the help of the Tea Party, then in its ascendancy, to work with the party.

When he was elected as chair of the RNC in January 2011, the party was in shambles. It was $23 million in debt, it had severely strained relationships with major donors in the wake of the defeat the previous November, and it was rapidly becoming a shadow of its former self. By the end of his first year, Priebus had regained the confidence of 1,000 of those donors, each pledging $30,000 annually to replenish the party’s coffers. He raised $88 million and reduced the party’s debt to under $12 million.

In January 2013, Priebus was elected to a second term where he showed his mettle to the national media. Both CNN and NBC were planning on running “biopics” — a favorable biographical movie — on Hillary Clinton. Preibus told both networks that if they ran them — “free campaigning on Clinton’s behalf,” according to columnist Jennifer Rubin — neither would be invited to moderate a Republican primary debate. The biopics were cancelled.

After being elected to a rare third term nearly unanimously in January 2015, Priebus faced a similar situation. In the October debate, there were clashes between the Republican candidates and the NBC News “moderators,” and so Priebus announced that the network would not host the February 16, 2016 debate. At the time Priebus said that NBC had conducted the debate in “bad faith”, adding:

While debates are meant to include tough questions and contrast candidates’ visions and policies for the future of America, CNBC [a division of NBC Universal] moderators engaged in a series of “gotcha” questions, petty and mean-spirited in tone, and designed to embarrass our candidates.

Despite demands that Priebus pull the party’s financial support from Trump as his candidacy began to gain traction, he stayed the course, not only giving Trump’s campaign staff access to the party’s get-out-the-vote technology but also helping him prepare for his debates with Clinton and joining him in numerous campaign appearances.

Priebus’ duties as chief of staff include overseeing the White House staff, managing Trump’s schedule (including who gets to see him and who doesn’t), and determining what information Trump gets to see. He will be in a position to negotiate with members of Congress on the president’s behalf, along with extra-governmental political groups seeking influence.

Some are concerned that, given such influence, Priebus might become the Bob Alexander of the 1993 film Dave, where Alexander, as President Bill Mitchell’s chief of staff, sought to manipulate Mitchell’s nearly fatal stroke into an opportunity for Alexander to become president without going to the people for a vote. In one scene Alexander reminded the White House communications director, who was in on the conspiracy, that he deserved to be president because “as you remember I was a senator and am a member of the Trilateral Commission.”

Or he might become President Richard Nixon’s chief of staff, H. R. Haldeman, who became involved in the Watergate Affair and was convicted and imprisoned for perjury, conspiracy, and obstruction of justice. So intimidating was Haldeman that he called himself “Nixon’s SOB,” with some actually fearing for their lives if they crossed him.

Or he might become an Edward Mandell House, Woodrow Wilson’s “alter ego,” or as author Godfrey Hodgson put it in the title of his book about House, Woodrow Wilson’s Right Hand. In that role House largely assumed the role of president, helping draft the Treaty of Versailles following the First World War, as well as the Covenant of the League Nations.

So influential was House that he helped four men become governor of Texas, becoming for each of them an unofficial advisor. One of them — James Hogg — named House to his staff and gave him the moniker “Colonel.”

House also planned Wilson’s 1916 reelection campaign, according to Hodgson: “He planned its structure, set its tone, guided its finance, chose speakers, tactics and strategy; and, not least, handled the campaign’s greatest asset and greatest potential liability: its brilliant but temperamental candidate.”

It’s far too soon to suggest that Priebus will inhabit the cloaks of any of these characters, mythical or real. Priebus has no scandals that this writer can find that mar his history. He doesn’t belong to either the Trilateral Commission or the Council on Foreign Relations. He has no apparent links or obligations to Goldman Sachs or, for that matter, any of the major banks, George Soros or the Gates Foundation. He appears to be exactly what he is: a highly capable administrator and not an evil manipulator. Just in case, however, Trump has put in place the “safety net,” giving neither Priebus nor Bannon veto power on matters of policy. He has reserved that final authority to himself.

Council on Foreign Relations Donald Trump Establishment George Soros Goldman Sachs Hillary Clinton ideology Paul Ryan Richard Nixon Scott Walker Tea Party Technology Washington
This entry was posted on Monday, November 14th, 2016 at 4:38 pm and is filed under Politics. You can follow any responses to this entry through the RSS 2.0 feed. Both comments and pings are currently closed.
Many of the articles on Light from the Right first appeared on either The New American or the McAlvany Intelligence Advisor.