This article appeared online at TheNewAmerican.com on Monday, November 7, 2016: 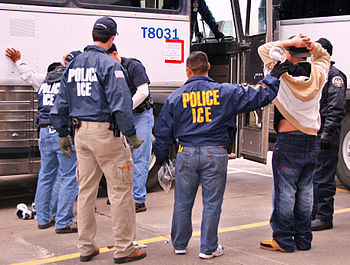 In September the National ICE Council, representing some 5,000 Immigration and Customs Enforcement officers charged with protecting the country’s borders, did something it has never done: It endorsed a candidate for president: Donald Trump. In its statement at the time, the union said:

In [Trump’s] immigration policy, he has outlined core policies needed to restore immigration security — including support for increased interior enforcement and border security, an end to Sanctuary Cities, an end to catch-and-release, mandatory retainers, and the canceling of executive amnesty and non-enforcement directives.

On the contrary, said the union, Hillary Clinton supports furthering “amnesty” and a “radical” immigration plan that will cost thousands of Americans not only their jobs but their lives.

On Friday the union issued a “final warning,” expanding its concern about how open borders would cost Americans their lives. Wrote the council’s president, Chris Crane:

Hillary’s pledge for ‘open borders’ will mean disaster for our country, and turn the present border emergency into a cataclysm. Hillary’s plan would unleash violent cartels and brutal transnational gangs into US communities and cause countless preventable deaths….

ICE officers on the front lines are witnessing a deluge of illegal immigration unlike anything we have seen before. The corporate-funded media won’t cover it. Our officers are being ordered to release recent border-crossers with no idea what their intentions are or what they are planning. Gang members, drug cartels and violent smugglers are taking advantage of the situation and threatening American communities. The influx is overwhelming public resources, especially in poor communities — including Hispanic communities and immigrant communities bearing the economic brunt of the illegal immigration surge.

There are economic, cultural, and moral reasons for concerns about open borders, as noted by economist Gene Callahan. Unlimited immigration would likely lead to lower wages for Americans who would have to cut their wage demands or be replaced by immigrant workers willing to work for lower wages.

Culturally an unlimited dumping of immigrants onto an unprepared and unsuspecting culture would alter that culture irreparably. Consider the Native American culture, he said:

If Native Americans had been able to limit the flow of European immigrants, they might have been able to preserve their land and cultures.

Morally there is a responsibility to take care of those less able to care for themselves but not to the point of reducing their own circumstances to penury:

While the rich have an obligation to help the poor, that obligation does not extend to the degree that they must become poor themselves.

Since every resident in the United States, except maybe for those Native Americans, is either an immigrant or a descendant of one, it makes sense to welcome immigrants. Until 1875, there were no immigration laws. But with the passage of the Page Act of 1875, legislators began defining the procedures under which those desiring to immigrate into the country would have to follow.

Since then immigration laws have been heavily modified, but they have always defined those procedures and conditions. If the laws need to be changed again, then legislators should change them. But they must be followed, not ignored for political purposes. Otherwise, unintended consequences, such as those noted in the ICE Council’s warning, will overtake the culture and risk destroying the very culture that makes it presently so inviting for those seeking a better life.

consequences Donald Trump Hillary Clinton Illegal Immigration immigration intent law radical the law unintended
This entry was posted on Monday, November 7th, 2016 at 3:09 pm and is filed under Politics. You can follow any responses to this entry through the RSS 2.0 feed. Both comments and pings are currently closed.
Many of the articles on Light from the Right first appeared on either The New American or the McAlvany Intelligence Advisor.