This article appeared online at TheNewAmerican.com on Monday, October 31, 2016: 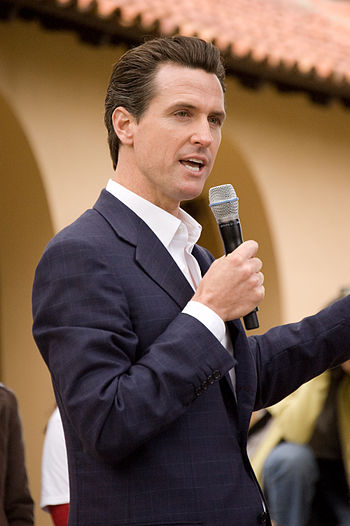 California Lt. Governor Gavin Newsom’s campaign to run for something (either governor of the state or for Dianne Feinstein’s Senate seat when she retires) in 2018 is likely to get a significant boost when Proposition 63 passes next month. Prop 63 won’t do anything to restrict criminal gun violence, but it will raise him from obscurity, provide his campaign (which he announced in February last year) with mailing lists and funding sources, and propel him into national prominence.

In other words, Prop 63 is all about Newsom. As sponsor of the anti-gun, anti-Second Amendment bill, Newsom has taken plays from the Brady anti-gun playbook and sold them to the California low-information voters, who are being influenced by the bill’s support from Senators Feinstein and Barbara Boxer, various mayors, and three of the state’s largest newspapers. At last count, more than 90 percent of Democrats and a hefty majority of Republicans support the bill.

The bill, which Newsom calls his “Safety for All” measure, would, he says, “help save countless lives.” Its primary focus, according to Newsom, is on ammunition: It would, effective January 1, 2018, require purchasers of ammunition to undergo background checks and have the sale recorded permanently onto a new database maintained by the California Department of Justice. If a seller sells more than 500 rounds in any 30-day period, he would have to become a licensed ammunition vendor and would be forced to sell ammunition only face-to-face, not by mail.

In addition the proposition would create a “new court process … for the removal of firearms from individuals upon conviction of certain crimes” according to the state’s voter information guide. In addition, it would ban the possession of magazines holding more than 10 rounds. That guide goes on to parrot the traditional anti-gun promises of similar bills:

Proposition 63 will improve public safety by keeping guns and ammunition out of the wrong hands. Law enforcement and public safety leaders support Prop. 63 because it will reduce gun violence by preventing violent felons, domestic abusers, and the dangerously mentally ill from obtaining and using deadly weapons and ammo.

That it’s a phony political ploy is evident from the fact that the bill would only apply to California residents. Nonresidents would be exempt. Nonresidents such as criminals, illegal immigrants, out-of-state terrorists, gang members and convicted felons “can bring ammunition into California all they want,” according to Kim Rhode. Rhode, a six-time Olympic medal winner in the shooting sports and an honorary life member of the National Rifle Association, added: “This tells you how fundamentally twisted this proposition really is. It will cause the police and the state to divert resources to monitor law-abiding citizens [who] are not causing any problems, but will do nothing to stop criminals.”

Rhode is joined by numerous individuals and groups who see the bill for what it really is, including 10 professional law-enforcement associations and John Malcolm, director of the Edwin Meese III Center for Legal and Judicial Studies at the Heritage Foundation:

This law would make criminals out of people who are morally blameless. These are special taxes and background checks on ammunition, just to make it more difficult for law-abiding citizens to keep and bear arms. It’s an assault on the Second Amendment.

For one thing, this initiative would do nothing to stop criminals from acquiring ammunition, guns, or large-capacity magazines. But it would make it prohibitively difficult for responsible gun owners to obtain ammunition for sport and home defense.

As prosecutors, we would enthusiastically support any proposed law that promised to be a realistic tool against gun violence. But Prop. 63 is simply bad public policy. Its passage would have zero effect on criminals — other than to encourage them to commit more crimes. At the same time, it would criminalize the conduct of ordinary citizens.

Passage of Proposition 63, which now appears to be certain, will turn out to be a two-fer: 1) a further infringement of precious rights guaranteed by the Second Amendment to the citizens of California, and 2) a boost from obscurity to national prominence the highly popular former mayor of San Francisco and current radio host who has his eyes set on 2018 political opportunities.

ammunition Crime Democrat firearms National Rifle Association rights Second Amendment
This entry was posted on Tuesday, November 1st, 2016 at 6:15 am and is filed under Politics, Second Amendment. You can follow any responses to this entry through the RSS 2.0 feed. Both comments and pings are currently closed.
Many of the articles on Light from the Right first appeared on either The New American or the McAlvany Intelligence Advisor.