Americans Love Their Guns: All 660 Million of Them

This article was published by The McAlvany Intelligence Advisor on Friday, October 28, 2016: 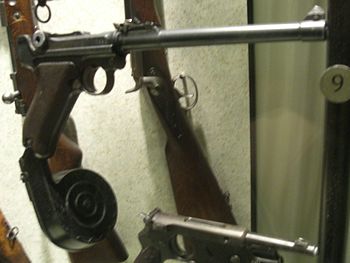 A Luger P08 pistol with long barrel and snail magazine. Taken at the National Firearms Museum.

“If you repeat a lie often enough, it becomes the truth” is attributed to Joseph Goebbels. Whether the mainstream media intends it or not, it certainly has an estimate of how many guns are owned by Americans:

This so annoyed the blogger at WeaponsMan, a former Special Forces soldier, that he invested hours in his search for the truth. He found it by perusing public websites, including that of the ATF, and found the answer: between 412 and 660 million. His analysis is available under Sources below.

Even that number is suspect, however. Not every serial number of every firearm made in America or imported from abroad is in a government database. That database is only 15 years old. Americans have loved guns for centuries, long before the gun grabbers considered using government as a tool of oppression. Missing also are firearms brought home from foreign wars by veterans long deceased. Thousands, perhaps many more, are being printed daily by home entrepreneurs using ever-cheaper 3D printers. And this doesn’t include machinists working in their garages or basements turning out firearms on lathes and milling machines.

One thing is certain: with ownership comes responsibility and increased awareness of threats to their possession. On Wednesday, Gallup released a poll that surprised them but hardly anyone else who has been paying attention. When asked “Are you for or against a law which would make it illegal to manufacture, sell, or possess semi-automatic guns known as assault rifles?” more than three out of every five of the 1,017 adults over age 18 living in every state in the union said “against.” In the year 2000 that number was two out of five, which means there has been a shift in opinion of an astonishing 22 percent in just the past 16 years.

It gets better (or worse, if one is a gun-grabber): Assault weapon bans are opposed by those who don’t even own a gun! And even better: Democrats’ support for assault weapons bans also dropped, from 63 percent in 2000 to 50 percent. As the author of the Gallup report, Art Swift, noted:

It is striking – and unusual – that fewer Democrats than ever support an assault weapons ban, since the Democratic Party has been instrumental in pushing for stricter gun laws.

Comforting for those watching the election polls should be this: In 2000, Independents generally lined up with Democrats, with 63 percent of them assenting to assault weapons bans. Today that number has been cut in half, to 31 percent. Extrapolating into possible voting decisions next month, those Independents may be enough to carry the day for Trump.

Gallup is not immune to the media influence, but is (or appears to be) honest enough not to let that influence change the outcome of their poll. Instead it grieved over the “paradox”:

Perhaps paradoxically, opposition toward a ban has increased against a backdrop of multiple mass shootings and terrorist attacks in which the perpetrators used assault rifles. These guns were used in high-profile incidents, including the terrorist attacks in San Bernardino, California, and Orlando, and the mass shootings in Aurora, Colorado, and Newtown, Connecticut.

That “paradox” was easily explained by Sean Davis, the co-editor at The Federalist, who declared that “Americans understand that terrorists want to murder us, and that our laws are no obstacle to their blood lust. They will use planes, or bombs, or trucks, or knives, or box cutters, or guns … strict gun control laws in cities like Chicago and Washington, D.C. have done nothing to prevent sky-high murder rates in those cities year after year.”

Pastor Chuck Baldwin, the Constitution Party’s presidential candidate in 2008, was even clearer about the reason behind the change in heart revealed by Gallup:

To take away the citizen’s right to bear a semi-automatic rifle is to, in effect, completely disarm him….

The only reason that would-be tyrants in the US government have been kept at bay is because of an American citizenry fully armed with semi-automatic rifles.

When speaking recently with the owner of a local gun shop, this writer learned that people are buying guns whether they can afford them or not. Most are using the remaining available credit on their credit cards to buy firearms and ammunition. He said, “They wouldn’t be doing that unless they could see what’s coming.”

With that kind of decision and commitment, Americans are waking up to the threats to their liberties, whether from foreign terrorists or domestic gun grabbers. Jefferson was right when he gave the best reason of all for the change in heart reported by Gallup:

The strongest reason for the people to retain the right to keep and bear arms is, as a last resort, to protect themselves against tyranny in government.

ammunition assault weapons attack Chuck Baldwin Constitution Democrat firearms Gun Control guns Mainstream Media media Polls terrorists threat truth
This entry was posted on Saturday, October 29th, 2016 at 5:01 am and is filed under History, Second Amendment. You can follow any responses to this entry through the RSS 2.0 feed. Both comments and pings are currently closed.
Many of the articles on Light from the Right first appeared on either The New American or the McAlvany Intelligence Advisor.