Mexico’s Violence Teaches the Value of the Second Amendment

This article was published by The McAlvany Intelligence Advisor on Friday, October 14, 2016: 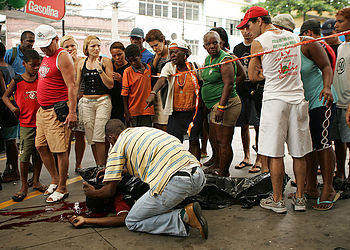 On Monday, Mexico’s National Survey on Victimization and Perception of Public Security reported that three out of every four Mexican citizens don’t feel safe living there, thanks to the violent crime wracking the country. It went on to calculate the ratio of violent crimes per 100,000 population: an astounding 35,497! Translation: more than one out of three citizens is a victim of a violent crime, every year! Compare that to the US where the ratio is 369 per 100,000.

The police are of little help, either through corruption or incompetence. “Cifra negra” – unreported crime – is so widespread that the published number is undoubtedly too low. Thirty-three percent of those polled consider reporting a crime to local police as “a waste of time,” while one in every six “distrust the authorities” to do anything about it if they did.

Reducing runaway crime was a major political platform when Mexico’s current president, Enrique Peña Nieto, was running his campaign in 2011. When he took office his approval rating, according to the newspaper Reforma, was 50 percent. Since then, thanks to his inability to rein in the violence (and various charges of corruption in his administration), his approval rating is now just 23 percent, the lowest since Reforma started keeping tracking in 1995.

On Tuesday a bold senator from the National Action Party (PAN), Jorge Luis, Preciado, expressed his support for amending his country’s constitution to expand citizens’ right to own firearms. Said Preciado:

The Mexican Constitution already allows citizens to possess certain firearms inside their homes, and we simply want to extend that right to other places….

We are in the midst of a very complex situation and we are simply arguing that if the State cannot protect us, then it should at least allow us to defend ourselves.

“At least”? That’s the very core of Americanism: the right to life expressed in the Declaration of Independence presumes the right to defend it (the Supreme Court’s decision in Roe v. Wadenotwithstanding). That’s the difference between the US and its neighbor to the south: a culture here that still defends life and has the Second Amendment in place to enforce it, compared to a culture there which places much less value on it.

Preciado’s attempt is no doubt well-intentioned, but likely to gain little traction. The amendment would assure that every weapon a private citizen buys is purchased through the country’s National Defense Ministry. The purchase only takes place after he has complied with “strict and thorough background checks, including physical and psychological exams.” His proposed amendment would, in addition, require that he provide fingerprints and DNA records for the government’s database.

In addition, political opposition to the amendment comes from both ends of the political spectrum. Even if by some miracle it was added to the constitution, and by another miracle some law-abiding citizens would be allowed to purchase firearms for use outside their home, the impact on violent crime would likely approach nil. After all, the drug cartels are able to purchase all the illegal weapons they want, presenting an overwhelming challenge to those who would resist. As of 2009 those cartels were responsible for the deaths of 60,000 citizens, with another 20,000 missing and unaccounted for. More recently, the violent murder in September of Maria Villar, the niece of the president of the Spanish Football Federation, was headline news all across the country. On September 30 a Canadian artist, Barbara McClatchie, was murdered on her way home and her body dumped beside the road in the Yucatan.

The Catholic Church has suffered grievous losses as well, with 31 priests having been murdered in Mexico since 2006, 15 of them just in the last four years.

To see the value of the Second Amendment, just look south of the border. But don’t go there: just look!

Cartel Constitution Corruption Crime Declaration of Independence firearms Second Amendment violence
This entry was posted on Saturday, October 15th, 2016 at 5:27 am and is filed under Crime, Second Amendment. You can follow any responses to this entry through the RSS 2.0 feed. Both comments and pings are currently closed.
Many of the articles on Light from the Right first appeared on either The New American or the McAlvany Intelligence Advisor.