This article appeared online at TheNewAmerican.com on Tuesday, October 4, 2016: 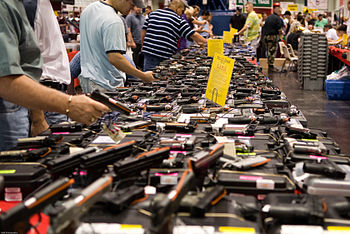 As the Wall Street Journal reported, Immigration and Customs Enforcement (ICE) has has a program in place since 2010 to use license-plate readers to read the license plates of gun show attendees in southern California. The theory was simple: compare those scans to cars crossing the border into Mexico and — voila! — ICE could find potential gun runners who warranted further investigation.

But the ICE didn’t do the scanning. It “persuaded” (the Journal’s word) local police to perform the scans. That is the predictable result of vastly improved surveillance technology coupled with much lower costs. This, combined with efforts to turn local police departments into branches of the federal government, funded with billions of taxpayer monies, and the surveillance state is now in full swing across the land.

In 2012, the Journal published a 10-page warning about the surveillance state being enhanced through the use of license-plate scanners. It showed that, with this final piece of the surveillance puzzle put into place, an individual’s private life can be built, observed, tracked, followed, and, when determined necessary, intercepted by federal agencies. Wrote the Journal:

Cellphone-location data, online searches, credit-card purchases, social-network comments and more are gathered, mixed-and-matched, and [then] stored in vast databases…. Data about a typical American is collected in more than 20 different ways during everyday activities [including] “vehicles parked at addiction-counseling meetings, doctors’ offices, health clinics, or even staging areas for political protests.”

In 2013 the ACLU raised further the level of concern about arbitrary all-encompassing surveillance of Americans in its monumental study “You Are Being Tracked.” The study stated that license-plate trackers provide that final piece of the puzzle: “These systems are configured to store the photograph, the license plate number, and the date, time, and location where all vehicles are seen — not just the data of vehicles that generate ‘hits’…. [This additional information] allows law enforcement agents to assemble the individual puzzle pieces of where we have been over time into a single, high-resolution image of our lives.”

The study raised the question of “institutional abuse” of such data stored in vast databases that may be easily accessed not only by local law enforcement but also federal agencies, private investigators, insurance companies, university researchers, toll operators, and even journalists.

The temptation to surveil everyone in Riverside County, California, became too great and, in 2007, its Sheriff’s Department began using automated license-plate scanners. Said Sergeant Lisa McConnell, “The database is available to any of our officers in the furtherance of their professional duties.” And the records will be kept “indefinitely.”

The technology involved is elegantly simple: a license plate that can be identified in the photo is converted into machine-readable text which is then automatically compared to a pre-existing “hot list” of potential suspects. If there is a “hit,” law enforcement is notified.

But this technology allows for far more than just obtaining “hits.” As the U.S. Court of Appeals for the D.C. Circuit wrote in 2010 in United States v. Maynard, “A person who knows all of another’s travels can deduce whether he is a weekly church goer, a heavy drinker, a regular at the gym, an unfaithful husband, an outpatient receiving medical treatment, an associate of particular individuals or political groups — and not just one such fact about a person, but all such facts.”

The ACLU posited this scenario where the system could lead to very unhappy consequences for innocents caught in the web: “A citizen group organizes a protest calling for an end to the ‘war on terror.’ Many people show up. The police department uses a license plate reader-equipped police cruiser to scan the license plates of all who park in a nearby parking lot. They then investigate these individuals, showing up at their places of employment to ask questions about their backgrounds.”

Or this: “A DEA risk-analysis system alerts the police in Utah that the same car is traveling between Salt Lake City and Nogales, Arizona on a monthly basis. The next night, a divorced father visiting his child in Arizona receives a knock on the door from federal agents to interrogate him about his travel. Drug dealer, or dedicated dad? Data-mining systems can’t tell the difference.”

Or this: “An affluent suburbanite has a friend who lives in a poor neighborhood where drugs are often sold. The police get an alert that he is a regular visitor to this neighborhood, and he gets pulled over on a pretext [‘driving erratically’] several times so they can search his car, and a police ‘intelligence squad’ opens a file on him.”

But what about using this information to follow law-abiding gun owners exercising their Second Amendment-protected rights? In late June, MSNBC correspondent Aaron McCarthy interviewed an agent with the National Security Agency, one William Hunsaker, and questioned him about that agency’s hyper-focus on those gun owners:

McCarthy: Mr. Hunsaker, if I were to make the statement: most gun owners within the United States receive more aggressive surveillance from the government than non-gun owners, would that statement be true or false?

Hunsaker: That would be a true statement. The NSA has been collecting and compiling records of gun ownership for the purpose of protective surveillance since 1999.

Hunsaker: It’s nothing more than collecting and utilizing data. It’s not always a popular stance. However, the truth is that individuals with guns inflict harm on other individuals. We understand that not all individuals who own firearms have intentions to inflict malice on others. However, many times we have the ability to identify those who do. Additionally, we are able to gain insights into gun owners’ mental stability through intensive and strategic surveillance.

Hunsaker: Have you applied for or purchased a firearm in the United States between the years of 1999 and 2016? If so, then you are on the list.

A gun owner parking his car near a gun show will merely add to the suspicion by federal agencies that he is up to no good. His data file will remain open indefinitely, waiting for the time when government agencies decide that mere ownership of firearms constitutes a threat to the “general public,” or, more precisely, a threat to the government.

ACLU consequences Federal Government firearms guns innocents intent NSA private rights Second Amendment surveillance Technology threat
This entry was posted on Wednesday, October 5th, 2016 at 4:46 am and is filed under Crime, Fourth Amendment. You can follow any responses to this entry through the RSS 2.0 feed. Both comments and pings are currently closed.
Many of the articles on Light from the Right first appeared on either The New American or the McAlvany Intelligence Advisor.