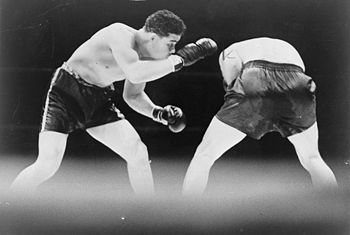 The parallels between last night’s so-called debate and the first boxing match between Joe Louis and Max Schmeling in 1935 are worth mentioning. In that first match Louis, the reigning world heavyweight champion, failed to prepare for the match and instead of training, he played golf. Schmeling, on the other hand, age 30 (considered over the hill) trained intensively, encouraged by Hitler and the Nazis to show Aryan superiority over the negro. The match lasted 12 rounds and ended when Schmeling knocked Louis out.

The rematch took place three years later, with vastly different results. Louis, not only for national pride but for “personal reasons”, trained hard. When the two met in Yankee Stadium before a crowd of 70,000, Louis pounded Schmeling into submission in the first round, with Schmeling’s trainer throwing in the towel. Schmeling was only able to land two punches before he went down.

It is this writer’s hope that Trump has learned the same lesson. He hopes that Trump learned that he is dealing with a trained professional, not with some weak-kneed bitter old lady with health problems. He missed many opportunities to put Hillary away last night, through lack of preparation. If Trump has learned that he is dealing with a political professional, the next debate just might turn out differently – perhaps much differently.

This entry was posted on Tuesday, September 27th, 2016 at 4:49 am and is filed under History. You can follow any responses to this entry through the RSS 2.0 feed. Both comments and pings are currently closed.
Many of the articles on Light from the Right first appeared on either The New American or the McAlvany Intelligence Advisor.