Was CIA Director Brennan’s 1976 Vote for a Communist Just a Youthful Indiscretion? 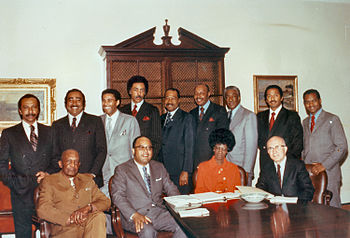 During a panel discussion Thursday at the Congressional Black Caucus Foundation’s annual conference, CIA Director John Brennan was trying to make the point that just because an individual has an “activist” background, that wouldn’t, or shouldn’t, keep him from working for the federal government in sensitive positions. After all, he said, the CIA hired him even after he admitted voting for a communist in the 1976 presidential elections.

In 1980, Brennan was trying to obtain a top security clearance for the Central Intelligence Agency, and part of the process involved taking a lie detector test. He was asked: “Have you ever worked with or for a group that was dedicated to overthrowing the US?” Brennan explained to the panel what happened next:

I froze. This was back in 1980, and I thought back to a previous election [1976] where I voted, and I voted for the Communist Party Candidate [Gus Hall]….

I said I was neither Democratic or Republican, but it was my way, as I was going to college, of signaling my unhappiness with the “system,” and the need for “change.”

I said I’m not a member of the Communist Party, so the polygrapher looked at me and said, “OK,” and when I was finished with the polygraph, I left and said [to myself], “Well, I’m s—–d.”

Brennan wasn’t “s—–d” after all. He was admitted to the CIA, which proved his point as he told the Black Caucus:

So if, back in 1980, John Brennan was allowed to say, “I voted for the Communist Party with Gus Hall — and still go through, rest assured that your rights and expressions and your freedom of speech as Americans is something that’s not going to be disqualifying of you as you pursue a career in government.

Was this, as Brennan claimed, just a youthful indiscretion? Or have his actions during his 25 years with the CIA, and now, since March of 2013, as its director, shown a deeper, more disturbing side to his politics?

As historian Ron Radosh points out, “The CPUSA at that time was dedicated to gaining support for Soviet foreign policy, with the intent of defeating the United States in the Cold War.… Moscow regularly gave Hall thousands of dollars to enable the Communists in America to carry on their work.”

In his graduate thesis which earned him an M.A. in government from the University of Texas in Austin, Brennan denied the existence of “absolute human rights” and argued that a government — this time the Egyptian government — could censor certain inflammatory speech:

Since the press can play such an influential role in determining the perceptions of the masses, I am in favor of some degree of government censorship. Inflammatory articles can provoke mass opposition and possible violence, especially in developing political systems.

In other words, the guarantees in the Bill of Rights, specifically those related to the First Amendment, aren’t absolute, according to Brennan, and may be, in certain circumstances, abrogated or even ignored altogether.

Let’s overlook Brennan’s role in creating false talking points for U.S. Ambassador to the UN Susan Rice (who claimed that the Benghazi attack, thanks to input from Brennan, was based on “the best information at present”) was not premeditated, but instead was a “spontaneous reaction” to “a hateful and offensive video that was widely disseminated through the Arab and Muslim world.”

Let’s ignore Brennan’s assurance that charges brought by California Senator Dianne Feinstein in March 2014 that the CIA had hacked into computers belonging to some of her staffers were false, even though they were later proven to be true.

Let’s look instead, albeit briefly, into Brennan’s “disposition matrix,” which he personally designed to allow the president of the United States to kill Americans by overriding and ignoring constitutional guarantees provided in that Bill of Rights that he so easily dismissed early on. It was Brennan who not only codified the procedure by which “targeted” killings of Americans could take place, but did so in a way that made it a permanent part of American “foreign policy” for future administrations. The “streamlined” system that now exists requires input from several different federal agencies, providing information on suspects that allows those involved to cull, sift, sort, and winnow out those who don’t meet the shifting standards of potential danger, and then submit the final list to the president for his approval.

Brennan revealed his mindset in August 2012 when describing the system: “I tend to do what I think is right. But I find much more comfort, I guess, in the views and values of the president.”

In February 2013, NBC received a white paper from the Justice Department describing just how those decisions are made in order to justify them, dressed up with just enough legal jargon to sound reasonable. For instance, that white paper says that the president can kill an American citizen if “an informed, high-level official” of the federal government — presumably John Brennan — has unilaterally decided that the target poses “an imminent threat of violent attack against the United States” and if his capture is not otherwise feasible. The definition of “imminent” is flexible enough, holding that it is not necessary for a specific attack to actually be in process but only when the suspect/target is found to be “generally engaged” in terrorist activities aimed at the United States. It also asserts that courts should not be involved as it would only slow things down: “Judicial enforcement of such orders would require the court to supervise inherently predictive judgments by the president and his national security advisors as to when and how to use force against a member of an enemy force against which Congress has authorized the use of force.”

When that white paper was released back in 2013, Hina Shamsi, director of the ACLU’s National Security Project, was appalled, stating:

[The paper is] a profoundly disturbing document.… It’s hard to believe that it was produced in a democracy [sic] built on a system of checks and balances. It summarizes in cold [quasi-] legal terms a stunning overreach of executive authority: the claimed power to declare Americans a threat and [to] kill them far from a recognized battlefield and without any judicial involvement.

The paper delayed only briefly Brennan’s appointment as head of the CIA. In January 2013, after reviewing the document, the ACLU called for the Senate to delay its deliberation of the appointment, which it did, for two months. On March 5 the Senate Intelligence Committee approved Brennan’s nomination by a vote of 12 to 3, which provoked a strong reaction, and a memorable filibuster, by Senator Rand Paul, who stated:

It goes against everything we fundamentally believe in our country.

Though the White House admitted that it had no such authority, Brennan was confirmed by the Senate by a vote of 63 to 34.

Based on the evidence, it’s clear that Brennan’s contempt for rights guaranteed under the Constitution remains in place 40 years later.

ACLU Bill of Rights communist Constitution Constitutional Federal Government First Amendment Foreign Policy guilt intent justice politics power Rand Paul rights terrorist threat violence
This entry was posted on Monday, September 26th, 2016 at 9:30 am and is filed under Constitution, Crime. You can follow any responses to this entry through the RSS 2.0 feed. Both comments and pings are currently closed.
Many of the articles on Light from the Right first appeared on either The New American or the McAlvany Intelligence Advisor.