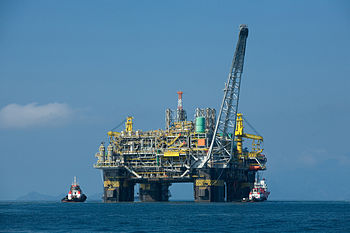 Brazil – The first 100% Brazilian oil platform, the P-51 will produce about 180 thousand barrels of oil and 6 million cubic meters of gas per day when operating at full load.

Two separate announcements on Monday from officials at Petrobras, Brazil’s state-owned oil company, reveal the massive damage it has suffered over the last 10 years. First was the news that it just successfully concluded the offloading of its precious gas pipeline unit for an estimated $5 billion. The company said this was just part of its determination to sell off about $20 billion of its assets over the next couple of years in order to pay down some of its $125 billion indebtedness.

The second announcement was even more revealing: Petrobras is cutting its capital investment in half, from the $159 billion it planned on spending to develop its recently discovered oil finds off the shores of Rio de Janeiro, to just $82 billion. Ten years ago the company announced plans to make capital investments of $45 billion a year. That number has been cut to just $16 billion.

The company is making its cuts based on predictions that the global price of crude oil will be $48 a barrel this year, will increase to $56 a barrel next year, $68 a barrel in 2018, and $71 a barrel in the out years. Altogether then, the company hopes to cut its debt-to-earnings ratio from a towering 5.3 times to a slightly more manageable 2.5 times. That estimate is also based on a strengthening of Brazil’s currency, the real, which some are questioning in light of the country’s increasing rate of inflation.

The ongoing scandal, called Operation Car Wash, is one of Brazil’s largest investigations. As Wikipedia noted, “The scheme consisted of companies bribing senior Petrobras officials and other public offices to get ‘overbilled’ contracts with the state oil company.” It forced Brazil’s president Dilma Rousseff from office, only to be replaced by her vice president, Michel Temer. The corruption has touched hundreds of high officials in government and in Petrobras, resulting in jail terms for many, with others in high places still under investigation. More than $3 billion in bribes have been uncovered so far, with Petrobras being forced to take write-offs approaching $20 billion as a result of the scandal.

Ten years ago Petrobras exuberantly anticipated that with the build-out of its new oil fields, its production by 2020 would approach five million barrels per day. With its current cuts in capital spending and the selling off of valuable assets, the company now estimates its production will be half that by 2020.

This is the inevitable aftermath of a corruption scandal involving, first of all, a state-owned and -operated oil company, which was vastly inefficient compared to a free market operation. Second, because of political influence and temptation, Petrobras was considered by many inside government and without as a gigantic piggy-bank to be raided at will. Third, collapsing oil prices turned the piggy bank upside down, resulting in massive investors’ losses approaching $250 billion and bond holders taking severe haircuts on the $70 billion they loaned the company during the early heady days. Finally, the credit ratings of both Brazil and Petrobras were reduced to junk.

Those massive oil finds are still there. The question remains open as to whether the new, smaller, leaner, and perhaps more efficient Petrobras will be able profitably to access them without succumbing once again to the temptation and pressure of politicians, company executives, and government officials to raid the company. Investors, putting hope over experience, have more than doubled the price of Petrobras preferred stock just since January.

Corruption cutting Free Market Oil Prices Scandal Spending
This entry was posted on Wednesday, September 21st, 2016 at 4:31 am and is filed under Economics, Energy. You can follow any responses to this entry through the RSS 2.0 feed. Both comments and pings are currently closed.
Many of the articles on Light from the Right first appeared on either The New American or the McAlvany Intelligence Advisor.