This article appeared online at TheNewAmerican.com on Thursday, September 15, 2016: 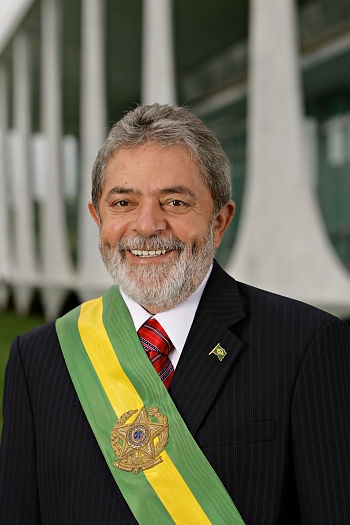 Luiz Inácio Lula da Silva, popularly known simply as Lula, was formally and publicly charged by federal prosecutor Deltan Dallagriol with heading up a massive money-laundering and political-kickback scheme dating back to at least 2005. Lula and his wife, Marisa Leticia, were charged in a public presentation Wednesday carried live on Brazil’s main news stations, with flow charts showing the network of politicians, corporate executives, and Petrobras employees being linked directly or indirectly to Lula.

Lula was the big boss of the Petrobras corruption scheme. Lula was on top of the power pyramid. Lula appointed several senior executives at Petrobras so that they could raise funds for political parties in the governing coalition….

Without Lula’s decision power, it would be impossible for this scheme to exist.

Costs to Petrobras and Brazilian taxpayers are in the billions, and the state-owned oil company has been forced to sell off assets, suspend dividend payments, and take losses estimated at nearly $20 billion.

Although the charges against Lula spring directly out of the two-year “Operation Car Wash” investigation, his scheme dates back to at least 2005 when it was discovered that then-President Lula was paying off congressional deputies $12,000 a month to buy their votes and keep his ruling Workers Party in power. That time the money came directly from the government. The Mensalao scandal, as it was called at the time, nearly toppled Lula’s regime.

In “Operation Car Wash” the funds came from the state-owned oil company, Petrobras.

In 2006 Petrobras announced the discovery of two massive oil fields in the Gulf of Mexico. Those fields were augmented by further discoveries in 2011. The Santos, Espirito Santo and Campos Basin discoveries were going to require billions in development costs. The company set aside more than $150 billion to build out those fields, and the temptation to sell those contracts became overwhelming.

Pay-to-play schemes involving Petrobras employees (many of them party hacks and political appointees who replaced oil company executives) and contractors began siphoning funds from over-priced contracts back to Lula’s party. The funds were so large that recipients couldn’t hide them in local banks without being detected, so they tried to launder money through the accounts of an electronic components manufacturer. When the owner uncovered the scheme, he called the police in 2008. Through plea bargains with those charged, the whole plan slowly began to be revealed. Initially, four large criminal rings were uncovered, followed by more discoveries soon thereafter. Some of the funds were moved offshore through a bank transfer agency located in a building operated by a car wash company, hence the name “Operation Car Wash.”

It was just a matter of time before the entire scheme was exposed. Hundreds of warrants were issued and dozens were jailed, including top executives of some of Brazil’s largest construction companies.

One example will suffice. Brazilian construction conglomerate Grupo OAS, in appreciation for all that Lula had done to “expedite” its numerous contracts with Petrobras, purchased and renovated a home for Lula and his wife, to the tune of more than a million dollars. When the link was discovered, Lula denied everything, claiming that he didn’t own the home and so couldn’t be guilty of accepting the gift.

For its part, OAS was forced to declare bankruptcy on nine of its units, claiming that court protection “was the best way found for the [company] to renegotiate its debts with creditors and suppliers” because its access to credit had ended due to the exposure of the payoff.

Lula is going to have his hands full. Not only is he facing these charges, he was just indicted by a court in Brasilia for obstruction of justice stemming from his involvement in trying to silence a Petrobras executive from testifying against him in the Petrobras scandal. And other charges are still to come, according to Marcos Troyjo, a former Brazilian diplomat. Said Troyjo:

That means [that] the Workers Party, which may have thought it would move comfortably into the opposition after Dilma [Rousseff’s] impeachment, will confront extreme challenges.

It’s certainly the beginning of the end to Lula’s presidential aspirations for 2018.

For Brazilians it may be the beginning. The first step in curing a cancer patient is to excise the cancer. Only then can the healing begin.

Bankruptcy cancer Corruption guilt Impeachment justice oil politician power Scandal schemes taxpayer
This entry was posted on Friday, September 16th, 2016 at 5:54 am and is filed under Crime, Politics. You can follow any responses to this entry through the RSS 2.0 feed. Both comments and pings are currently closed.
Many of the articles on Light from the Right first appeared on either The New American or the McAlvany Intelligence Advisor.