This article was published by The McAlvany Intelligence Advisor on Friday, September 9, 2016: 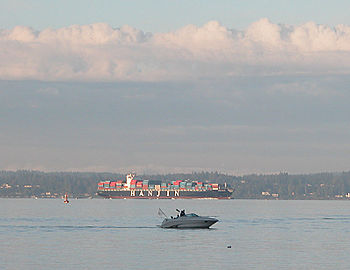 One of Hanjin’s container ships looking for a place to unload.

When the question about a tree falling in the forest is asked, it’s usually posed as a philosophical one: “If a tree falls in a forest and no one is around to hear it, does it make a sound?” The question is never asked: “What if someone is around who doesn’t want to hear it?”

That appears to explain the kept media’s deafness over the state of the global economy. Even when the Wall Street Journal reported on the bankruptcy of Hanjin Shipping, the world’s seventh largest container shipping company, not one word was spent on asking why. Instead it was all about how 90 of the company’s 200 ships are circling global ports, waiting for permission to offload some 500,000 shipping containers containing an estimated $14 billion worth of goods. Those offloading companies were wondering how they were going to be paid.

They have a right to be concerned, but that’s beside the point. Hanjin hasn’t had a profitable year since 2011 and has repeatedly had to go to the banks for financing their losses. When the banks finally said no earlier this week, Hanjin had no other option but to declare bankruptcy, turning those 90 ships into orphans without a home.

The real question not raised is why. Why did Hanjin go bankrupt? Is there something going on globally that tripped this wire? The other question: why is the media deaf, is another much deeper question.

In January Adam Hayes, a Chartered Financial Analyst writing for Investopedia, named many of the reasons the global economy was flat-lining, including:

The “European Situation” consisting of the bailing out of the PIIGS nations (Portugal, Ireland, Italy, Greece and Spain) repeatedly by the European Central Bank and the IMF;

The “Chinese Bubble” now imploding thanks to overbuilding of ghost cities and over capacity in basic industries like steel and cement, resulting a dramatic “official” slowing of China’s economy from double digits to 7% or, more likely, much lower;

The “Student Loan Problem” in the United States, where $1.2 trillion of those loans are hampering young people from otherwise engaging in economic activities such as marrying and buying homes and cars;

The “Central Banks problem” consisting of their inability to reduce interest rates further in the nonsensical Keynesian attempt to stimulate moribund economies around the world when interest rates are already at, or below, zero; and

A month later, Citigroup looked at the same data and came to the same conclusion: if global economic activity remains at the present level, it will qualify as a global recession, according to their internal definition.

In March the OECD reported that the global “outlook points to easing growth in the United Kingdom, the United States, Canada, and Japan, [while] similar signs are also emerging in Germany.” A closer look at the report revealed that only France, Italy, and India, of the 20 countries in the OECD, were showing any signs of positive economic life.

In July the Cass Freight Index (highly regarded as a leading economic indicator because it includes all domestic freight modes and is derived from $25 billion in freight transactions in North America) confirmed the slowdown, noting that it has been years in the making and starting, incidentally, with the first year that Hanjin posted a loss: 2011.

It’s unlikely that the Hanjin bankruptcy, by itself, will have any measurable impact on the American consumer. Samsung has about $40 million in refrigerators and other appliances, along with its Galaxy phones, sitting in those containers waiting to be offloaded. Retailers are moving Heaven and earth as this is being written to gain access to those half a million containers. Black Friday and Christmas holiday sales aren’t going to be impacted, according to observers, suggesting that Hanjin’s bankruptcy is just a “one-off” event.

It is not. It is more likely just the first olive out of the bottle: the others will come a little easier.

If a tree falls in the forest…

Signs of easing growth in the OECD area

Adam Hayes: 6 Factors That Point to Global Recession in 2016

Bankruptcy banks Black Friday bubble Economy global Keynesian Recession slowing
This entry was posted on Saturday, September 10th, 2016 at 5:21 am and is filed under Economics. You can follow any responses to this entry through the RSS 2.0 feed. Both comments and pings are currently closed.
Many of the articles on Light from the Right first appeared on either The New American or the McAlvany Intelligence Advisor.