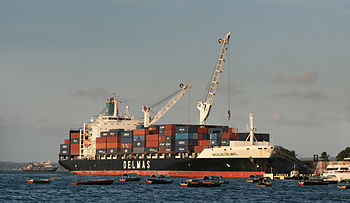 Concerns are mounting that the delay in offloading (retailers are scurrying to make other arrangements to get access to their goods in time for the holiday season) will impact Black Friday shopping and well into the Christmas season. Samsung, for example, has an estimated $40 million worth of refrigerators and other appliances, along with Galaxy smartphones and other “visual” products, waiting to be unloaded.

The offloading is being complicated by creditors seizing some of those ships as collateral for loans they’ve made to Hanjin over the years.

What’s surprising is that Hanjin’s bankruptcy has caught the national media by surprise. The Wall Street Journal published a major article on Hanjin’s difficulties on Wednesday, managing to say nothing about Hanjin being the first example of what is likely to be a series of similar bankruptcies occurring all across the international supply chain.

As Adam Hayes, a chartered financial analyst, noted back in January, there were a whole host of factors leading to a global recession, including:

The “European Situation” consisting of the bailing out of the PIIGS nations (Portugal, Ireland, Italy, Greece and Spain) repeatedly by the European Central Bank and the IMF;

The “Chinese Bubble” now imploding thanks to overbuilding of ghost cities, over capacity in basic industries like steel and cement, resulting in a dramatic “official” slowing of China’s economy from double digits to 7% or more likely, much lower;

The “Student Loan Problem” in the United States where $1.2 trillion of those loans are hampering young people from otherwise engaging in economic activities like marrying and buying homes and cars;

The “Central Banks’ problem” consisting of their inability to reduce interest rates further in the nonsensical Keynesian attempt to stimulate moribund economies around the world, when interest rates are already at, or below, zero; and

This was followed in February by Citigroup’s conclusion, looking at the available data, that global growth might have been as low as two percent year-over-year in the final quarter of 2015 which, if it remains at such depressed levels, would qualify as a global recession, according to Citigroup’s own definition.

Then, in March, the 20-member Organization of Economic Cooperation and Development (OECD) reported that the global “outlook points to easing growth in the United Kingdom, the United States, Canada and Japan [while] similar signs are also emerging in Germany.” A closer look at the report revealed that of the 20 countries in the OECD, only France, Italy, and India were showing any signs of economic life.

The July Cass Freight Index confirmed the slowing global economy as well, noting that the slowdown has been years in the making and coinciding, incidentally, with the start of the string of losses by Hanjin that finally sank the shipping company into bankruptcy last week.

Hanjin is likely to be the first of many such declarations as the global economy continues to shrink, along with those involved in the supply chain. As Warren Buffett famously said, “Only when the tide goes out do you discover who’s been swimming naked.” In April, Hanjin applied for more assistance from its creditors to keep itself afloat as the global economy continued shrinking. When the banks finally refused any more assistance last week, Hanjin admitted that it had been, financially speaking, swimming naked since at least 2011.

And Hanjin has not been swimming alone, as the media will likely be reporting in the months to come.

Bankruptcy Black Friday Central Bank Economy European Central Bank GDP global Great Recession Greece IMF Ireland Italy Keynesian media slowing Spain Warren Buffett
This entry was posted on Friday, September 9th, 2016 at 4:26 am and is filed under Economics. You can follow any responses to this entry through the RSS 2.0 feed. Both comments and pings are currently closed.
Many of the articles on Light from the Right first appeared on either The New American or the McAlvany Intelligence Advisor.