On Cue, the US Mainstream Media Claims Brazil’s New President as “Free Market”

This article was published by The McAlvany Intelligence Advisor on Friday, September 2nd, 2016: 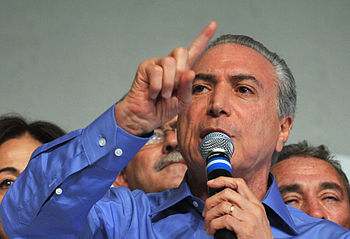 The mainstream media lavished unwarranted praise on Brazil’s new president, socialist Michel Temer, on Wednesday following his ascension to the post after Dilma Rousseff was ousted from it. The Wall Street Journal called it a “new start” for Brazil, while USA Today mischaracterized the crook as “a center-right” politician and “a pro-business, free-market advocate.” The New York Times gushed that Rousseff’s impeachment and Temer’s inauguration “puts a definitive end to 13 years of governing by the leftist [read: communist] Workers’ Party.”

This was followed up by promises from the new socialist-in-chief himself:

From today on, the expectations are much higher for [my new] government. I hope that, in these two years and four months [when his term ends in 2018], we do what we have declared: put Brazil back on track.

Brazil, one of the world’s largest and most impressive economies just a few years ago, was derailed by socialist and Keynesian policies implemented to stimulate the economy. It benefited from a period of rising commodity prices that covered up the massive social spending, resulting in global adulation over the “new” socialism that really could result in higher standards of living. Brazil was one of the BRIC countries poised to overtake the languishing “developed” countries such as the US as early as 2025.

That adulation is now silent, with Brazil facing problems that would stagger Godzilla:

An economy that has shrunk by more than 10 percent in just the last five years, with few expectations that it will get better;

Inflation that is currently running at one percent a month;

An approval rating just as low as those of Dilma Rousseff, just ousted from the presidency;

An administration rife with political cronies, three of whom have been forced to resign just since May on corruption charges (one of whom was named as Temer’s “anti-corruption” minister); and

A congress filled with at least 50 politicians implicated in the Operation Car Wash/Petrobras scandal.

Temer is hardly the one to take on such challenges. In the scant few months that he has been acting president, three members of his administration have already been forced to resign over corruption charges, one of them his “anti-corruption” minister! He bailed out Rio with a billion dollars as it struggled to complete its massive and wasteful Olympic Games’ infrastructure. He raised the salaries of his already high-paid government workers. And, to add confirmation to his intentions, he appointed Brazil’s former central bank head as his economic advisor.

So much for his creds as a “free-market advocate.”

The mainstream media never mention it, but Temer’s personal baggage is substantial as well, including suffering punishment for violating campaign finance laws in his 2014 election that keeps him from running for political office for eight years, charges that he channeled $400,000 in Petrobras kickbacks to one of his cronies running for mayor of Sao Paulo, and other charges that he paid off a construction executive some $300,000 in a bribe also related to the Petrobras scandal.

In addition, an electoral court is currently investigating Temer’s role in the 2014 election scandal that could result in new elections to replace him long before his term ends at the end of December 2018.

As head of the Brazilian Democratic Movement Party (PMDB), Temer has hardly distanced himself from his party’s ties to the socialist and communist parties with which PMDB has worked closely with since its beginning.

PMDB has a long and sordid record of vote-buying and corruption dating back to at least 2005 when the Mensalão scandal broke. It almost toppled the administration of Brazil’s President Lula da Silva when the investigation revealed that the PT Workers’ Party, included under the PMDB’s “big tent,” was buying off a number of legislators with payments of $12,000 every month in exchange for favorable votes.

One of Warren Buffett’s favorite expressions is: “You never know who’s swimming naked until the tide goes out.” Once Brazil’s tide went out, everything was exposed: Rousseff’s corruption, Temer’s complicity, the congress’s active participation in the Petrobras bribery scandal, the real state of the Brazilian economy, its massive underfunded pension plans, its hordes of overpaid and underperforming government workers, the inflation that is destroying the Real’s purchasing power by one percent a month, an unemployment rate that idles one of every ten Brazilians who want to work, and its massive debt now rated as junk by all three rating agencies.

communist Corruption Economy Free Market Impeachment Inflation Keynesian Mainstream Media politician Scandal Socialism Spending underfunded Warren Buffett
This entry was posted on Saturday, September 3rd, 2016 at 5:12 am and is filed under Crime, Politics. You can follow any responses to this entry through the RSS 2.0 feed. Both comments and pings are currently closed.
Many of the articles on Light from the Right first appeared on either The New American or the McAlvany Intelligence Advisor.