This article appeared online at TheNewAmerican.com on Monday, August 29, 2016: 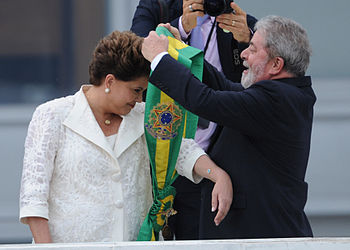 Brazil’s upper house will hear testimonies on Monday from eight of President Dilma Rousseff character witnesses in her last-ditch stand to stave off what appears to be inevitable: a senate vote impeaching her and removing her from office.

After the character witnesses speak, Rousseff will then follow with a 30-minute speech, touting her past successes, her experience, and her ties to the once-popular President Lula da Silva, who preceded her in office. She will also repeat her claims that she is innocent of all charges relating to budget manipulations in 2014 to help her reelection campaign, that the impeachment process amounts to nothing more than a coup, and that it was deliberately designed to distract attention away from senators being themselves investigated on corruption charges in the Operation Car Wash bribery scandal.

She may very well be right, but it won’t matter. Surveys of senators show that more than 54 of them (the minimum number required) will vote to remove her from office later this week.

Reed Johnson, writing in the Wall Street Journal earlier this month, said, “The descent of Brazil’s president was less about accounting sleight-of-hand and far more about a comatose economy, a colossal political scandal, partisan payback from her congressional adversaries, and an electorate that feels betrayed by [her] and disgusted with Brazil’s ruling elites.”

She won’t be helping herself any by calling on former President Lula da Silva to be one of her character references. Once touted as “a man with audacious ambitions to alter the balance of power among nations” and featured by Time magazine as one of “The 100 Most Influential People in the World” in 2010, his fall from grace has been nothing short of astounding. He is due to stand trial himself on bribery charges uncovered during the Operation Car Wash corruption investigation surrounding the state-owned oil company, Petrobras.

The charges came to light as the result of a plea bargain struck by one of Lula’s party officials, former senator Delcidio do Amaral, as he tried to ameliorate his own sentence for corruption. Lula, claimed Amaral, tried to ship a former Petrobras executive involved in the scandal out of the country on a private plane in order to keep him from testifying about the scandal.

In addition Rousseff tried to protect Lula from prosecution by naming him as her chief of staff, but the effort failed when the Supreme Court blocked her attempt.

When, as expected, Rousseff is formally ousted later this week, Brazil’s interim President Michel Temer will take over as president and serve the balance of her term into 2018. Temer, it is rumored, is already practicing his acceptance speech to be given before the Senate after the impeachment vote is completed.

Temer’s reputation has been sullied by corruption charges as well. He is barred from elected office over his own campaign finance violations, and just since May three members of his interim administration have been forced to resign under the corruption cloud that hangs over Brazil’s ruling class.

In June another plea bargain, this time from the former president of Brazil’s largest oil transportation company, has implicated Temer for his efforts to arrange for illegal campaign contributions (the man never learns) to a political ally running for mayor of Sao Paulo. The investigation into those charges continues, but no trial date has been set.

What has been revealed in all of this is that the corruption at the highest levels of Brazil’s government is wide, deep, and pervasive. As this author noted previously:

A crook [Rousseff] will be tried by [other] crooks trying to avoid (or at least delay) being investigated for their own crooked behavior.

In the meantime, the country will be run by another crook, packing his administration with even more crooks.

Corruption Economy Elite Impeachment power Scandal Senate Supreme Court violations
This entry was posted on Monday, August 29th, 2016 at 3:45 pm and is filed under Crime, Politics. You can follow any responses to this entry through the RSS 2.0 feed. Both comments and pings are currently closed.
Many of the articles on Light from the Right first appeared on either The New American or the McAlvany Intelligence Advisor.