This article appeared online at TheNewAmerican.com on Thursday, August 25, 2016: 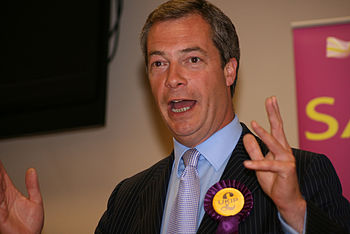 Nigel Farage, former head of the United Kingdom Independence Party (UKIP), addressed some 15,000 Trump supporters in Jackson, Mississippi, on Tuesday night to encourage them in their fight against the Washington political establishment. He drew parallels between the fight for Brexit, which he and his party strongly supported but which polls showed likely to lose right up until the day of the vote, and Trump’s fight:

Little people … people who have never voted in their lives [turned out to vote in Britain].… Anything is possible if enough decent people are prepared to stand up to the establishment….

We made June 23 [the day of the vote to exit the EU] our Independence Day when we smashed the establishment.

As he ended his 10-minute talk, Farage delighted the audience by saying, “If I was an American citizen, I wouldn’t vote for Hillary Clinton if you paid me!” The audience reacted with raucous approval, enjoying the reference to Clinton’s selling access to her State Department in exchange for cash payments by foreign interests to her foundation.

Trump said as Farage exited the podium: “I was very supportive of their right to [exit the EU] and take control of their own future, like exactly what we’re going to be voting for on November 8. November is our chance to redeclare American independence.”

Just before going on stage to address Trump’s supporters, Farage, in a radio interview, compared the Washington, D.C., establishment to the European Commission, saying that the parallels between Brexit and Trump’s campaign were “uncanny”: “The circumstances, the similarities, the parallels, between the people who voted for Brexit and the people who could beat Clinton in a few weeks’ time here in American are uncanny.”

To members of the mainstream media covering the event, however, the parallels were confusing, “baffling,” and “unexpected.” They appeared so steeped in statist ideology and dreams of a world run by the United Nations that they seemed unable to grasp the simple concept that people want to be free to work out their own destinies without interference by overweening governments, whether they be local, regional, national or global. Nick Corasaniti, writing in the New York Times, said that the presence of a foreign politician was “unexpected,” especially since Trump’s main meme is “America First.” Holly Bailey, covering the event for Yahoo.com, called the gathering “an unusual and somewhat surreal rally” and adding that the audience “appeared somewhat baffled” at Farage’s appearance.

Though tie-ins between Brexit and the Trump campaign may be baffling to left-wing journalists, the quest for independence from the Washington establishment and all of its decades-long efforts to entangle, entwine, and eventually subvert the American Republic into a one-world government certainly has been clear to Americanists such as Sarah Palin and Ron Paul. The day after the Brexit vote, Palin wrote:

The Brexit referendum is akin to our own Declaration of Independence. May that refreshed spirit of sovereignty spread over the pond to America’s shores!

Congratulations, smart Brits! Good on you for ignoring all the fear mongering from special interest globalists who tend to aim for that apocalyptic One World Government that dissolves a nation’s self-determination and sovereignty.

Getting out of NATO would be a good first move. Likewise, the US would do well to exit the various phony “free trade” agreements….

The act of exiting is liberating. We should make a longer list of those things we would like to get out of.

I am only getting started.

The John Birch Society, the parent organization to The New American, certainly agrees with climbing from beneath layers of government, especially unaccountable government. Its campaign to “Get US Out of the United Nations” started 50 years ago. As Alex Newman, writing for The New American following the Brexit, wrote:

The Congress should completely de-fund the UN as a [first] measure. Without action, the increasingly lawless UN (and the establishment behind it) will continue seeking to further empower themselves at American expense — trampling on liberty and sovereignty in the process.…

As the British have shown the world, even the full weight of the establishment can be successfully opposed by people demanding their independence back.

While members of the mainstream media may be confused and unable to grasp the concept of the restoration of liberty, Trump’s message is increasingly clear to millions of voters: exiting the establishment is the first step to exiting their plans for a New World Order.

Declaration of Independence Establishment Hillary Clinton ideology John Birch Society Liberty Mainstream Media New World Order politician Ron Paul Sarah Palin Sovereignty United Nations
This entry was posted on Friday, August 26th, 2016 at 5:34 am and is filed under Politics. You can follow any responses to this entry through the RSS 2.0 feed. Both comments and pings are currently closed.
Many of the articles on Light from the Right first appeared on either The New American or the McAlvany Intelligence Advisor.