Venezuelans Pour Into Colombia to Buy Food; Staples Not Available at Home

This article appeared online at TheNewAmerican.com on Monday, August 15, 2016: 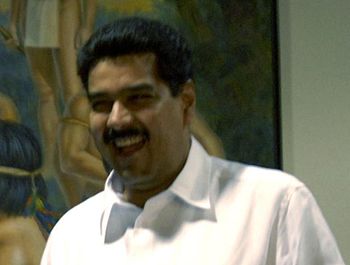 Marisol Sayago, a 65-year-old pensioner living in San Cristobal, Venezuela, traveled 40 miles on Saturday to buy 15 rolls of toilet paper. Crossing the border into Colombia, she did what shopping she could on her limited pension check in shops in Cucuta, saying, “It’s not economical, but what else can I do? Over there [pointing back across the bridge to Venezuela] you can’t find anything.”

Sayago was joined by an estimated 54,000 other Venezuelans suffering under the socialist regime of her country’s Marxist president, Nicolas Maduro (shown).

Maduro closed the border with Colombia last August, claiming that smugglers were taking advantage of Venezuela’s government-subsidized gasoline by transporting it into Colombia and selling it at a profit. Said Maduro at the time: “From Colombia all of the poverty and misery is coming over.” He opened the border briefly in July and then announced that the border would remain open permanently starting on Saturday.

One of the estimated 120,000 Venezuelans who rushed over the bridge to Colombia in July was Rosalba Duarte, a nurse from nearby Capacho. She joined the line at the border at 3 a.m. She told a Bloomberg reporter covering the event: “To get a kilo of rice [in Venezuela] you have to queue for six to eight hours, exposing yourself to mistreatment, people pushing, jumping the line. Then when you get to the front they close the store and say that everything’s sold out.”

Profit is an obscenity in Maduro’s worldview: Everything must be controlled by the central government. Accordingly he recently announced the creation of his Great Sovereign Supply Mission giving control of food and distribution to his defense minister, Vladimir Padrino Lopez. When a government controls the people’s food supply, it controls the people. When an escape hatch is opened, however, briefly, those people see the opportunity and seize it.

The vast majority of Venezuela’s 30 million people don’t have the opportunity to escape the country to avoid price controls and, consequently, are forced to suffer the consequences of what Maduro calls “Chavismo” in honor of the country’s previous dictator, Marxist Hugo Chavez, who installed controls over nearly aspect of the country’s once-flourishing economy.

Price controls have successfully removed essential foodstuffs and everyday items from the shelves. Citizens line up for hours to purchase whatever may be left in grocery stores, and police break up the riots that occur almost daily with tear gas. With government deficits growing as the price of crude oil has dropped — the country has more proven reserves than any other country in the world — Maduro covered them with paper money, causing inflation to skyrocket. The International Monetary Fund originally estimated that inflation in Venezuela in 2016 would top 480 percent, but just revised its estimate to 700 percent.

This inflation of the currency makes the Bolivar increasingly worthless. Some Venezuelans pouring into Colombia brought packets of paper money to exchange them for what they could get in Colombian currency. Others brought silverware, gold earrings, necklaces, and other valuables to trade for their life’s essentials.

One of those not able to make the trek into Colombia left her home in Caracas at 3 a.m. on Saturday in order to get in front of the line at a local market that was selling diapers. She had to carry her four-month-old child with her to prove to the store manager that she was going to use them rather than sell them on the black market. She told Jose Miguel Vivanco, the local director of Human Rights Watch, that things are so bad that “if you have breakfast, you don’t have lunch. If you get lunch, you don’t have dinner.”

Not just people are starving in Venezuela. At least 50 animals at the Caricuao Zoo in Caracas have died of starvation, according to a director of the country’s state parks agency overseeing it. Pigs, tapirs, rabbits, and birds went for weeks without food before dying, while those remaining are suffering severe malnutrition. Race horses at a nearby race track are being slaughtered and fed to the zoo’s big cats, while elephants are being fed tropical fruit instead of their usual diet of hay.

As the decreasing purchasing power of the bolivar continues to impoverish the people, it is also causing importers of meat, fish, sugar, and bread to cut the country off. Data from Panjiva, a global trade analytics firm, shows that bread imports have dropped by 94 percent over the last year, while meat imports have dropped by 63 percent. Chris Rogers, a Panjiva research analyst, said it’s not political, but economic: “Brazilians aren’t willing to sell meat to Venezuela. It’s not a political thing. The Venezuelans don’t have the money.”

Schlumberger, the oil field services provider, is also cutting back on serving Venezuela’s state-owned oil and gas company, PDVSA, because it is owed so much in unpaid bills. Maduro has replaced most of the company’s oil experts with his own political cronies, much as he has packed the Supreme Court to protect himself from political repercussions of his socialist tyranny.

The court has denied efforts by the country’s legislature to right the sinking ship while Maduro’s vote-counting mechanism — CNE, the country’s electoral council — has stalled the recall referendum sufficiently to prevent Maduro’s recall before regular elections in January.

Maduro has blamed his country’s woes on “right-wing” terrorists and foreign intervention and has ordered his pack of dogs called SEVIN, the state’s security police to arrest, torture, and “disappear” protesters.

In true socialist fashion, Maduro announced last month that the state’s “solution” to food shortages is to put Venezuelans back on the farm for at least 60 days or longer “if circumstances merit.” Maduro officially decreed that Venezuelans will be forced to work on farms to supply food. Those Venezuelans who are conscripted would be paid their regular wages by the government, and they would not be able to be fired by their regular employer. Maduro hasn’t followed through on implementing this decree yet.

The opening of the border between Venezuela and Colombia illustrates in microcosm two essentials about socialism: When fully implemented, it fails to allow people the freedom and ability to feed themselves. And it also shows what is needed to rectify the continuing horror unfolding in Venezuela: Open the borders, open the markets, remove price controls, restrain the police, and put the government back to its proper role of enforcing the rule of law and contracts and supporting the private ownership of property. When given the freedom to do so, people will find a way to feed themselves. It’s when government force shuts down the free market that people begin to starve.

consequences Free Market Paper Money Price Controls Socialism
This entry was posted on Tuesday, August 16th, 2016 at 5:40 am and is filed under Economics, Politics. You can follow any responses to this entry through the RSS 2.0 feed. Both comments and pings are currently closed.
Many of the articles on Light from the Right first appeared on either The New American or the McAlvany Intelligence Advisor.