This article appeared online at TheNewAmerican.com on Friday, August 12, 2016: 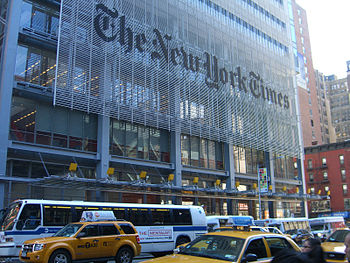 The unofficial mouthpiece of the left

But I tell you what, that will be a horrible day. If Hillary gets to put her judges in, right now we’re tied.

Ever alert to an opportunity to twist, spin, or otherwise misinterpret to its advantage, the New York Times within hours had a five-page article providing its interpretation: Trump threatened Clinton with violence. Here’s the Times: “Donald J. Trump appeared to raise the possibility that gun rights supporters could take matters into their own hands if Hillary Clinton is elected president and appoints judges who favor stricter gun control measures.”

Times writers Nick Corasaniti and Maggie Haberman rapidly collected collaborative interpretations from other liberals, thus “proving” that their interpretation of Trump’s remarks was correct. There was Bernice King, daughter of Martin Luther King, Jr., calling Trump’s words “distasteful, disturbing, dangerous,” a remarkable exercise in alliteration. They elicited similar responses from Clinton’s running mate, Tim Kaine: “[Trump’s words provide] a window into the soul of a person who is just temperamentally not suited to the task.”

Dan Gross, head of the anti-gun Brady Campaign, obliged, saying that Trump’s statement was “repulsive — literally using the Second Amendment as cover to encourage people to kill someone with whom they disagree.”

Elizabeth Warren fell in line, writing on Twitter: “[Trump] makes death threats because he’s a pathetic coward who can’t handle the fact that he’s losing to a girl.”

CNN echoed the mantra posited by the Times, saying that Trump’s comments “set off a fierce new controversy Tuesday with remarks about the right to bear arms that were interpreted by many as a threat of violence against Hillary Clinton.” Michael Harden, former head of the CIA, upped the ante: “If someone else had said that … he’d be in the back of a police wagon now with the Secret Service questioning him.”

The reality, of course, is much different, but the message was delivered and repeated ad nauseam: Trump is not fit to be president. Vote for Hillary.

Corey Lewandowski, Trump’s former campaign manager, said the candidate wanted to encourage gun rights people to vote for him instead of Hillary, adding “This was a joke — he wasn’t inciting violence.” Former New York City Mayor Rudy Giuliani said the media was deliberately misconstruing his words: “What he intended is very, very simple: that [gun owners] should vote against her. He had no idea that anybody would interpret his words that way. It was obvious to all of us what he meant.”

Chauncey Devega wasn’t buying any of these explanations. Writing for the far-left Salon magazine, he went over the top: “Despite efforts by his minions to deflect and spin Trump’s comments to some other meaning, his intent was clear: Hillary Clinton should be targeted for gun violence if she dares to nominate judges who would properly interpret the 2nd Amendment of the United States Constitution.”

When Trump himself was pressed on the matter, he said that gun rights supporters make up “a political movement. This is a strong political movement, the Second Amendment. And there can be no other interpretation. Even reporters have told me. I mean, give me a break.”

A break is the very last thing the kept media intend to give Trump. Instead they will seek every opportunity, every unintentional slip of tongue, every comment that can be twisted, to denigrate the candidate who threatens their world view. This is a tactic in deception that Trump is learning about the hard way, but one that has been used for years by enemies of the American Republic. In “A Message from the Author,” John Birch Society CEO Arthur Thompson, author of To the Victor go the Myths and Monuments just published by the American Opinion Foundation, said: “The forces at play two hundred years ago are the same that are involved today. We attempt to show this throughout the narrative and how the same tactics are in use today.”

Constitution danger Donald Trump Gun Control Hillary Clinton John Birch Society liberals media myths reality Republican rights Rudy Giuliani Second Amendment threat violence War
This entry was posted on Friday, August 12th, 2016 at 9:03 am and is filed under Politics, Second Amendment. You can follow any responses to this entry through the RSS 2.0 feed. Both comments and pings are currently closed.
Many of the articles on Light from the Right first appeared on either The New American or the McAlvany Intelligence Advisor.