This article appeared online at TheNewAmerican.com on Thursday, August 11, 2016: 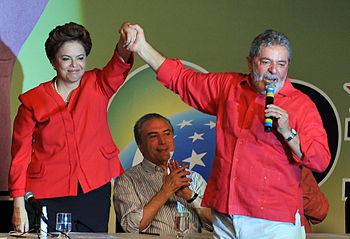 Rousseff and Lula before they were exposed as crooks

In the early hours of Wednesday morning, Brazil’s upper house, following 16 hours of speeches and rancorous debate, voted 59-21 to begin the impeachment trial of the country’s president, Dilma Rousseff (shown). The senate has 48 hours to prepare the impeachment papers, Rousseff has another 48 hours to prepare her defense, and then the actual date for the trial will be set, likely the week after the Rio 2016 Olympics have ended.

For all intents and purposes, however, the trial is already over. It will take just two-thirds of the senate to convict her, four fewer votes than were recorded on Wednesday. Unless something untoward occurs, she’ll be out of office, and be forced to move from the presidential palace, before the end of the month.

She has claimed innocence from the beginning. Accused of cooking the federal books in 2014 to help her reelection campaign, Rousseff has said she did nothing illegal and, besides, even if it was illegal, her predecessors did the same thing so she should be excused of wrongdoing. She has claimed further that the attempt to remove her from office, which began earlier this year, amounted to a coup — a heavily laden pejorative in Brazil and elsewhere in South America — and an attempt to distract attention away from Operation Car Wash (the investigation into the scandal involving government officials and top people at Petrobras, the state-owned oil company) that implicated 60 percent of the senate.

Reed Johnson, an observer of the events unfolding in Brasilia, the country’s capital, wrote in the Wall Street Journal that the whole affair is nothing more than a temper tantrum: “To her critics and allies alike … the descent of Brazil’s president was less about alleged accounting sleight-of-hand and far more about a comatose economy, a colossal political scandal, partisan payback from her congressional adversaries, and an electorate that feels betrayed by the president and disgusted with Brazil’s ruling elites.”

That “colossal political scandal” — the investigation was dubbed “Operation Car Wash” for the location where much of the bribes were laundered — has surrounded but never directly touched Rousseff, even though she served as head of Petrobras during the previous administration headed up by Luiz Inácio Lula da Silva (“Lula”). The investigation, now more than two years old, has put politicians and Petrobras officials behind bars, including some of the country’s top industrialists. And it continues to threaten those still under investigation.

When Rousseff was replaced temporarily by her second-in-command, Michel Temer, he made many promises that he has failed to keep. The first thing he did was ask his countrymen to trust him:

Trust me. Trust the values of our people and our ability to recuperate the economy…. It is essential to rebuild the credibility of the country abroad to attract new investments and get the economy growing again…. It is urgent to restore peace and unite Brazil. We must form a government that will save the nation…. It’s urgent to seek the unity of Brazil. We urgently need a government of national salvation.

And then he reached into the same barrel of pickles and nominated those being investigated to his new administration. Even though this transition occurred just a few months ago, three of those crooks have already been forced to resign. So the Olympics may end on August 21 but the corruption in Brazil continues on.

Thanks to “progressive” socialist policies instituted by “Lula” and continued by Rousseff, the country is now in retrogression: Unemployment and inflation are in double digits; price controls installed to make the economy look better to foreign investors have succeeded in taking many products off the market (now available at much higher prices in the black market); paychecks to police, firefighters, and other government workers have been delayed; and the country’s bond ratings have fallen to “junk” status along with that of Petrobras; and minimum-wage laws are keeping unemployment numbers unnecessarily high.

In Rio de Janeiro, some 85,000 police are trying to keep the Olympic athletes and visitors safe, with some success. There have been reports of athletes being robbed and beaten, however, and at least two people have been shot in or near the Olympic venues. Rio itself had to be bailed out by Brasilia to the tune of a billion dollars just as the games were about to begin.

Once the games are over, the real Brazil will surface once again: a country suffering under anti-freedom, anti-market policies instituted for political rather than economic purposes, all of which will continue under Temer’s reign, which will become permanent once Rousseff is officially ousted.

There are at least two ironies. First, Temer has been sanctioned for his own corruption and is not allowed to run for office, yet he will run the country through 2018. Second, Rousseff is being tried by corrupt officials interested in deflecting attention away from their own investigations under Operation Car Wash. In other words, a crook will be tried by crooks trying to avoid (or at least delay) being investigated for their own crooked behavior. In the meantime, the country will be run by another crook, packing his administration with even more crooks.

Readers can draw their own conclusions about any parallels between Brasilia and Washington, D.C.

Corruption Economy Elite Impeachment Inflation oil politician Price Controls progressive Unemployment
This entry was posted on Friday, August 12th, 2016 at 5:59 am and is filed under Crime, Politics. You can follow any responses to this entry through the RSS 2.0 feed. Both comments and pings are currently closed.
Many of the articles on Light from the Right first appeared on either The New American or the McAlvany Intelligence Advisor.