Oil Price Rise Only Temporary; Could Drop Back to Low $20s

This article appeared online at TheNewAmerican.com on Wednesday, August 10, 2016: 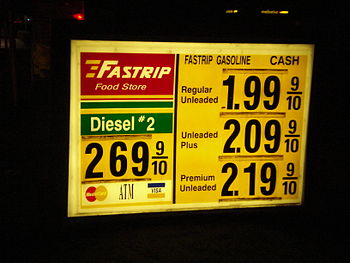 In light of record supplies of gasoline and crude oil, why are prices rising? After hitting a low of $26 a barrel in January, crude oil topped $52 a barrel in early June, only to drop below $40 a barrel last week. The recent rise back above $40 is a head fake, according to oil analyst Stephen Schork, editor of the daily subscription Schork Report. The recent bounce forced massive short covering by traders convinced oil was headed back down to the $20s and had nothing to do with the fundamentals.

The fundamentals, according to Schork, are bearish for oil (and gasoline) prices, and not likely to change any time soon. Even the Energy Information Administration (EIA), the government’s watchdog agency in charge of predicting the future, has been forced to revise downward its estimates of the price of oil and gas for the rest of the year and into 2017.

The report from the EIA on July 29 showed crude oil inventories at 522.5 million barrels, “historically high levels for this time of year.” This despite the fact, as Schork noted, “We’re in the midst of the strongest demand season ever. Gasoline demand has never been stronger.”

Apparently that strong demand (national park visits are setting records this year) hasn’t dented the overhang. In a conversation with Howard Gold, another oil industry analyst who is also bearish on the price of oil and gas, Schork said: “We know there is a massive glut of oil out there. We have oil sitting in tanks here in the United States … oil sitting in tankers off the coasts of Iran, Singapore [and] Texas,” adding that “as long as the Saudis [which just reported record levels of output] and the Iranians [who are almost back to pre-sanction oil production levels] continue to pump oil, continue to fight for market share, as long as they continue to put oil on the market, the market [will remain] glutted.”

So, how low can they go? Already prices at the pump have dropped in many places below $2 a gallon once again, with the EIA predicting $1.95 a gallon on average for the rest of the year. That’s down from their previous estimate of $2.07. With the price falling so fast it’s hard for the EIA to keep up.

Schork thinks crude oil will test the $26 a barrel level set the first of the year, adding: “I don’t think we’ll hold those lows. I do think we can take another hit lower.” Asked if he though oil prices could go into the low $20s, Schork replied, “I wouldn’t rule it out.”

This exacerbates problems faced by Venezuela, Ecuador, Algeria, and especially Saudi Arabia, which are continuing to fund their cash-flow deficits by borrowing or liquidating what remains of their foreign currency reserves. Estimates are that the OPEC cartel will see its revenues drop by at least another $300 billion this year.

With rigs coming back online in the United States, increasingly efficient cars and trucks coming to showrooms, and impressive technological advances helping America’s oil industry bring its break-even points ever lower, OPEC’s plan to force producers in the West to leave the field continues to fail. Consumers can expect lower oil, natural gas, and gasoline prices for the foreseeable future. They can also enjoy watching the increasing pain that OPEC is suffering as their attempt to manipulate the oil market to their advantage works against them.

Cartel Currency Deficit Energy oil Oil Industry Oil Prices OPEC
This entry was posted on Thursday, August 11th, 2016 at 4:31 am and is filed under Energy, Free Market. You can follow any responses to this entry through the RSS 2.0 feed. Both comments and pings are currently closed.
Many of the articles on Light from the Right first appeared on either The New American or the McAlvany Intelligence Advisor.