Czech President: “Citizens Should Arm Themselves”

This article appeared online at TheNewAmerican.com on Wednesday, August 3, 2016: 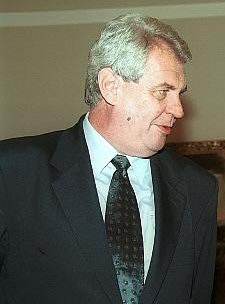 Reflecting a startling change of heart, Czech Republic President Miloš Zeman, once opposed to private civilian ownership of firearms for self-defense, told local Czech newspaper Blesk: “Earlier I spoke often about limiting the ability [of citizens] to have large quantities of weapons. But after the terrorist attacks [in France], I have changed the idea.” He is now pushing the Czech parliament to adopt a new law that would allow citizens to purchase, keep, and use firearms as necessary.

Zeman is also calling for a wall to be built along the country’s borders (the country is bordered by Germany, Austria, Slovakia, and Poland), and the expedited deportation of “failed asylum seekers.”

Zeman is hardly alone in his observations. Jonathan Miller, an elected council member in the French village of Caux, wrote that the attack in Nice has “shaken France to the brink of a terrifying escalation” and that France “may be on the edge of something resembling a civil war.” When Miller was asked why the membership in a local gun club quadrupled since Nice, he responded, “They’re getting ready for a war.” He added: “I talk to a lot of people at every level of French society and I am detecting a change of mood. And the mood is turning nasty … [I am] no longer taking for granted that they will put up with this much longer.”

Interest in obtaining the means of self-defense is happening in Germany as well, with requests for self-defense weapon permits hitting record highs. Because of drastic gun-control measures, the weapons being sought are non-lethal, such as guns that fire blanks and not real bullets, flare guns, and guns that expel noxious gases. Demand for pepper spray canisters has increased by 600 percent, while demand for private security services has increased dramatically as well.

In Austria, the situation wasn’t helped any by recent police reports that one in every three criminals apprehended is a foreigner, while in Vienna proper, it’s nearly one in every two. Women are increasingly seeking tools for self-protection, according to Gerhard Fuchs, a gunsmith with a shop in Innsbruck. “Women customers include waitresses that need to get home in the evening, and women who walk dogs regularly in the evening. We are also seeing some coming in to buy them for their daughters,” he said.

In contradiction to the new reality, the European Union (EU) has predictably moved to restrict private ownership of firearms even more drastically. In kneejerk reaction to the Paris attacks last November, the EU announced that it was expediting implementation of its European Firearms Directive, which would place semi-automatic weapons already in the hands of private citizens in the same category as fully automatic weapons, thus banning them altogether and turning citizens into criminals for owning them. The National Rifle Association’s Institute for Legislative Affairs (NRAILA) declared, “It is deplorable that the EU would seek to further restrict access to firearms when so many Europeans are finding it necessary to exercise their human right to self-defense.”

Sebastian Gorka has been on the front line in the war against Western Civilization by Islamist radicals for decades. He served as the Major General Matthew C. Horner Distinguished Chair of Military Theory at the Marine Corps University in Quantico, Virginia, and now teaches at the John F. Kennedy Special Warfare Center at Fort Bragg in North Carolina as well as the FBI’s Counterterrorism Division. His book Defeating Jihad: The Winnable War, just released in April, spells out how the war against the West can be won (by the West). The front line of that war, however, has moved from Paris and Munich to the United States, said Gorka: “The frightening reality is that the battle has truly come to the homeland. We’re all on the front line in this war. And, God forbid, if you are targeted in an attack, remember your options.”

One of the most important of those options is obtaining a concealed weapon permit and then preparing for an attack. During a June radio interview, Gorka cautioned citizens to apply for such a permit “only if you are prepared to take all the responsibility that being a licensed concealed carrier means,” and that “San Bernardino proves it. We are all on the front lines of this war.”

The new reality expressed by the Czech president is leading citizens across the globe to seek the means to defend themselves. In some countries of Europe, those means are limited to gas-emitting pistols and those shooting blanks. In the United States, the options are vastly greater. Americans are increasingly taking advantage of those options as the war moves to this country.

attacks defense European Union firearms France Germany guns Islam National Rifle Association radical reality Terrorism weapons
This entry was posted on Thursday, August 4th, 2016 at 4:51 am and is filed under Religion, Second Amendment. You can follow any responses to this entry through the RSS 2.0 feed. Both comments and pings are currently closed.
Many of the articles on Light from the Right first appeared on either The New American or the McAlvany Intelligence Advisor.