Koch Brothers Not Funding Trump May Work to Trump’s Advantage 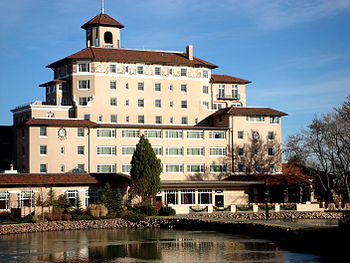 The Broadmoor Hotel in Colorado Springs, site of the Koch’s shindig

Some 400 wealthy Republican donors, including 100 new ones, attended the Koch Brothers’ Freedom Partners Chamber of Commerce biannual meeting at the Broadmoor Hotel in Colorado Springs over the weekend. One of those who could have attended, but wasn’t invited, was Republican presidential candidate Donald Trump.

Trump was in Colorado Springs on Friday for a campaign stop in the afternoon and a presentation in Denver that night. He could have dropped in, but he wasn’t on the agenda. Instead the donors were treated to presentations and policy discussions from three Republican governors, four Republican senators, and four members of the House, including Speaker of the House Paul Ryan.

In Trump’s absence, Charles Koch made clear the network’s new direction: focusing on keeping and perhaps strengthening the present Republican Party’s slim advantage in the Senate. Koch stated, “We have an uphill battle … the majority of Americans are focused on … an increasingly stagnant, two-tiered society, with the rich and politically-connected doing well and most everybody else stuck down below. People have lost their optimism … they’re frustrated and disillusioned … they’re looking for answers.”

Koch made it clear that neither Trump nor Clinton would be ones to provide them:

Unfortunately [people are] looking in the wrong places. They’re looking to politicians. To me, the answers they’re getting are frightening because these answers will make matters worse … some of these solutions … would not just make them a little worse, but much worse…. The good news is that we have built this network for just such a condition. That puts us in a position to make progress in spite of the current political situation where, in some cases, we don’t really have good options.

He then clarified the purpose of the Freedom Network: Only about a third of the funds raised by the network would go to direct political action, with the balance put toward education on immigration policy and government regulation.

Each of the donors was invited based upon their ability, and their promise, to give at least $100,000 to the network. Last year it was estimated that the network would raise about $900 million, with most of it to be focused on the upcoming presidential election. However, that number has been reduced to $750 million, with only about $250 to $280 million of it going into political advertising. Network chairman Mark Holden, general counsel and senior vice president of Koch Industries, told reporters on Saturday that the network has “no intention to go after Donald Trump” and would run ads critical of Clinton only if strategists decided they would help Republican senatorial candidates in critical states with close races.

On Saturday Donald Trump tweeted: “I turned down a meeting with Charles and David Koch. Much better for them to meet with the puppets of politics, they will do much better.”

Trump polished his “puppet-free” political position over the weekend by announcing a campaign wherein he would match dollar-for-dollar every contribution made to his campaign: “Our fundraising department can barely keep up. I am going to personally match your donation today, and every day you donate up to midnight [July 31], up to $2 million.”

There could well be a “coattail” effect if the Kochs’ network is able to keep and even expand the Republican majority in the Senate. Ads tying Democrat senatorial candidates to Clinton could help Trump’s campaign whether intended to or not.

In addition, Trump’s independence from those “puppets of politics” keeps Clinton from claiming that The Donald is just a mouthpiece for the Koch Brothers.

Colorado Democrat Donald Trump Koch Brothers Marco Rubio Paul Ryan politics Republican Senate
This entry was posted on Monday, August 1st, 2016 at 10:16 am and is filed under Politics. You can follow any responses to this entry through the RSS 2.0 feed. Both comments and pings are currently closed.
Many of the articles on Light from the Right first appeared on either The New American or the McAlvany Intelligence Advisor.