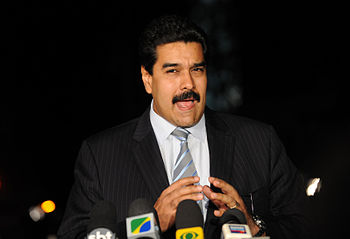 That’s why he is doing everything he can to stall a recall referendum that would lead to his recall before then. Accordingly he is utilizing his electoral council — the CNE — to stall, delay, and dither, letting deadlines for approval pass. The council has complied, having been staffed with Maduro’s people, taking months to validate some 1.8 million signatures that were collected last May by the opposition. That petition needs only 200,000 valid signatures to force a recall election before January, but the CNE has complained that some of those 1.8 million signatures were fraudulent. It missed last Tuesday’s deadline, and has threatened not to certify the petition at all if protestors continue their marches on its offices in downtown Caracas.

Maduro has asked his Supreme Court, also staffed with his own people, to disqualify the opposition party and ban it from politics altogether.

In the meantime, Maduro’s police are arresting opposition leaders and torturing them and threatening them with death in order to elicit confessions from them, according to Human Rights Watch.

If the CNE finally approves the initial petition, scheduled for next Monday, that sets in motion a national recall referendum that must contain the signatures of at least 20 percent of the electorate, some four million people. Under Madura’s rules those signatures must be collected in three days. Assuming that happens, the CNE will then take its time validating them. If Madura’s stalling is successful, there will be no recall vote before the general election in January.

Polls show that, given the chance, Venezuelans would vote Maduro out of office, 2-1. He simply cannot afford to let that happen.

The consequences are predictable: There will be more protests (there were protests in three cities on Wednesday, with more scheduled for Thursday and Friday), more frustration at the foot-dragging, and possibly real violence. Opposition party leader Henrique Capriles told the Caracas protestors, “The people don’t want violence, but the people’s patience is running out. That’s why we demand a democratic solution.”

A “democratic solution” is hardly likely in light of Maduro’s control of every lever of political and military power. The only thing that will end Maduro’s madness is a miracle (always possible) or outside intervention (more likely). According to Nil Nikandrov, writing for the Center for Research on Globalization, the American CIA and the U.S. Defense Intelligence Agency are waiting for the protests to turn sufficiently violent and bloody to justify intervention. And such intervention is made more likely because of the presence of oil. Wrote Nikandrov:

A small victorious war in Venezuela, a country with a dictatorial, almost Marxist regime, looks very tempting. The energy aspect of the hypothetical victory — the reestablishment of the dominant position of the U.S. in the Venezuelan oil sector — is always touched upon by American intelligence personnel.

If the planned protests turn sufficiently violent and bloody, and if the reported plans by the CIA and the DIA to intervene as a result actually take place, there will still be no long-term solution to Venezuela’s problems. What it would take is a cultural change from relying on the government to self-reliance in an environment of the rule of law, enforcement of contracts, protection of private property, and incentives to produce.

That is a stretch. In the meantime Venezuelans will continue to suffer in an economy expected to decline by another eight percent this year (on top of last year’s six-percent decline) with political and military repression sending the once-prosperous country back to the dark ages.

CIA consequences dictator Economy elections Establishment Fraud Military politics Polls power Private Property recall rights Supreme Court threat violence
This entry was posted on Friday, July 29th, 2016 at 5:53 am and is filed under Crime, Politics. You can follow any responses to this entry through the RSS 2.0 feed. Both comments and pings are currently closed.
Many of the articles on Light from the Right first appeared on either The New American or the McAlvany Intelligence Advisor.