This article appeared online at TheNewAmerican.com on Tuesday, June 28, 2016: 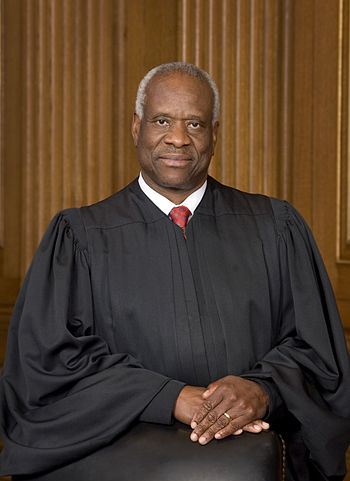 Clarence Thomas, Associate Justice of the Supreme Court of the United States

On Monday the Supreme Court handed down a ruling, 6-2, that people convicted of domestic abuse can lose their Second Amendment rights to keep and bear arms. The only justice who even seemed to care about that was Justice Clarence Thomas, who dissented. Sonia Sotomayor also dissented, for different reasons.

Two Maine residents were convicted under state law — similar to laws in 33 other states — a decade ago of committing domestic violence. When it later turned out that they owned firearms, they were charged under a federal law prohibiting them from owning them. The case moved up through the system and finally reached the Supreme Court in February of this year.

That the case had obvious Second Amendment implications was only recognized by Justice Clarence Thomas, who, ending 10 years of silence during Supreme Court oral arguments, questioned one of the prosecuting attorneys in Voisine et al v. United States. He asked her: “Ms. Eisenstein, just one question: can you give me — this is a misdemeanor violation, it suspends a constitutional right. Can you give me another area where a misdemeanor violation suspends a constitutional right?”

The question apparently stumped her, and Thomas continued: “[This is a] misdemeanor violation of domestic conduct that results in a lifetime ban on possession of a gun which, at least of now, is still a constitutional right.”

When the final decision was handed down on Monday, Sotomayor dissented, as well, going along with two of the three main arguments that Thomas made in his dissent, but she backed away when he railed against the decision because it unnecessarily, in his opinion, violated precious Second Amendment rights. In other words, Thomas was the only one of the eight justices who saw the negative implications of a ruling that turned a state conviction of a misdemeanor into an abrogation of the Second Amendment.

The decision not only validated the removal of Second Amendment protections, but expanded the reasons for removing them as well. Reason.com summed up the results:

In a 6-2 opinion issued today, the U.S. Supreme Court extended a federal statute which bans firearm possession by any person convicted of a “misdemeanor crime of domestic violence” to cover those individuals who have “misdemeanor assault convictions for reckless (as contrasted to knowing or intentional) conduct.”

In his dissent Thomas reviewed the thinking behind the federal law enacted by Congress years ago, but then questioned its expansion that resulted in the present infringement of the Second Amendment:

Federal law makes it a crime for anyone previously convicted of a “misdemeanor crime of domestic violence” to possess a firearm….

In this case, petitioners were convicted under [that law] because they possessed firearms and had prior convictions under Maine’s statute….

The question presented is whether a prior conviction … can strip someone of his right to possess a firearm. In my view [that conviction under Maine law] does not qualify as such an offense, and the majority errs in holding otherwise.

He explained that the federal law banning firearm possession as a result of a conviction of domestic violence is already excessively broad, and that the court’s reading made it even worse:

[The federal law] is already very broad. It imposes a lifetime ban on gun ownership for a single intentional nonconsensual touching of a family member. A mother who slaps her 18-year-old son for talking back to her — an intentional use of force — could lose her right to bear arms forever if she is cited by the police under a local ordinance. The majority seeks to expand that already broad rule to any reckless physical injury or nonconsensual touch.

We treat no other constitutional right so cavalierly. In construing the statute before us so expansively so that causing a single minor reckless injury or offensive touching can lead someone to lose his right to bear arms forever, the court continues to relegate the Second Amendment to a second-class right.

Even if Justice Antonin Scalia, who died in February, had been present, it wouldn’t have changed the outcome. He and Thomas would have been the only two voices supporting the Second Amendment. The decision would have ended the same: 6-3 against it.

In the context of the current presidential race, Democrat contender Hillary Clinton has made clear her intent that, starting on the very first day of her presidency, she would continue to wage war on the Second Amendment. In the next four years, she would likely have the opportunity to nominate more than one new anti-gun justice to the court to replace those retiring or dying. This would cement into place the court’s present predilection against it, continuing its policy of relegating it to a “second-class” right.

Antonin Scalia Clarence Thomas Constitution Crime firearms Hillary Clinton justice Second Amendment Sonia Sotomayor Supreme Court War
This entry was posted on Wednesday, June 29th, 2016 at 5:19 am and is filed under Uncategorized. You can follow any responses to this entry through the RSS 2.0 feed. Both comments and pings are currently closed.
Many of the articles on Light from the Right first appeared on either The New American or the McAlvany Intelligence Advisor.