This article appeared online at TheNewAmerican.com on Friday, June 24, 2016: 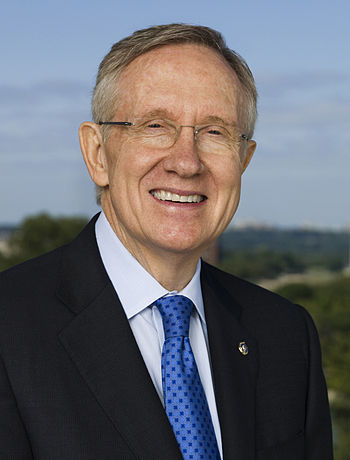 Following the failure of any of the four gun bills presented earlier this week in the aftermath of the Orlando massacre, Senate Minority Leader Harry Reid (shown) told the Senate how he really feels about the National Rifle Association:

The decades-long love affair that has benefited both the NRA and Harry Reid is now officially over. NRA spokeswoman Jennifer Baker confirmed it:

Sen. Reid lies and exploits victims of horrific terrorist attacks because he can’t win the argument based on facts….

Harry Reid exemplifies what the American people hate about politicians, and Nevadans will be better served when they have a senator who will work to keep them safe from terrorism and who respects the Constitution they swore to uphold.

A week earlier Reid officially announced the breakup during a speech from the Senate floor:

More than 80% of Americans want to close so-called terror loopholes, preventing people on terror watch lists from purchasing firearms. Yet, in spite of the public’s demand for action, Senate Republicans continue to cower — cower — before the NRA and the Gun Owners of America. The NRA is bad, really bad. Gun Owners of America is even worse than bad.

In the mid-1990s the relationship was much cozier: Reid voted for NRA priorities, and the NRA endorsed him, blessing him with funds and high ratings. In 1993, and then again in 2004, Reid voted against the ban on “assault rifles” even though most Senate Democrats supported it. In 2005, he voted for a measure that insulated gun manufacturers and dealers against lawsuits from victims of gun violence seeking deep pockets. For this the NRA rated him a “B” legislator and supported him financially in his reelection campaign.

In turn the senator bent over backward to obtain the land and the funding for the Clark County Shooting Park located not far from downtown Las Vegas. The NRA was positively ebullient over the range, which Chris Cox, the NRA’s executive director of its Institute for Legislative Action, called “one of the finest in the world.” It’s located on 2,900 acres of what was once federal land and was built with the help of millions of taxpayer funds redirected from the Southern Nevada Public Lands Management agency. Wrote the NRA at the time it opened in the summer of 2010:

It took decades of hard work.… It also took both land and money to make it happen, and for that the people of Clark County have U.S. (then) Majority Leader Harry Reid to thank.

Sen. Reid worked for years to secure the transfer to Clark County of the now-former federal land the range complex now occupies. Further, he secured $61 million … to fund the facility’s development.

His dedication to this project is just one of the ways Sen. Reid has demonstrated his support for gun owners and the Second Amendment.

The NRA’s executive vice president Wayne LaPierre joined Cox at the grand opening, gushing that Reid “is a true champion of the Second Amendment back in Washington, D.C.”

Reid’s support for various NRA priorities began to fade over time. In 2010, the NRA refused to endorse him in that reelection campaign and the flow of funds from the group ended. In March of 2015, Reid announced that he would retire when his term ends in 2016, and by October he had completed the turn against his former supporter. Following the massacre at the Umpqua Community College in Roseburg, Oregon, he took on the NRA from the Senate floor, obliquely blaming the group for the tragedy:

If we don’t take action, we are [as] equally responsible for these innocent deaths as the sick individuals who plot and carry out these horrific massacres.

I’ve started to reach out to [Republican] senators and [talk] about what can be done to advance the cause of background checks while [they] are in charge for the next year or so.

But one thing is clear: to pass background checks we need Republicans to stop acting as puppets for the NRA.

The Reid-NRA divorce was finalized in December when Reid told senators:

Now, there was a time in my legislative career that I tried to work with the National Rifle Association. But the NRA today is a far cry from a sportsman’s organization that I once supported. The NRA once called mandates for background checks reasonable. I’m not making this up. Now they are transformed into a quasi-militant wing of the Republican Party.

Now free from having to ingratiate himself to his former supporter, Reid has exposed himself as the self-aggrandizing politician that he has always been.

Constitution Democrat firearms Harry Reid NRA rights Second Amendment Senate
This entry was posted on Tuesday, June 28th, 2016 at 5:54 am and is filed under Politics, Second Amendment. You can follow any responses to this entry through the RSS 2.0 feed. Both comments and pings are currently closed.
Many of the articles on Light from the Right first appeared on either The New American or the McAlvany Intelligence Advisor.